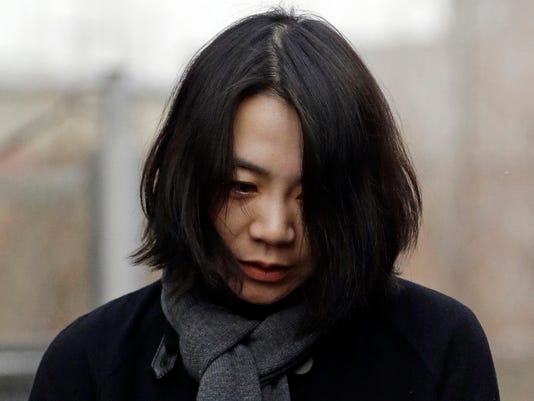 Seoul, South Korea — Four South Korean officials will be punished for improper conduct during an investigation into a former Korean Air Lines executive who forced a flight to return over a bag of macadamia nuts, the Transport Ministry said Monday.

The punishments could include dismissals, salary reductions or formal reprimands, according to Shin Eun-chul, the official who headed the ministry’s internal investigation. The ministry also issued warnings to four other lower-ranking officials who were involved in the investigation.

Earlier this month, then-Korean Air executive Cho Hyun-ah, the daughter of the airline’s chairman, forced a plane that was preparing to take off in New York to return to the gate and kicked off the chief flight attendant because she had been served nuts in a bag, not on a plate.

The ministry has been under fire following revelations that some officials leaked information and committed other improper acts during the investigation.

One of the officials to be reviewed for punishment was arrested Friday over allegations that he leaked information about the ministry’s probe to a current Korean Air executive, surnamed Yeo, through several telephone conversations and text messages.

The ministry found other officials responsible for allowing Yeo to attend the ministry’s questioning of the flight attendant forced off the plane and failing to interview other first-class passengers, one of whom who told prosecutors that Cho had assaulted and threatened the flight attendant.

A Seoul court is expected to decide Tuesday whether to issue an arrest warrant for Cho, who resigned as vice president at the airline earlier this month amid mounting public criticism over the incident. Prosecutors are also seeking to arrest Yeo over suspicions that he pressured airline employees to cover up the incident.