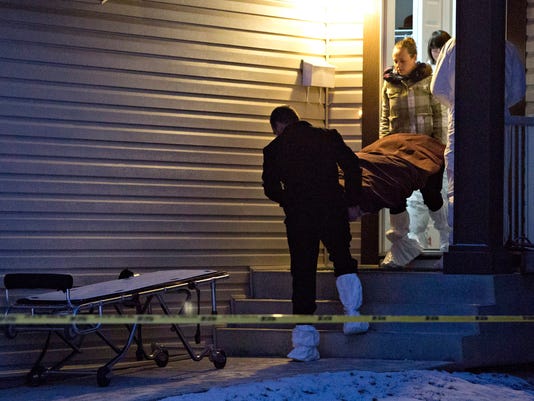 The body of a victim is carried out of a north Edmonton home in Edmonton, Alberta, Dec. 30, 2014. Nine people, including seven adults and two young children, were found dead at three separate crime scenes in what Edmonton's police chief on Tuesday called a "senseless mass murder."(Photo: Jason Franson / AP)

Edmonton, Alberta — Police are investigating what prompted a man to kill six adults and two young children in Edmonton before taking his own life in a horrific rampage described as the western Canadian city's worst mass shooting.

Scott Pattison, a police spokesman, said the suspect's criminal history indicates it was a case of domestic violence but officials have not yet confirmed the relationship of the victims to the shooter. He said police are waiting for the medical examiner to confirm the identities of all the victims.

Police did not release the name of the suspect, but said the man was well-known to police and had a criminal record dating back to September 1987. He had been arrested in in November 2012 and charged with domestic and sexual assault.

"It's all related to the history, the fact that he was charged with uttering threats previously and it appears that the murders were planned and deliberate," Pattison said. "I can't confirm the relationships of the individuals in the house. But once the medical examiner's office confirms the identities of the remaining victims and the suspect, things will become clearer."

Cyndi Duong, 37, was found fatally shot in a home in south Edmonton on Monday, while two men and three women between the ages of 25 and 50, and a girl and a boy — both under the age of 10 — were found dead a few hours later at a home in the northeast.

The suspect was found dead by his own hand in a restaurant in the Edmonton bedroom community of Fort Saskatchewan on Tuesday morning. A police tactical team had surrounded the area and reportedly smashed through the front of the restaurant with a vehicle before finding the suspect dead.

Duong's body was found around 7 p.m. Monday when police responded to a report of a man entering the south-side home, opening fire and fleeing, Knecht said.

An hour and a half later, officers responded to a call reporting a "depressed and over-emotional" man at a northeast residence in a quiet cul de sac. It was the same home where the suspect had been arrested two years earlier and charged with domestic and sexual assault.

When officers arrived, no one answered the door, Edmonton Police Chief Rod said at a late night news conference Tuesday. They searched the exterior of the home but found nothing overtly suspicious and did not go inside.

Hours later, police were contacted by a second person and returned to the residence. When they went inside, they found a scene of carnage with seven bodies.

Addressing why police did not enter the home the first time, Pattison said they "can't just breach into the door or enter the residence without due cause."

He also said it appears the killings would not have been prevented had the police entered the northeast home the first time. "The individual wasn't spotted at the time. But it appears that the individuals that were in the house, the deceased, had been there for some time," he said.

He said autopsies will be conducted Thursday.

Neighbor Moe Assiff said he saw officers come out and talk to a woman sitting with a man in a white car outside the northeast house.

"She just let out a hysterical scream. It was eerie," Assiff said. "She was screaming about her kids: 'My kids! The kids!,' grabbing her hair and trying to pull her hair out. The cops then ushered her down the road into a police cruiser."

Outside the restaurant where the suspect's body was found, police found a parked black SUV that they say was seen near the location of the first shooting. Knecht said the suspect had a business interest in the restaurant, but would not say if he was the owner.

Investigators have determined the 9 mm handgun used in the killings was a registered weapon that had been stolen in Surrey, British Columbia, in 2006.

In Edmonton, a city of 878,000 people, mass murders are extremely rare.

Knecht said the case was the worst mass killing in the city since at least 1956 when John Etter Clark, a provincial politician who served as a member of the Legislative Assembly of Alberta, killed his wife, son, three daughters and an employee of their family farm before taking his own life. Clark had been suffering from frequent nervous breakdowns in the years before the killings.