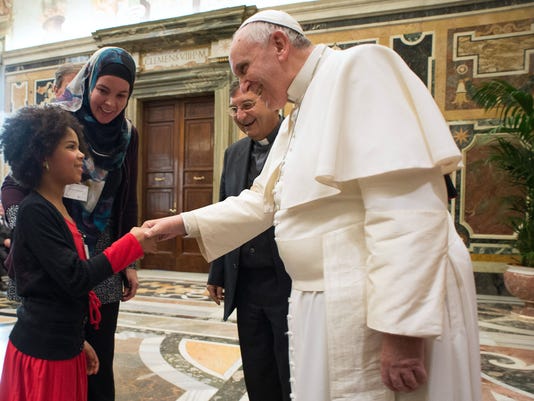 Pope Francis shakes hands with a girl during a meeting organized by the Pontifical Institute of Arab and Islamic Studies in the Clementina Hall in the Vatican.(Photo: Getty Images)

Vatican City — Pope Francis says the most effective antidote to violence among Christians and Muslims is learning about each other and then accepting differences.

Francis also told participants Saturday of a meeting promoted by the Pontifical Institute of Arab and Islamist Studies that only by carefully listening can interreligious dialogue make progress.

He said “patience and humility” are essential for deepened Islamic-Christian dialogue while merely superficial dialogue will only yield “stereotypes and preconceptions.”

Francis added: “The most effective antidote to every form of violence is education about discovering and accepting difference as richness and fertileness.”

He did not mention of the deadly jihadi attacks in supposed defense of Islam this month in France, but said “more than ever one feels the need” for such education.