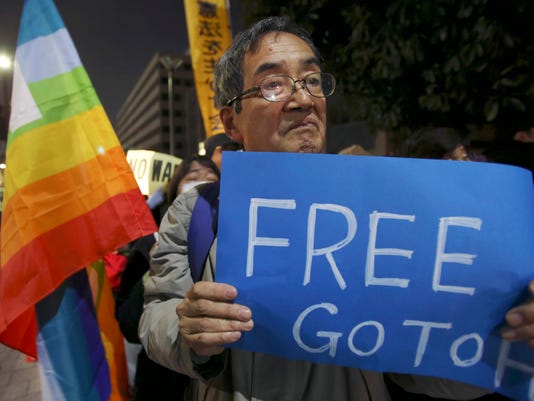 A protester in front of Prime Minister Shinzo Abe’s residence in Tokyo on Sunday. Some blame Abe’s policies for the hostage crisis.(Photo: Koji Sasahara / AP)

Tokyo — From the prime minister to ordinary people, Japanese were shocked Sunday at a video purportedly showing one of two Japanese hostages of the extremist Islamic State group had been killed.

With attention focused on efforts to save the other hostage, some also criticized Prime Minister Shinzo Abe’s drive for a more assertive Japan as responsible for the hostage crisis.

A somber Abe appeared on public broadcaster NHK early Sunday demanding the militants release 47-year-old journalist Kenji Goto unharmed. He said the video was likely authentic, although he added that the government was still reviewing it. He offered condolences to the family and friends of Haruna Yukawa, a 42-year-old adventurer taken hostage in Syria last year.

Abe declined to comment on the message in the video, which demanded a prisoner exchange for Goto. He said only that the government was still working on the situation and reiterated that Japan condemns terrorism.

Yukawa’s father, Shoichi, told reporters he hoped “deep in his heart” that the news of his son’s killing was not true. “If I am ever reunited with him, I just want to give him a big hug,” he said.

President Barack Obama condemned what he called “the brutal murder” of Yukawa and offered condolences to Abe. Obama’s statement didn’t say how the U.S. knew Yukawa was dead.

“The U.S. intelligence community has no reason to doubt the authenticity of the video,” said Brian Hale, spokesman for the U.S. director of national intelligence.

The United Nations Security Council issued a statement that “deplored the apparent murder” of Yukawa, declaring that the Islamic State group “must be defeated and that the intolerance, violence and hatred it espouses must be stamped out.”

The Associated Press could not verify the contents of the video message, which varied greatly from previous videos released by the Islamic State group.