Jordan set for swap to save pilot

Jordan set for swap to save pilot 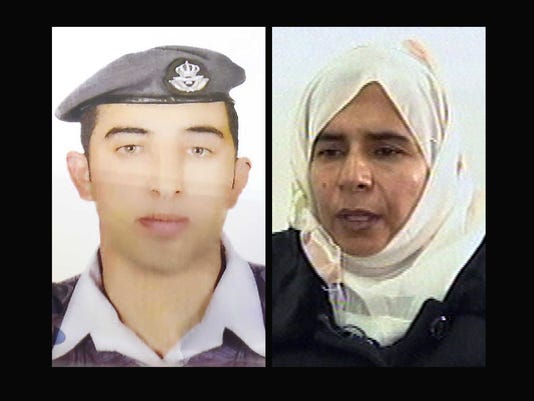 This combination of two photographs shows the detail of a poster of an undated photograph of Jordanian pilot Lt. Muath al-Kaseasbeh, left, used during a demonstration calling for his release from the Islamic State group and a still image from video, right, of Sajida al-Rishawi, an Iraqi woman sentenced to death in Jordan for her involvement in a 2005 terrorist attack on a hotel that killed 60 people. Jordan said Jan. 28, 2015, it is willing to swap the woman held on death row in Jordan for the Jordanian pilot captured in December by extremists from the Islamic State group.(Photo: AP)

Amman, Jordan — Jordan is willing to swap an Iraqi woman prisoner involved in deadly 2005 hotel bombings for a Jordanian pilot captured in December by extremists from the Islamic State group, a government spokesman said Wednesday.

Such a swap would run counter to Jordan’s hardline approach toward Islamic militants and to the position of its main ally, the United States, of not negotiating with extremists. An exchange also would set a precedent for negotiating with Islamic State militants, who in the past have not publicly demanded prisoner releases.

However, Jordan’s government faces domestic pressure to bring the pilot home, while its participation in a U.S.-led military coalition against the Islamic State group is widely unpopular among Jordanians.

The government spokesman, Mohammed al-Momani, did not say whether a swap would actually take place. He also made no mention of Japanese journalist Kenji Goto, who is also being held by the Islamic State group.

Jordanian Foreign Minister Nasser Judeh later wrote on his Twitter account that Jordan asked for proof that the pilot, Lt. Muath al-Kaseasbeh, is alive. “We have asked for some time for evidence of the health and safety of the hero Muath, but didn’t receive it,” he wrote.

Efforts to release the pilot and the journalist gained urgency with the release Tuesday of a purported online ultimatum claiming the Islamic State group would kill both hostages within 24 hours if the Iraqi woman was not freed.

Al-Rishawi was sentenced to death in Jordan for her involvement in a 2005 al-Qaida attack on hotels in Amman that killed 60 people. Her release would be a major propaganda coup for the Islamic State group.

Jordan is reportedly in indirect talks with the militants through religious and tribal leaders in Iraq to secure the hostages’ release.

The chairman of the foreign affairs committee of Jordan’s parliament, Bassam Al-Manasseer, has been quoted as saying that Jordan and Japan would not negotiate directly with the Islamic State group and would not free al-Rishawi for the Japanese hostage only.

The pilot’s father, Safi al-Kaseasbeh, has repeatedly criticized the Jordanian government’s handling of the crisis, saying more must be done to bring his son home.

“I contacted the Turkish authorities after I found that the Jordanian government is not serious in the negotiations,” he told The Associated Press, speaking after the government raised the possibility of a swap.

“The government needs to work seriously, the way one would do to free a son, like the Japanese government does,” the father said.

The pilot’s brother, Jawad al-Kaseasbeh, said the family is still “waiting for any word from the Jordanian government.”

On Tuesday evening, about 200 of the pilot’s relatives protested outside the prime minister’s office in Amman, chanting anti-government slogans and urging that it meet the captors’ demands.

In Tokyo, the mother of the Japanese hostage appealed publicly to Japan’s premier to save her son. Junko Ishido read to reporters her plea to Prime Minister Shinzo Abe, which she said she sent after both Abe and Japan’s main government spokesman declined to meet with her.

“Please save Kenji’s life,” Ishido said, begging Abe to work with the Jordanian government until the very end to try to save Goto.

“Kenji has only a little time left,” she said.

“I have been trying to keep my hopes up and believe that Mr. Goto will return. I have this faith within me,” said Seigo Maeda, a 46-year-old friend of Goto.

The militants reportedly have killed a Japanese hostage, Haruna Yukawa, and the crisis has stunned Japan.

Although many in Japan are critical of the two men for going to Syria, Goto’s friends and supporters have launched a social media campaign calling for his release.

Tuesday’s video resembled a message released over the weekend that purportedly withdrew a demand for $200 million ransom for Goto and Yukawa made in an earlier message.

The latest message condemns Jordan for not releasing al-Rishawi, saying that unless she is freed within 24 hours, the pilot, followed by Goto, will be killed. It says it is the group’s last message.

Al-Kaseasbeh, 26, was seized after his Jordanian F-16 crashed in December near the Islamic State group’s de facto capital Raqqa in Syria. He is the first foreign military pilot they have captured since a U.S.-led coalition that includes Jordan began an aerial campaign against the Islamic State group in August.

This is the first time that the group has publicly demanded the release of prisoners in exchange for hostages. Previous captives may have been released in exchange for ransom, although the governments involved have refused to confirm any payments were made.

Goto, a freelance journalist, was captured in October in Syria, apparently while trying to rescue Yukawa, 42, who was taken hostage last summer.

The mother of another Jordanian prisoner, Ziad al-Karboli, said her family was told the Islamic State group also wants his release as part of a swap, but it is unclear if that was related to a possible deal involving the Japanese hostage.

Al-Karboli, an aide to a former al-Qaida leader in Iraq, was sentenced to death in 2008 for killing a Jordanian citizen.

The Islamic State group broke with al-Qaida’s central leadership in 2013 and has clashed with its Syrian branch, but it reveres the global terror network’s former Iraqi affiliate, which battled U.S. forces and claimed the 2005 Amman attack.