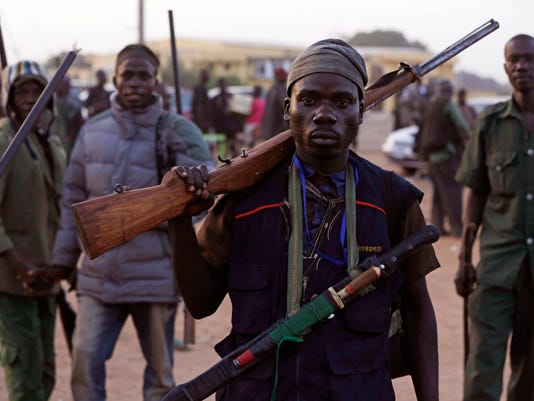 Maiduguri, Nigeria — A Chadian warplane and ground troops drove Boko Haram fighters from a Nigerian border town, leaving it strewn with the bodies of the Islamic extremists, witnesses said Friday. The African Union moved to send ground forces to Nigeria and the U.S. said it would assist.

Thursday’s fighting marked the first such action by foreign troops on Nigerian soil to fight the Islamic extremists.

The African Union chairwoman, at an AU summit in Ethiopia, called for deployment of 7,500 African troops to fight the spreading Islamic uprising by Nigeria’s home-grown extremists. A senior U.S. official told reporters that the United States government will take a role in the fight against Boko Haram.

“We are prepared to provide technical support, training and equipment to fight the Boko Haram group. The group’s activity in the region has clearly affected our attention in Africa away from development,” said Linda Thomas-Greenfield, U.S. Assistant Secretary of State for Africa.

“We saw the fighter jet when it started shelling and bombarding the insurgents who were lodging mostly inside the local government secretariat and the district head’s palace,” he told The Associated Press.

He said the bodies of many Boko Haram fighters were still in the town Friday morning. Modu spoke by telephone after crossing the border from a Chadian village where he had sought refuge after Boko Haram seized Malumfatori at the end of October.

He said the Chadian jet had pursued fleeing fighters to the border, and that the bombardment was coordinated with Chadian ground troops, offering the fighters no escape.

A Nigerian military officer, who spoke on condition of anonymity because he was not authorized to speak to the press, confirmed the account. There was no immediate official word from Nigerian authorities about the Chadian offensive.

AU Chairwoman Nkosazana Dlamini Zuma called for the deployment of 7,500 troops to combat Boko Haram. She made the recommendation to the AU Peace and Security Council meeting of African leaders on Wednesday night in Addis Ababa, Ethiopia.

The vote on the planned deployment will be made during the two-day AU Heads of State Summit, which began Friday. Chad, Niger, Nigeria, Cameroon and Benin would be part of the joint Force.

The troops would be deployed under the Multination Joint Taskforce and would have a 12-month period of initial operation time. It would also be tasked with searching for, and freeing, all abductees, including the young girls abducted in Chibok in April 2014.

U.N. Secretary-General Ban Ki-moon, a guest at the AU summit, said: “The Boko Haram insurgency poses a clear danger to national, regional and international security. This group continues to kill Christians and Muslims, kidnap women and children, and destroy churches and mosques.”

“We will never forget the girls kidnapped from Chibok last April, and I will never stop calling for their immediate and unconditional release,” he said.

Nigeria’s President Goodluck Jonathan said Nigerian troops on Thursday recaptured several villages and the town of Michika in northeast Adamawa state. There was no way to immediately confirm the claim of a rare victory for the demoralized and ill-equipped Nigerian soldiers.

Jonathan, who is running in Feb. 14 elections, told a campaign rally Thursday in Yola, the Adamawa state capital, that “Michika local government was recaptured by our gallant forces today.”

He added, “We will soon recover all our territories … All of us here feel burdened, I feel so burdened about the excesses of Boko Haram.”

Adamawa state legislator Adamu Kamale complained Wednesday that he had appealed in vain for troops to fight insurgents rampaging since Jan. 23 through seven villages and Michika town. He said the extremists slit people’s throats, abducted dozens of people and burned and looted mosques, homes and businesses. He charged there was no response from the Nigerian military.