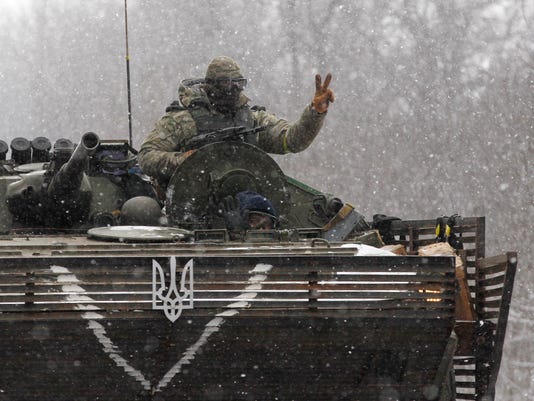 A Ukrainian soldier strikes a V-Victory sign driving on his vehicle on the road between the towns of Debaltseve and Artemivsk, Ukraine, Feb. 16, 2015.(Photo: Petr David Josek / AP)

Under a cease-fire agreement negotiated by the leaders of Ukraine, Russia, Germany and France, the warring sides are to begin withdrawing heavy weapons from the front line Tuesday. That plan already looks at risk, with the rebels saying they are not satisfied that conditions are in place for the process to go ahead.

Associated Press reporters in Luhanske, a government-held town 9 miles northwest of the bitterly contested railway hub of Debaltseve, heard sustained shelling Monday. Some of the artillery appeared to be outgoing, suggesting it was being fired by Ukrainian troops.

Debaltseve, still in government hands, remains in contention despite the cease-fire. The rebels insist the town should revert to their control because they have encircled it. A loaded Grad rocket launcher was seen pointing in the direction of Debaltseve, but it was not fired while AP journalists were present.

Observers from the Organization from Security and Cooperation in Europe, who are supposed to monitor the cease-fire, said Sunday that separatists denied them access to Debaltseve.

Despite the cease-fire that went into effect early Sunday morning, five Ukrainian troops were killed and 25 were wounded in the past 24 hours, Ukrainian military spokesman Andriy Lysenko said Monday.

Ukraine, however, blamed that attack on the rebels. The government-appointed police chief of the Donetsk region, Vyacheslav Abroskin, said the separatists shelled the town in order to derail the truce.

The cease-fire appeared to hold elsewhere. The city hall of the rebel capital Donetsk, which came under heavy artillery fire in the past week, said on Monday that there was no fighting in the area.

Ukraine and the West accuse Russia of arming and supplying manpower to the separatists and have imposed a range of economic sanctions to pressure Moscow into changing its course. Russia denies all suggestions it is directly involved in the war in Ukraine but the sheer amount of heavy weapons the rebels have belies that claim.

The cease-fire had raised cautious hopes for an end to the 10-month-old conflict, which has already claimed more than 5,300 lives. But Ukraine and rebel officials have already traded multiple accusations of attacks since then.

Both the separatists and the Ukrainian government insist they are committed to the cease-fire negotiated in marathon talks last week. But the Russian news agency Interfax quoted Basurin as saying Monday that conditions are not yet ready to pull back heavy weapons on Tuesday.

“We will begin pulling back equipment from the line of contact if we receive a certain signal, which is if the Ukrainians also do the same thing,” Basurin was quoted as saying.

In Berlin, German Chancellor Angela Merkel appealed for the cease-fire to be respected.

“The situation is fragile,” Merkel conceded. “(But) that was certainly to be expected with a view to Debaltseve.”

German Foreign Ministry spokeswoman Sawsan Chebli mentioned the possibility of a meeting between the German, French, Russian and Ukrainian foreign ministers this week to discuss “further steps” to implement the cease-fire deal.

President Vladimir Putin’s aide Yuri Ushakov told Russian news agencies that the cease-fire is “changing the situation dramatically” and that Moscow looks forward to the heavy weaponry being pulled out from the front line.

The Russian Foreign Ministry reacted angrily to the decision, calling it “clumsy” in the context of last week’s cease-fire deal. The ministry dismissed the new EU sanctions as “running against common sense” and harming chances “to resolve an internal Ukrainian conflict.”