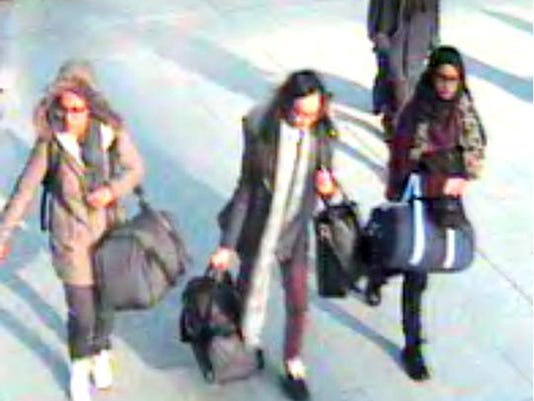 This is a still taken from CCTV issued by the Metropolitan Police in London on Feb. 23, 2015, of 15-year-old Amira Abase, left, Kadiza Sultana,16, and Shamima Begum, 15, going through Gatwick airport, south of London, before they caught their flight to Turkey on Feb 17, 2015. The three teenage girls left the country in a suspected bid to travel to Syria to join the Islamic State extremist group.(Photo: Metropolitan Police / AP)

London — Police investigating the disappearance of three British teenage girls say they believe they are no longer in Turkey and have crossed into Syria.

Authorities believe the girls could be on their way to join the Islamic State group.

The girls, aged 15 to 16, disappeared from their London homes on Feb. 17 and boarded a flight to Istanbul in Turkey.

The case underlines fears that growing numbers of young women in Britain and Europe are lured by online propaganda to join the Islamic State group and become “jihadi brides.”