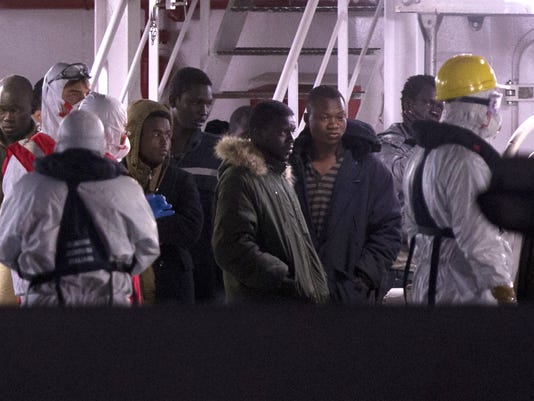 Survivors of the boat that overturned off the coasts of Libya Saturday, wait to disembark from Italian Coast Guard ship Bruno Gregoretti, at Catania Harbor, Italy, April 20, 2015. A smuggler's boat crammed with hundreds of people overturned off Libya's coast as rescuers approached, causing what could be the Mediterranean's deadliest known migrant tragedy and intensifying pressure on the European Union Sunday to finally meet demands for decisive action.(Photo: Alessandra Tarantino / AP)

Catania, Sicily — Italian prosecutors on Tuesday began building their case against the traffickers responsible for the drowning of as many as 950 migrants in the Mediterranean, as European Union leaders mulled a new plan to undermine smugglers' finances and their most precious assets — their vessels.

Overnight Tuesday, prosecutors boarded the rescue ship that brought the 27 survivors of the weekend disaster to Sicily and arrested the Tunisian captain and a Syrian crew member of the smuggler ship that capsized. They are accused of favoring illegal immigration and the captain was also accused of reckless homicide and causing a shipwreck.

Catania prosecutors said the capsizing was due to two factors: The smuggler captain, Mohammed Ali Malek, 27, by mistake rammed his boat into the Portuguese-flagged cargo ship that had come to its rescue. In addition, the migrants themselves then moved around on the overcrowded boat, which was already unbalanced from the collision, making it capsize.

The survivors were brought Tuesday to a migrant holding center in Catania and were "very tired, very shocked, silent," according to Flavio Di Giacomo of the International Organization for Migration.

On Tuesday, Catania prosecutor Giovanni Salvi's office stressed that none of the crew aboard the Portuguese-flagged King Jacob is under investigation in the disaster, that the crew members did their job in coming to the rescue of a ship in distress and that their activities "in no way contributed to the deadly event."

The coast guard, meanwhile, reported that it saved some 638 migrants in six different rescue operations on Monday alone. On Tuesday, a further 446 people were rescued from a leaking migrant ship about 80 miles south of the Calabrian coast.

The weekend deaths have jolted the European Union into taking action, with Italy demanding that it not be left alone to shoulder the burden of rescues and that the EU focus on preventing the boats from leaving Libya in the first place.

Ahead of an emergency EU summit Thursday, EU foreign and interior ministers approved a 10-point plan at a meeting in Luxembourg that calls for the beefing-up and expansion of the current EU border patrol mission, and embarking on a "systematic effort to capture and destroy" smuggler boats.

The smugglers use a variety of boats for their crossings, from rubber Zodiac-type boats to wooden fishing vessels and even old cargo ships. They are always overcrowded to maximize the revenue of the smugglers, who charge between 1,000 and 1,500 euros (dollars) for the crossing from Libya, where most trafficking operations originate.

The EU plan calls for closer law-enforcement coordination to trace smugglers' revenue sources, which prosecutors have said often evade traditional bank transfers in favor of informal Arab hawala networks, in which migrants' relatives in Europe pay local brokers for each leg of the journey.

Italy had launched a robust and expensive search-and-rescue mission in 2013 after some 366 migrants drowned off the island of Lampedusa. The politically unpopular Mare Nostrum operation ended last year, and the EU's Frontex border patrol mission took charge. But its limited mandate and resources have prevented it from being effective in saving lives.

The EU plan also calls for member states to ensure all migrants are fingerprinted. As it is, many migrants merely pass through Italy without being fingerprinted or applying for asylum here, preferring instead to pay smugglers to get them to northern Europe where they apply for asylum and have better job opportunities.