Police have arrested a man, accusing him of helping organize the March 18 attack on the Bardo museum that killed 22 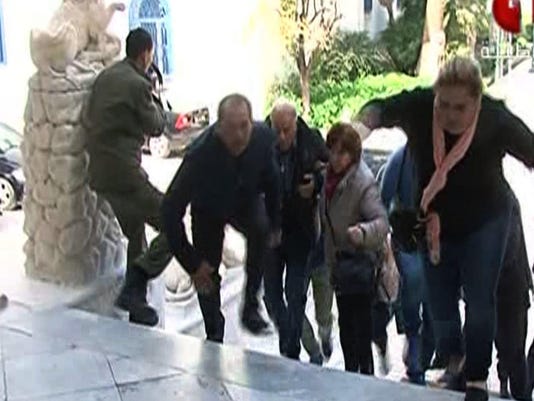 An image grab taken from the state-run Tunisia 1 channel on March 18, 2015 shows people escaping from Tunis' famed Bardo Museum during an attack by two men armed with assault rifles. Italian police on May 20 have arrested a Moroccan man on a Tunisian arrest warrant accusing him of helping organize and execute the attack that left 22 people dead.(Photo: Getty Images)

Abdelmajid Touil was arrested Tuesday night on a Tunisian arrest warrant at the home of his mother and two brothers in Gaggiano, near Milan, anti-terrorism investigator Bruno Megale told reporters.

The only trace that Italian authorities had of Touil prior to his arrest was that he had arrived in Italy on Feb. 17 along with migrants from a smuggler’s boat, police said. He was identified by authorities in Porto Empedocle, Sicily, and was subsequently issued an expulsion decree, Megale said.

Those decrees are usually given to migrants heading to Europe for economic reasons — not refugees from conflict who could apply for asylum. It’s not clear when or if he left Italy or how he might have returned.

Italian police, however, believe he went to back to Tunisia to help organize the March 18 attack in Tunis.

Anti-immigrant politicians have warned that Islamic extremists might enter Italy via any one of the dozens of migrant boats setting off weekly from Libya for European shores. Confirmation that Abdelmajid had made at least one trip to Italy by boat has fueled criticism of the massive, Italy-led Mediterranean operation to rescue would-be refugees crossing the Mediterranean.

The accusations in the Tunisian arrest warrant against Touil include premeditated murder, conspiracy to commit attacks against the state, belonging to a terrorist group and recruiting and training others to commit terrorist attacks, Megale said.

“He was wanted internationally for co-participation in, planning and executing the March 18 attack on the Bardo Museum in Tunis,” Megale said.

The Islamic State group claimed responsibility for attacking the Bardo, Tunisia’s leading historical museum, which has a trove of Roman mosaics. Gunmen opened fire on tourists getting out of buses and then entered the museum and fired on more tourists inside. Two gunmen were killed in a shootout with police.

A number of people have been arrested in connection with the Bardo attack, but the Tunisian interior ministry has said the mastermind of the attack is still at large.

Tunisian authorities do not think Abdelmajid is that mastermind. But the spokesman for Tunisia’s interior ministry, Mohammed Ali Aroui, confirmed that Abdelmajid was the subject of an international arrest warrant for his involvement in the attack.

“He participated indirectly in the attack, supporting the ones who carried it out,” he told The Associated Press, adding that authorities were now working on Abdelmajid’s extradition to Tunisia.

Two Moroccans were involved in the Bardo attack as well as two Algerians, added Aroui, although the killing was only carried out by the two Tunisian shooters.

Some 20 people have been arrested in connection with the Bardo attack. Ten days after it took place, security forces in southern Tunisia killed nine militants led by an Algerian that the government has also linked to the attack.

Italian police said they were able to identify Touil in part after his mother reported that her son’s passport was missing immediately after the Bardo attack.