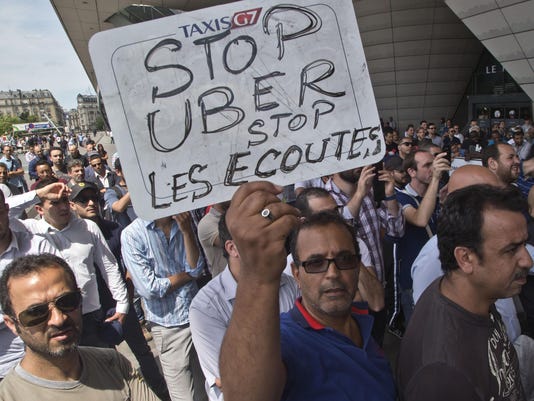 French taxis are on strike around the country, snarling traffic in major cities and slowing access to Paris' Charles de Gaulle airport after weeks of rising and sometimes violent tensions over Uber. The spokeswoman for the Paris prosecutor says two Uber managers have been taken into custody for questioning over “illicit activity” linked to the ride-hailing company’s low-cost service.(Photo: Michel Euler / AP)

The detentions came amid rising tensions between the government and the American company, which culminated last week in a violence-marred taxi strike that blocked roads around the country.

French authorities are frustrated that Uber doesn’t pay the same taxes and social charges as traditional taxis, whose drivers have lashed out against what they see as unfair competition. Uber, meanwhile, argues that the French system is outdated and needs reform to keep up with apps and geo-localization.

Uber said in a statement that its general managers for France and Western Europe were questioned Monday.

“We are happy to answer questions the authorities have about our service and look forward to resolving these issues,” it said.

The company assured passengers that it would ensure their safety, after last week’s violence.

The standoff reflects larger tensions in France over how to regulate fast-moving technology and stay globally competitive while ensuring labor protections.

San Francisco-based Uber Technologies Inc. has also run into legal problems elsewhere in Europe, as well as in China and India.