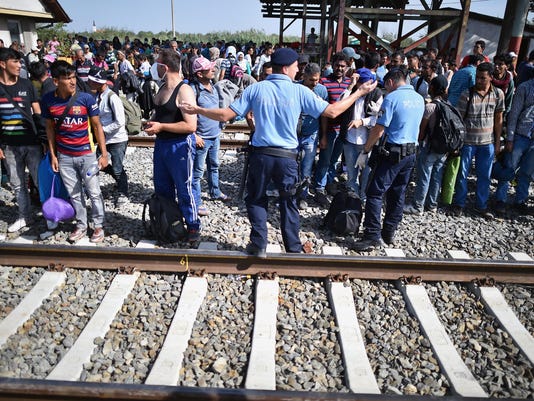 TOVARNIK, CROATIA - SEPTEMBER 17: Police line the railroad tracks as hundreds of migrants wait at Tovarnik station for a train to take them to Zagreb on September 17, 2015 in Tovarnik, Croatia. Migrants are crossing into Croatia from Serbia two days after Hungary sealed its border with Serbia, the majority of them want to reach Germany, amid divisions within the European Union over how to manage the ongoing crisis. (Photo by Jeff J Mitchell/Getty Images)(Photo: Jeff J Mitchell / Getty Images)

Zagreb, Croatia — Thousands of migrants were trapped Friday in a vicious tug-of-war as bickering European governments shut border crossings, blocked bridges and erected new barbed-wire fences in a bid to stem the wave of humanity fleeing conflict and poverty in the Middle East and Africa.

Asylum-seekers who fled westward after being beaten back by tear gas and water cannon on the Hungarian-Serbian border just days earlier found themselves being returned to Serbia, where their ordeal began, after Croatia declared it could not handle the influx.

The EU’s failure to find a unified response to the crisis left this tiny Balkan nation, one of the poorest in the European Union, squeezed between the blockades thrown up by Hungary and Slovenia and the unending flood of people flowing north from Syria, Iraq and Afghanistan.

With more than 17,089 migrants arriving in just three days, Croatian Prime Minister Zoran Milanovic declared that his nation of 4.2 million could no longer cope and the asylum-seekers could not stay.

“What else can we do?” Milanovic said at a news conference. “You are welcome in Croatia and you can pass through Croatia. But go on. Not because we don’t like you, but because this is not your final destination.”

“Croatia has shown it has a heart,” he said. “We also need to show we have a brain.”

Across eastern Europe, barriers to the migrants’ passage were thrown up as nations tried to shift the burden of handling the influx onto their neighbors, leaving asylum-seekers ever more desperate and confused.

Croatia declared itself overwhelmed and began busing migrants to Hungary and closing its border crossings with Serbia. Slovenia halted rail service to Croatia and was sending migrants back there, while Hungary began building yet another razor-wire border fence, this time on its border with Croatia.

Caught in the middle of this high-stakes game of hot potato were the masses of miserable men, women and children who have found their way to the wealthier European nations they wish to settle in blocked at every turn.

“We are seeing the result of haphazard policies,” said Maurizio Albahari, a social anthropologist at the University of Notre Dame and author of “Crimes of Peace: Mediterranean Migrations at the World’s Deadliest Border.”

“The situation is largely due to the lack of a coordinated approach toward the reception of these displaced persons.”

Most migrants don’t want to stay in Croatia — only one woman with children has requested asylum, the country’s foreign minister said. Instead, they are trying to reach Western European countries like Germany that have said they are welcome.

While Croatia is happy to let people pass through, Hungary and Slovenia say allowing the migrants to cross their borders would violate European Union rules.

Croatia is part of the EU but not a party to the Schengen treaty, which allows people to travel freely between 26 European countries without showing their passports. Slovenia and Hungary are treaty members and say they are protecting Europe’s borders.

Events in the Balkans have underscored the failures of the EU’s common asylum policy, which calls for a “joint approach to guarantee high standards of protection for refugees.”

Though the EU says “asylum must not be a lottery,” scenes from Croatia on Friday showed it isn’t working out that way.

“The emergency is being actively reproduced by the refusal to acknowledge the reality on the ground. Migrants and refugees have a goal in mind — to reach Germany, France, the Netherlands, Britain, Sweden and so forth,” Albahari said.

“Many have gone through political violence, exploitation by smugglers, and the peril of crossing the Mediterranean. Fences are not only proving futile: They are actively contributing to exasperation and to needless, additional suffering for families and vulnerable persons.”

The finger-pointing among leaders has become vicious. Croatia and Hungary bickered into the night, with Croatia saying the two countries had agreed to create a corridor for the migrants and the Hungarian Foreign Ministry calling that a “pure lie.”

“Hypocrisy rules in Europe today. No one is saying honestly how big a challenge this is,” Szijjarto told the MTI news agency. “This will not end soon.”

It is also causing tremendous strain on relations between neighbors in a region with a volatile past. Croatia, Serbia and Slovenia are all products of the break-up of Yugoslavia in the 1990s. Even before the latest crisis, many efforts to restore normalcy have been hard won.

In a sign of the discord, Hungarian authorities seized a Croatian train carrying 1,000 migrants as it crossed into Hungary, accusing its neighbor of failing to coordinate the transport. The train’s conductor was taken into custody and 40 Croatian police officers escorting it were disarmed, said homeland security adviser Gyorgy Bakondi.

Hungary denied assertions by Croatian officials that the transport had been coordinated by the two governments. “These people were coming toward the border without prior consultation, without respecting official channels,” government spokesman Zoltan Kovacs said.

The U.N. refugee agency warned the crisis was being worsened by the contradictory national policies.

“The crisis is growing and being pushed from one country to another,” said Adrian Edwards of UNHCR. “You aren’t going to solve these problems by closing borders.”

The human misery was evident in Croatian towns like Beli Manastir, near the border with Hungary. Migrants slept on streets, on train tracks and at a local gas station. People scrambled to board local buses without knowing where they were going.

Hundreds of others were stranded Friday on a large Danube River bridge in the Serbian town of Bezdan after Croatian authorities closed all but one border crossing. A large truck lifted barriers onto the bridge. The group, which included many women and children, stood in a no-man’s land in the middle in the scorching heat for hours with little water or food.

Finally Serbian authorities began busing them 120 kilometers (75 miles) to the south, near the Serbian town of Sid, so they could enter Croatia illegally through unguarded cornfields.

Elsewhere, 19 Croatian buses carried migrants across the border to Beremend, Hungary, where they were put on Hungarian buses for transportation to registration centers. Croatia also put some 800 on trains to Hungary.

UNHCR says more than 442,440 people have crossed the Mediterranean Sea to Europe this year and 2,921 have died trying. The International Organization for Migration puts those figures at 473,887 and 2,812.

The Vatican, meanwhile, took one Syrian refugee family in the tiny Roman Catholic city-state, as promised by Pope Francis. The family belongs to the Melkite Greek Catholic Church, an Eastern rite church, and is waiting on an asylum application decision from Italy.