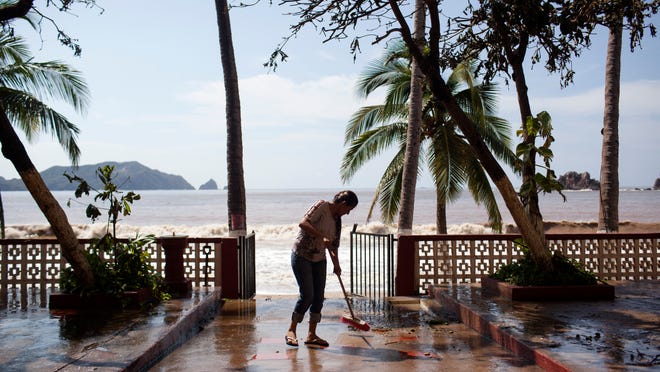 Although it had weakened some before hitting the coast, forecasters said it had potential to do “catastrophic” damage.

There were early reports of flooding and landslides, but no word on fatalities or major damage as the storm moved over inland mountains after nightfall. TV news reports from the coast showed some toppled trees and lampposts and inundated streets.

Patricia’s center made landfall in a relatively low-populated stretch of the Jalisco state coast near Cuixmala. The nearest significant city, Manzanillo, was about 55 miles southeast and outside the extent of the storm’s hurricane-force winds.

The U.S. National Hurricane Center in Miami said the storm that had 200 mph winds earlier in the day had weakened some, but remained a very dangerous Category 5 hurricane with maximum sustained winds of 165 mph at landfall.

Patricia’s projected path headed over a mountainous region dotted with isolated hamlets that are at risk for dangerous mudslides and flash floods, and where communications can be sketchy.

The storm was expected to rapidly weaken over the mountains and dissipate Saturday, but was still capable of soaking the region with heavy rain.

Residents and tourists hunkered down in shelters and homes across a coastal stretch dotted with sleepy fishing villages and gleaming resorts, including Manzanillo and the popular beach city of Puerto Vallarta.

In Puerto Vallarta, residents had reinforced homes with sandbags and shop windows with boards and tape, and hotels rolled up beachfront restaurants.

At a Red Cross shelter, some 90 people waited anxiously in the heavy, humid air, including senior citizens in wheelchairs and young children snuggled between their parents on mattresses on the floor.

Carla Torres and her family sought refuge there in the afternoon, fearful of what Patricia might do to her home just two blocks from a river in an area vulnerable to high winds.

“Here we are with those who can give us help,” Torres said.

Patricia formed suddenly Tuesday as a tropical storm and quickly strengthened to a hurricane. Within 30 hours it had zoomed to a record-beating Category 5 storm, catching many off guard with its rapid growth.

By Friday it was the most powerful hurricane on record in the Western Hemisphere, with a central pressure of 880 millibars and maximum sustained winds of 200 mph, according to the National Hurricane Center.

Patricia’s power while still out at sea was comparable to that of Typhoon Haiyan, which left more than 7,300 dead or missing in the Philippines two years ago, according to the U.N.’s World Meteorological Organization. More than 4 million people were displaced and over 1 million houses were destroyed or damaged in 44 provinces in the central Visayas region, a large cluster of islands.

Mexican officials declared a state of emergency in dozens of municipalities in Colima, Nayarit and Jalisco states, and schools were closed. Many residents bought supplies ahead of Patricia’s arrival. Authorities opened hundreds of shelters and announced plans to shut off electricity as a safety precaution.

One of the worst Pacific hurricanes to ever hit Mexico slammed into the same region, in Colima state, in October 1959, killing at least 1,500 people, according to Mexico’s National Center for Disaster Prevention.

Earlier in the day, Roberto Ramirez, director of Mexico’s National Water Commission, which includes the nation’s meteorological service, said Patricia’s winds could be powerful enough to lift automobiles, destroy homes not sturdily built with cement and steel, and drag anyone caught outside.

A steady rain fell in Puerto Vallarta in the evening, but there was no sign yet of the storm’s vicious winds. Streets were deserted except for police patrolling slowly with their emergency lights on. Civil protection officials warned that past hurricanes have filled the city’s streets with water, sand and flying projectiles.

Wendi Mozingo of Austin, Texas, and six family members sat on folding chairs in a shelter after being ordered out of their beachfront vacation rental home by managers of the property. They brought a few changes of clothes and left everything else behind.

The family was supposed to depart Puerto Vallarta on Tuesday, but now, Mozingo said, “We’re leaving as soon as we can.”

Brian Bournival of Portland, Oregon, who traveled to Puerto Vallarta for a friend’s 40th birthday, decided to ride the storm out in his hotel because of heavy traffic on roads out of the city.

Bournival expressed confidence in the construction of his hotel a few blocks from the ocean, describing its foundations as “ginormous.” He and a dozen other guests huddled in a common area with food, water and medical kits.

U.S. State Department spokesman Mark Toner said tens of thousands of American citizens are believed to be vacationing or living in areas likely to be affected by the storm.

Three airports in the storm’s path were shut: Puerto Vallarta; Manzanillo in Colima state; and Tepic in Nayarit.

Jose Manuel Gonzalez Ochoa was one of the residents who decided to get out of Puerto Vallarta, to a town about 30 minutes from the coast. His family lives in their ground-floor chicken restaurant, Pollos Vallarta, and neighbors told them water was 5 feet deep in the street the last time a hurricane came through.

“The whole government is telling us to leave,” he said. “You have to obey.”

Asked what preparations he would make for his business, Gonzalez Ochoa said he planned to just close up and see what was left after the storm passed.

Patricia also threatens Texas with forecasters saying that even after the storm breaks, up its tropical moisture will likely feed heavy rains already soaking the state.

The U.S. National Weather Service said a flash flood watch would be in effect through Sunday morning for Dallas-Fort Worth, Austin and San Antonio.

A coastal flood warning was in effect through Friday night in Corpus Christi. Galveston was under a coastal flood advisory until Saturday night.

Emergency management officials in Texas contending with multiple storm systems are preparing for heavy rains to continue through the weekend and widespread flooding that may follow.

Rain fell steadily Friday through much of the state and is forecast to continue through at least Saturday as a storm system slowly moves eastward. Many parts of Texas, including Dallas and Houston, could see upward of 12 inches of rain by early Saturday.