Research, published last year, found that lions no longer exist in 99 percent of their historic range in West Africa 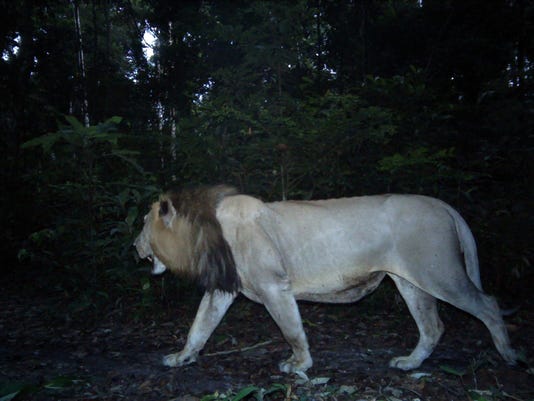 This Feb. 24, 2015, photo released by Philipp Henschel shows a lion in the Bateke Plateau National Park in Gabon, a country where lions have not been sighted since 1995. New research published Monday, Oct. 26, 2015, shows sharp declines since 1990 in nearly all lion populations in West and Central Africa, and that both regions risk losing half their lions within the next two decades.(Photo: Philipp Henschel/Panthera / AP)

Lagos, Nigeria — Lions, that symbol of Africa’s wild beauty, power and freedom, no longer roam in Mali. Or in Ivory Coast or Ghana or war-shattered eastern Congo. Or most of the rest of West Africa.

Three years of searching and no sight of a lion for Philipp Henschel, lion survey coordinator for the New York-based Panthera conservation group.

Then he saw it, his first lion in West Africa. And in of all places, Nigeria.

“It came as a big surprise because Nigeria has by far the biggest human population on the continent, and the national parks are fairly small compared to others in West Africa that already have lost their lions,” Henschel told The Associated Press.

“Everyone was excited, including rangers from Nigeria’s National Park Service — it was the first time they had seen one, too.”

That was in 2009. The count was depressing: 25 to 30 lions left in Kainji Lake National Park in west-central Nigeria and only about five in the east-central Yankari National Park. Three years earlier, Nigerian conservationists had reported lions present in six protected areas, but they had apparently disappeared in four of them, Henschel said.

Henschel has gone on to survey all 21 protected areas believed to harbor lions in West Africa. He has seen only nine lions in four reserves, including Senegal’s Niokolo-Koba National Park and the trans-frontier Pendjari and Arli National Parks of Benin and Burkina Faso.

His research, published last year, reported that lions no longer exist in 99 percent of their historic range in West Africa — a finding that prompted the International Union for Conservation of Nature to put the lions of West Africa on its Red List as critically endangered.

The situation is dire in much of Africa.

New research published Monday shows sharp declines since 1990 in nearly all lion populations in West and Central Africa, and that both regions risk losing half their lions within the next two decades. East Africa stands a 37 percent chance of halving its lion population over the same period, according to the survey published in the Proceedings of the U.S. National Academy of Sciences and written by researchers including Henschel.

Lion populations are increasing in only four southern African nations: Botswana, Namibia, South Africa and Zimbabwe, where most lions are in fenced reserves, the survey found.

With the international spotlight on lion conservation intensified by outrage over the killing this year of Cecil the lion in Zimbabwe by an American hunter, Henschel’s Panthera group hopes to attract funding from conservation agencies and Nigerian philanthropists to make sure lions do not disappear here.

Panthera and the Oxford University-based WildCRU are hosting a Cecil Summit in February in Oxford to draw attention to the threat to lions like Cecil, who conservationists say was lured out of a protected area in Zimbabwe’s Hwange National Park before being wounded with a bow and arrow and then tracked down and killed.

Lions roamed much of the world, from Africa, across Europe and Asia, and even North America until about 11,000 years ago, Henschel said.

Today, they exist only in India and Africa. In India, about 500 lions remain, all in Gujarat state, according to state officials. Fewer than 20,000 lions roam the wilds in all of Africa, according to an estimate from the International Union for Conservation of Nature.

In West Africa, only 400 lions remain, according to Henschel’s research, making them likely the most endangered lions on the planet.

In the competition for land and food between lions and humans, the king of the jungle is losing. The decline is due to growing populations of peasant farmers encroaching on their traditional ranges, poachers feeding a growing appetite for bush meat, like antelopes, that are lions’ sole food source, and global warming fueling a deadly conflict for grazing land between nomadic herders and farmers, leaving even less space for lions.

The trophy hunting that killed Cecil is legal in only two West African countries, Burkina Faso and Benin, but the number of kills that once caused local declines has diminished since the European Union banned imports of lion trophies from both countries over the past year.

Before that, the EU used to be the largest importer of lion kills from the region, Henschel said, adding that the U.S. is considering listing the West African lion as endangered under its Endangered Species Act, which would prevent trophy imports by American hunters.

With their short manes or none at all, West African lions look more like Asian lions than their southern and east African cousins. They are celebrated in Nigeria as a national symbol of pride in paintings on buses, the logo of the National Park Service and even a cement label, but they have proved easy to kill. When lions stray from protected areas and kill cattle, herdsmen will sometimes poison the cow’s carcass to kill the lion, Henschel said.

The 40-year-old Henschel has lived nearly half his life in Gabon, nurturing a dream to re-establish a lion population in that West African nation after their two-decade-long absence.

Suddenly, it could become a reality. In January, a researcher studying chimpanzees accidentally filmed a lion. Primate researcher Ivonne Kienast of the Max Planck Institute of Evolutionary Anthropology caught the image in Gabon’s Bateke Plateau National Park, where lions have not been sighted since 1995. It probably strayed across the border from Congo, Henschel thinks.

Researchers were amazed. But the lion, a magnificent specimen at just the right age for breeding at about 4½ years old, remains in solitary residence 10 months later. He’s been nicknamed Ali, after Gabon’s President Ali Bongo, who Henschel says is a big cat lover. Now Panthera, the German-based Max Planck Institute and Gabonese wildlife officials are searching for two females to create a self-sustaining lion population in the park.

Elsewhere in West Africa, the prospects are bleak.

“We have to confront that reality,” said Panthera president Luke Hunter. “Lions and people both evolved in Africa and co-existed for millennia, but today, one is losing the race for survival.”