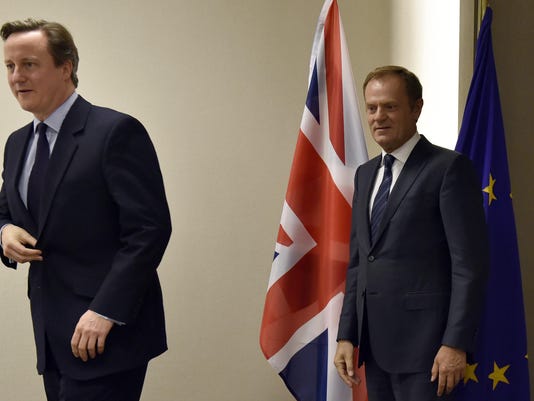 European Council President Donald Tusk, right, looks toward British Prime Minister David Cameron prior to a meeting on the sidelines of an EU-Turkey summit at the EU Council building in Brussels on Sunday, Nov. 29, 2015.(Photo: Eric Vidal / AP)

Brussels — European Union leaders and the Turkish prime minister sealed a joint summit with a commitment to re-energize Turkey’s long-stalled membership talks and bolster their common resolve to deal with the Syrian refugee crisis.

The 28 EU leaders were leaning hard on Prime Minister Ahmet Davutoglu to stem the flow of migrants seeking a better future in Europe’s heartland and European Council President Donald Tusk said the latest estimate showed that “approximately 1.5 million people” had illegally entered the bloc this year, a lot coming through Turkey.

It left the EU in need of help from Ankara, even if their recent relations have been sown with discord. On Sunday, it was hugs all around as Tusk and Davutoglu completed what they called a breakthrough summit to put relations on an even keel again.

“Turkish membership will be an asset,” said Davutoglu after “no disagreements emerged” during the hastily-called emergency meeting.

Both sides got concessions: The EU desperately needs Turkish help to contain the flow of migrants into the bloc, and Turkey resuscitated long-mothballed hopes to join a bloc in which it would, by population, become the biggest single member.

The refugee crisis has reminded European leaders just how much Turkey — whether a bloc member or not — is a pivotal partner for the EU and a buffer state from the bedlam rocking much of the Middle East in recent years.

French President Francois Hollande said Sunday that the EU will need to monitor Turkey’s commitments “step-by-step,” deal with the migrant crisis, fight extremism and help end Syria’s political crisis. He said any funds for a 3 billion-euro ($3.2 billion) package to help Turkey deal with the migrants on its territory will be released progressively as the commitments are checked.

Davutoglu said that money wasn’t earmarked for Turkey per se but for the refugees on Turkish soil. Yet the hundreds of thousands of migrants coming into the EU this year have caused the worst refugee crisis in Europe since World War II, and EU nations have been at pains to draw Turkey in as part of the solution. As a sweetener it is again discussing issues that were long off the table.

“I wish to say the number of migrants will decline, but we cannot say this because we don’t know what’s going on in Syria,” he said.

As part of the carrot approach, the EU promises to make haste with talks on easing visa restrictions and fast-tracking Turkey’s EU membership.

“I want there to be an agreement so that Turkey takes on commitments. Europe supports it, and the refugees can be welcomed,” Hollande said.

Davutoglu said he was “thankful to all European leaders for this new beginning, which is not just a beginning of a meeting but the beginning of a new process, which is very important for the future of our common bond in Europe.”

The International Organization for Migration said almost 900,000 people fleeing conflict and poverty in the Middle East, Africa and Asia have entered Europe this year seeking sanctuary or jobs, a figure much lower than Tusk’s assessment. More than 600,000 have entered through Greece, many after making the short sea crossing from Turkey, the IOM said.

More than 2 million refugees from Syria also live in Turkey, but according to Amnesty International, only around one in 10 are being helped by the government. The rest fend largely for themselves.

Even if support for closer relations with Turkey has often been lukewarm at best in many of the EU member states, the refugee crisis has forced a drastic revision of relations with Ankara.

Others though pointed out that any aid had to be offset by Turkish commitments on reform and respect for human rights.

Tusk put it straight to Davutoglu during the opening session of the summit. In return for EU aid, he said, “we expect to see an immediate and substantial reduction of irregular migrants arriving to Europe.” Furthermore, he added, the EU nations want Turkey “to realize the common objective of coming closer together through reforms, the upholding of the highest standards of human rights and media freedom and the implementation of agreed roadmaps and benchmarks” that are part of the EU membership talks.

Belgian Prime Minister Charles Michel said Turkey couldn’t be given a “blank check” from the EU to help it handle the roughly 2 million Syrian refugees in the country and added his nation is not ready yet to free up money. And even if Turkey has long sought to join the bloc, Michel said Turkey is “far away from membership” and “there is much progress that needs to be made.”

In a recent membership progress report on Turkey, the EU criticized Ankara’s interference with its justice system and Turkish government pressure on the media. Last week, two more opposition journalists were jailed in Turkey.

EU foreign policy chief Federica Mogherini said that there was enough to bind both sides together.

“Turkey and Europe need each other. We are facing the same problems — from the war in Syria to terrorism to the stability or instability for the region . we can be partners. We have to put all the issues we have on the table.”