The U.S. Centers for Disease Control and Prevention says evidence of a link between Zika and microcephaly is strong 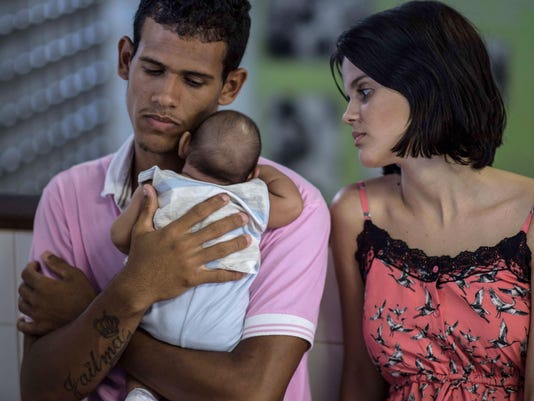 Regina de Lima and Tainara Lourenco became pregnant at a scary moment — the dawn of an extraordinary Zika outbreak, as authorities came to suspect that the virus was causing an alarming spike in a rare birth defect called microcephaly. Both have reason to fear for the health of their unborn offspring.

But that is where the similarities end.

Lima is well-off, and took advantage of the options of affluence.

Lourenco lives in a slum. She has no options, except to hope for the best.

With more than 3,700 confirmed or suspected cases of microcephaly registered here since October — compared with fewer than 150 cases in all of 2014 — the Brazilian government took the drastic step of urging would-be parents to put off pregnancies.

But for Lima, an audiovisual producer from Rio de Janeiro, it was too late. She was already pregnant, and her first trimester — thought to be when the fetus is most susceptible to Zika — would coincide with Rio’s summer mosquito season.

“The first weeks were terrifying,” said Lima. “I cried and cried.”

So Lima did what growing numbers of wealthy Brazilian women are doing: She requested an extended vacation from work, packed her bags and left for Europe. She plans to stay at least through the end of the dicey first trimester.

“I am lucky to have options, to be able to make decisions,” Lima said. “Most women in my situation don’t have that luxury. They’re completely at the mercy of fate.”

Unemployed and five months pregnant, 21-year-old Lourenco lives in a slum at the epicenter of Brazil’s tandem Zika and microcephaly outbreaks, the state of Pernambuco in Brazil’s impoverished and underdeveloped northeast.

“I think I got Zika or some other disease not long ago,” she said. “What can we do? Just hope that it doesn’t affect the baby.”

The only precautionary measure Lourenco could possibly take, long-sleeve clothing, is unworkable in the unrelenting equatorial heat.

Like many of the estimated 400,000 women currently pregnant in Brazil, she can’t afford mosquito repellent.

Microcephaly fears have sparked a run on repellents, emptying out the stock in many pharmacies in hard-hit areas; where it’s still available — often fishing supply stores — it now often costs several times the normal price.

In the Central American nation of El Salvador, where authorities have urged women to put off pregnancy for two years, Guadalupe Urquilla is struggling to take fate into her own hands.

She’s traded her dresses for long pants and closed shoes, scrubs out the family’s concrete water tank every three days, and writes San Salvador city officials, demanding that they fumigate the debris-strewn public housing complex where she lives with her husband and 2-year-old daughter.

“We’re really scared,” said Urquilla, who’s in her 13th week of pregnancy. “Imagine my baby does not get Zika, but imagine how stressed out it will be when it comes out. The whole pregnancy we’re stressed out about mosquitoes. … It’s a huge paranoia.”

“If you have to get sick you will get sick,” she said. “It’s everywhere.”