Ex-Toronto Mayor Rob Ford in hospital as he battles cancer

Ex-Toronto Mayor Rob Ford in hospital as he battles cancer 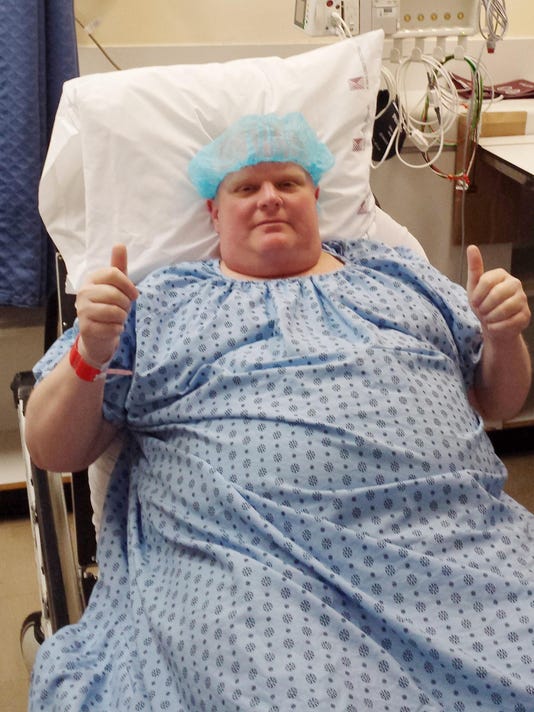 In this May 11, 2015 photo provided by Dan Jacobs, former Toronto Mayor Rob Ford gives a thumbs up before surgery in Toronto, to remove a cancerous tumor from his abdomen. On March 17, 2016, Ford's chief of staff, Jacobs, said doctors are working on building his strength to be able to resume chemotherapy.(Photo: AP)

Toronto — Former Toronto Mayor Rob Ford is in hospital with his family at his side as he continues his cancer treatment.

Ford’s Chief of Staff Dan Jacobs said Thursday doctors are determining next steps, and working on building his strength to be able to resume chemotherapy. Jacobs said Ford has had about 10 rounds of chemotherapy thus far. The Ford family has asked for privacy.

Ford gained international notoriety in 2013 when, after months of denials, he acknowledged he had smoked crack cocaine in one of his “drunken stupors,” but then refused to resign.

He was diagnosed with pleomorphic liposarcoma in 2014.

Following an aggressive round of treatment, Ford underwent surgery to remove the tumor last May. In October, doctors discovered two cancerous growths on his bladder. He has been in the hospital since late February.

Ford was forced out of his mayoral re-election bid in 2014 when doctors discovered his rare cancer. He ran successfully for council instead.