After worst smog in 11 years, Mexico City braces for more

After worst smog in 11 years, Mexico City braces for more 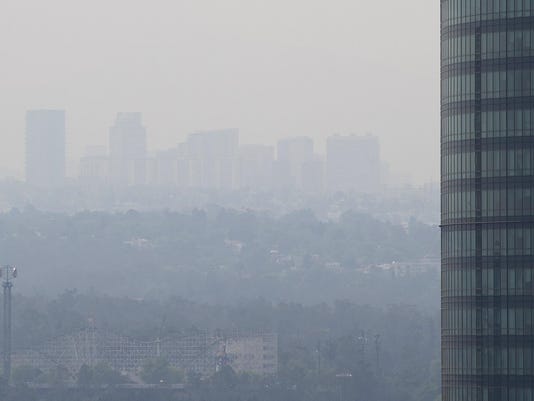 Buildings obscured by a thick haze are seen past a skyscraper in Mexico City, March 16, 2016. Authorities banned more than 1 million cars from the roads and offered free subway and bus rides to coax people from their vehicles as Mexico City's first air pollution alert in 11 years stretched into a third day Wednesday.(Photo: Rebecca Blackwell / AP)

Mexico City — Choking smog returned to the skies of Mexico City this week at levels not seen in more than a decade, prompting fears of more eye-watering days to come as efforts to curb pollution run afoul of the courts and the realities of life.

The haze that shrouded the second-largest city in the Western Hemisphere for four days never reached the worst periods in the 1980s and 1990s, but ultimately resulted from the fact that there are still too many cars on the crowded streets.

“You have to recognize that we are doing better, but it’s still not ideal,” Javier Riojas, a specialist in environmental sustainability at the Universidad Iberoamericana, said Friday.

Authorities declared the city’s first Phase 1 pollution alert since 2005 on Monday due to high ozone levels blamed on a thermal inversion, which traps airborne contaminants from releasing upward into the atmosphere. Mexico City typically sees its worst air smog during the winter-spring dry season when warm, still air settles in the high-altitude basin ringed by volcanic mountains.

At one point on Monday, the pollution index edged past 200 — double the level considered acceptable but far short of the record of 398 set in March 1992.

Since the 1990s, Mexico City has become a vastly different place. Factories have been cleaned up or moved away, leaded gasoline was banned and tough emissions standards have been imposed on cars.

Despite much grumbling the government imposed a rule that forced cars more than eight years old to stay parked for at least six days each month even if they passed smog checks.

But the Supreme Court last year overturned that rule, putting an estimated additional 1.4 million vehicles back on the streets, many of them older, more-polluting models. As traffic jams increased, overall emissions were boosted even more because cars were forced to idle, experts say.

This week’s emergency prompted authorities to say they are studying more stringent restrictions on vehicles — including smoke-belching government trucks that are now exempt from smog tests — though there are likely to be more smog-bound days before those have any effect.

Bernardo Baranda, Latin America director for the Institute for Transportation and Development Policy, said that officials ought to re-establish limits on car circulation and improve cooperation across the various jurisdictions that make up the Valley of Mexico.

Longer-term, he called for more investment in public transportation as well as tolls on cars and creation of areas open only to foot and bicycle traffic.

“The root problem is the growth of the vehicle fleet,” Baranda said.

Air quality in Mexico City today is generally far better than much of China, India and other parts of Asia. For example, while the alert was still in place on Thursday, Mexico City recorded a pollution index of about 150 while levels were topping 400 in Beijing, according to the World Air Quality Index, which tracks air quality around the globe.

Even with the Supreme Court ruling, vehicles still must pass smog checks every six months. But every car owner knows that slipping the equivalent of about $20 to a verification center worker is enough to ensure the inspection will come out “clean.”

Authorities in Mexico City say vehicles are responsible for 87 percent of nitrogen oxide emissions, a precursor to ozone, the most problematic contaminant.

Critics also say a series of city administrations have been enthusiastic about building things like double-decker highways for cars and less aggressive about better public transportation, though the area has expanded its subway, bus and urban train systems. A bike-share program has been wildly popular and dedicated bus lanes have attracted huge ridership since their inception in 2005.

Dwight Dyer, energy and environment editor for the online publication El Daily Post, argued that at least four more dedicated bus lanes could have been built for the amount of money that was spent expanding a highway that rings the city.

“You have a policy of promoting the use of the car, and this has not been only the present administration,” Dyer said, adding that the tendency is even more pronounced in suburbs that are home to over half the metropolis’ 20 million-plus residents.

“There’s a huge market for increasing mass public transit,” Dyer said. “But there’s very little interest I suppose in doing this because the electoral payoffs are not as high.”

“I have thought that they should take half of the cars off the road on any given day, and the other half the next,” said Ricardo Juarez, a 54-year-old salesman who relies on the subway, buses and occasional taxis to get around.

This week’s alert may be a good thing, he said, if it “sends up red flags for the government.”