Up to 500 feared dead in Mediterranean shipwreck last week

The disaster happened in waters between Italy and Libya, based on accounts from 41 survivors who were rescued

Up to 500 feared dead in Mediterranean shipwreck last week 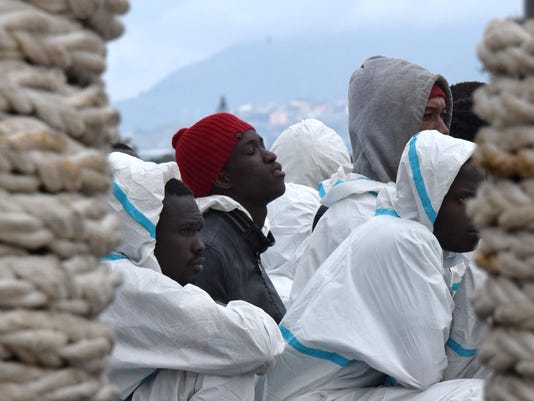 This file photo taken on February 1, 2016 shows men waiting to disembark from the Italian Coast Guard vessel "Dattilo" in the port of Messina, Sicily, following a rescue operation of migrants and refugees at sea. Migrants rescued from a small boat in the Mediterranean told the UN refugee agency they had witnessed a shipwreck that claimed 500 lives, a UNHCR spokeswoman said on April 20, 2016.(Photo: Giovanni Isolino / Getty Images)

Geneva — Up to 500 people are feared dead after a shipwreck in the Mediterranean Sea last week, the U.N. refugee agency said Wednesday, citing the accounts of survivors.

The disaster happened in waters between Italy and Libya, based on accounts from 41 survivors who were rescued on April 16 by a merchant ship, UNHCR said. The agency said that if confirmed, it would be one of the deadliest tragedies on the Mediterranean in the last year.

The survivors said they had been among 100 to 200 people who left a town near Tobruk, Libya, on a smugglers’ boat last week. The agency said Wednesday that “after sailing for several hours, the smugglers in charge of the boat attempted to transfer the passengers to a larger ship carrying hundreds of people in terribly overcrowded conditions.”

“At one point during the transfer, the larger boat capsized and sank,” UNHCR said in a statement, saying that its staff had visited the survivors at a local stadium in Kalamata, Greece, where they have been housed by authorities while they undergo “police procedures.”

Barbara Molinario, a Rome-based spokeswoman for UNHCR, said details remained unclear and said its staffers didn’t want to press the survivors too hard “as they are still very tried by their experience.”

The statements offered the most official comment yet following repeated news reports about the incident in recent days.

Somalia’s president, prime minister and parliamentary speaker on Monday issued a joint statement over an unconfirmed report about the incident. Reports of the drownings circulated among families and on social media, but they hadn’t been confirmed by coast guard authorities in Italy, Greece, Libya or Egypt.

More than 1 million migrants and refugees crossed the Mediterranean last year — mostly refugees from war in Afghanistan, Iraq and Syria fleeing to Greece, and the European Union, via Turkey. However, the longer Libya-Italy route has traditionally seen more deaths.

Facing internal divisions, the EU has struggled to cope with the influx, and UNHCR on Wednesday reiterated its longstanding call for more “regular pathways” to Europe such as with resettlement and humanitarian admission programs, family reunification, private sponsorship and student and work visas.

Rights groups have repeatedly slammed a new Turkey-EU deal to curtail the flood of refugees into Europe, raising questions about the safety of Syrian refugees on both sides of the Turkish border.

Last week, the rights group said Turkish border guards had shot at Syrians escaping an Islamic State offensive. Turkey, home to 2.7 million Syrian refugees, rejects the claim and says it has an open-door policy toward migrants, but new arrivals are rare.

The rights group says tens of thousands of civilians are trapped along Turkey’s border.