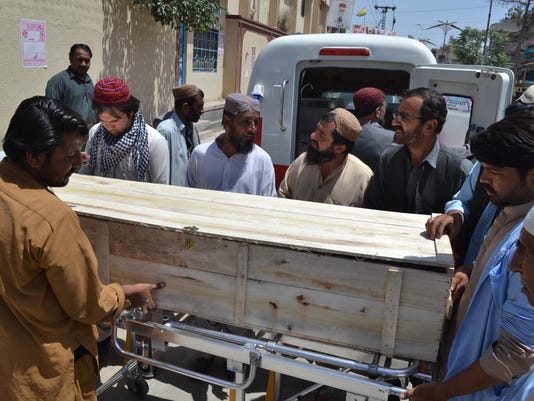 People stand near a coffin carrying a body one of the victims in a reportedly U.S. drone strike in the Ahmad Wal area in Baluchistan province of Pakistan, at a local hospital in Quetta, Pakistan, May 22, 2016. Mullah Mohammad Ghous, a foreign minister during the Taliban’s 1996-2001 rule of Afghanistan, says Mullah Akhtar Mansour’s death clears the way for those who left after he became leader to return to the insurgency.(Photo: Arshad Butt / AP)

Kabul, Afghanistan — The death of the leader of the Afghan Taliban in a U.S. drone strike last week could make the insurgent movement stronger by bringing back dissident commanders and unifying the movement’s ranks, a senior Afghan Taliban figure said on Tuesday.

Mullah Mohammad Ghous, a foreign minister during the Taliban’s 1996-2001 rule of Afghanistan, told The Associated Press that Mullah Akhtar Mansour’s death cleared the way for those who left after he became leader to return to the insurgency.

Mansour was killed on Saturday in the strike in southwestern Pakistan, just over the border from Afghanistan.

His death has been confirmed by some senior Taliban members, as well as Washington and Kabul. The Taliban has yet to formally announce his death.

Mansour had led the Taliban since last summer, when the death of founder Mullah Mohammad Omar became public. Mansour ran the movement in Mullah Omar’s name for more than two years. The revelation of Mullah Omar’s death and Mansour’s deception led to widespread mistrust, with some senior leaders leaving to set up their own factions.

Some of these rivals fought Mansour’s men for land, mostly in the opium poppy-growing southern Taliban heartland.

Ghous said a faction loyal to the leader of a major breakaway faction, Mullah Mohammad Rasool — who is believed to be detained in Pakistan — could rejoin the main branch “bringing greater strength.”

“Once the death of Mullah Akhtar Mansour is confirmed, Mullah Rasool’s group will have no excuse,” he said.

Mansour is widely said to have been a major player in Afghanistan’s multi-billion-dollar drug production and smuggling business, which along with other contraband helps fund the insurgency.

Western diplomats in Kabul have said that Mansour had been in contact with Iran and Russia in recent months, in a bid to diversify his support base away from Pakistan. Pakistan’s ISI secret service has long been suspected of supporting the Taliban leadership in cities over the border from Afghanistan, notably Quetta and Peshawar.

Russia and Iran are believed to have reached out to Taliban groups in recent months as a counterweight to the Islamic State group’s presence in Afghanistan. Mansour is believed to have been returning from Iran when he was targeted by the U.S. drone.

“The Taliban needs financial and strategic support, so as leader of the movement Mullah Akhtar Mansour had to look for it in difference places — and that meant he had to travel to different countries,” Ghous said, adding that Mansour regularly visited Dubai, Qatar and other countries including Iran, which borders western Afghanistan.

Ghous said that it was widely accepted within the upper ranks of the Taliban that Iran also facilitated contact with Russia for Mansour. “We all know Iran and Russia are linked nowadays, so if Mullah Akhtar Mansour is meeting with Iran it must be with the knowledge of Russia.”

Another respected veteran in the insurgency, religious scholar Mullah Hameedullah, agreed that Mansour’s death removed an obstacle to unity.

As senior figures gather in Pakistan to discuss the movement’s future and who should be leader, both Ghous and Hameedullah said the choice of successor would impact whether or not the Taliban chooses war or peace.