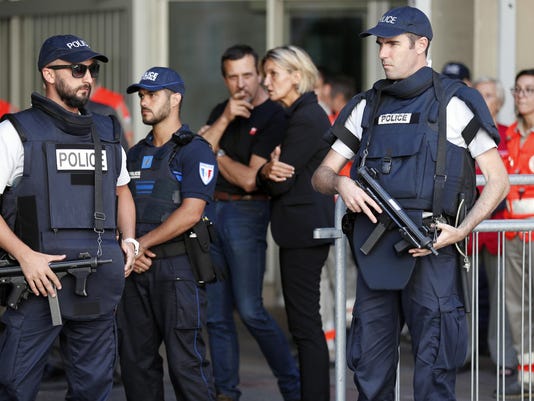 French Police stand in front of a funeral chapel to welcome families of victims on Sunday, three days after a truck mowed through revelersin Nice.(Photo: Francois Mori / AP)

The image of a religious extremist is at odds with the portrait that neighbors and family members initially painted of a man who ignored even the most basic rules of Islam, eating pork, drinking alcohol and shunning the mosque.

Many of those who knew him said in the days after Thursday’s Bastille Day attack that Bouhlel was a difficult person, describing him variously as aloof and hostile, even violent at times. In March, he received a suspended sentence for a road-rage incident — not enough to put him on the radar of France’s security services.

But officials said Sunday that the 31-year-old had apparently undergone a rapid conversion to radical Islam and carefully planned the attack that claimed the lives of at least 84 people, including 10 children, raising the question: How did a delivery driver go from petty crime to carrying out an act of mass slaughter in the space of a few months?

Most of those taken in for questioning, including Bouhlel’s estranged wife, who has since been released, described him as violent and unstable. While they all said he had long been indifferent to religion, some described a recent and very rapid conversion to radical Islam, the official said, noting that the attack appeared clearly premeditated.

Experts say that Bouhlel would have moved in an environment where he would have been exposed to the extremist ideology preached by the Islamic State group and others.

According to Yasmina Touaibia, a political scientist at the University of Nice, the region is home to more than a dozen informal mosques known to spread radical and fundamentalist ideas.

A lawyer for one of those detained by police said his client hadn’t recognized any signs of radicalism in Bouhlel. Jean-Pascal Padovani said his client had known Bouhlel casually and consumed drugs with him in recent months. “(Bouhlel) wasn’t really a soldier of God who went to Syria and came back to France,” Padovani said. “He was a depressed person who used terrorism to justify this act.”

Brigitte Erbibou, a psychologist who has long worked in Nice, said Bouhlel’s reported lack of religious conviction may not have precluded a sudden embrace of extremism, noting that people who have resorted to violence in the past can apply that instinct in other situations.

“This quick flip to violence in the name of a political ideology becomes legitimate,” she said. “The instructions of IS are to act wherever one is, by whichever means one can, so this (attack) matches exactly the recommendations of IS.”