No one immediately claimed responsibility for the attack, which bore the hallmarks of the extremist Islamic State group 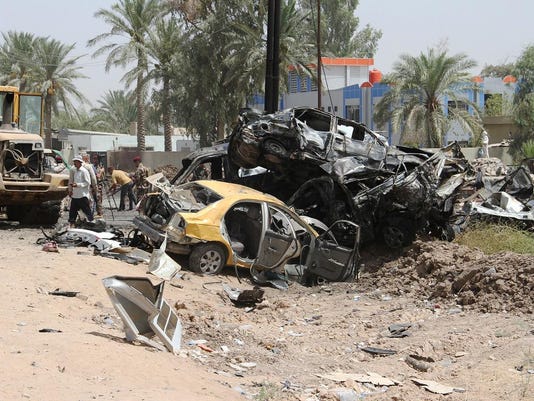 Iraqis inspect the damage at the site of a suicide bomb attack at the entrance to the town of Khales, northeast of Baghdad, on July 25, 2016.(Photo: Younis al-Bayati / Getty Images)

Baghdad — A suicide bomber rammed his explosives-laden car into a checkpoint outside a Shiite town north of Baghdad on Monday, killing at least 14 people, Iraqi officials said, while a string of bombings in the Iraqi capital killed nine more people.

Monday’s checkpoint bombing took place at one of the busy entrances to the town of Khalis, about 50 miles north of the Iraqi capital, a police officer said. The town is a Shiite enclave surrounded by Sunni areas in the restive Diyala province.

Eight policemen and six civilians were killed and up to 41 people were wounded, the officers said, adding that the explosion also damaged nearly 20 cars lined up at the checkpoint.

In an online statement, IS group claimed responsibility for the attack. The Associated Press could not verify the authenticity of the statement, but it was posted on a militant website commonly used by the extremists.

No one immediately claimed responsibility for these attacks, which bore the hallmarks of the extremist Islamic State group. Commercial areas and big gatherings of Shiite followers are among the most common targets for the extremist group.

Medical officials confirmed the casualty figures. Both officials spoke on condition of anonymity as they were not authorized to talk to the media.

Since late last year, the group has suffered a string of territorial losses, most recently in Fallujah, where it was driven out last month by Iraqi forces after occupying the city for more than two years. But the extremists have continued to carry out near-daily bombings in and around Baghdad, as well as complex attacks in other countries.

On Sunday, IS claimed responsibility for a suicide attack on a checkpoint in Baghdad that also killed 14 people and wounded 31.

The Islamic State group still controls significant areas in northern and western Iraq, including the country’s second-largest city of Mosul. Since its 2014 blitz, IS has declared an Islamic caliphate on the territory it holds in Iraq and Syria.

The Sunni militant group recently stepped up its attacks far from the front lines in what Iraqi officials see as an attempt to distract from their battlefield losses.