Trump has a suggestion for British Prime Minister Theresa May: Make Nigel Farage her government’s ambassador to the U.S. 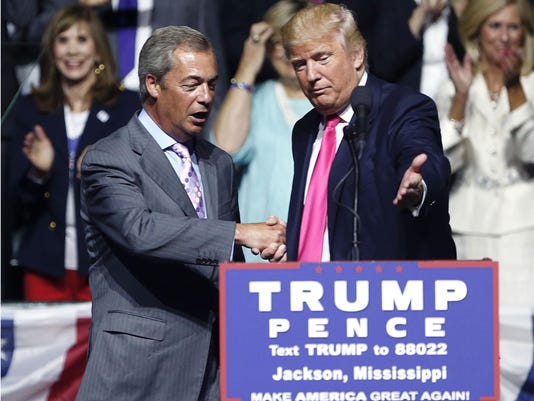 London — Donald Trump has a suggestion for British Prime Minister Theresa May: Make Nigel Farage, who played a key role in Britain’s vote to leave the European Union, her government’s ambassador to the United States.

But there are a few obstacles to the president-elect’s desire to have the acting leader of the U.K. Independence Party serve as Britain’s chief diplomat in the United States — not only is it the role of each country to name its overseas representatives, but there is already an ambassador in place.

The highly unusual call from Trump clearly shows the scale of his liking for Farage, who played a key role shaping public opinion in favor of taking Britain out of the EU ahead of the June referendum.

Trump tweeted late Monday night that “many people” would like to see Farage head Britain’s U.S. mission, adding: “He would do a great job!”

Trump’s tweet received a cool response in official circles. A spokesman for May said there is “no vacancy” at the British Embassy in Washington and praised the work of the incumbent ambassador, Kim Darroch.

May had earlier rejected the notion that Farage would serve in an unofficial role as liaison to Trump.

The negative response prompted an angry reaction from Farage in a column posted on the Breitbart website.

“At every stage I am greeted by negative comments coming out of Downing Street,” he wrote. “The dislike of me, UKIP and the referendum result is more important to them than what could be good for our country.”

He said he has known several key members of Trump’s team for years and is in a good position to help cement relations between Britain and the United States.

“The world has changed and its time that Downing Street did too,” Farage said. He also said he was “flattered” by Trump’s proposal that he serve as ambassador.

The role of ambassador to the United States is widely regarded as a vital position in the British diplomatic corps that also carries a certain amount of prestige and social clout.

Farage’s cozy public relationship with Trump developed during the presidential campaign, when he briefly appeared with the Republican nominee, and he was the first foreign politician to meet with the president-elect after the election. The two were photographed smiling broadly outside a golden elevator at the Trump Tower.

British officials say the government is considering inviting Trump to make a state visit after he assumes the presidency.