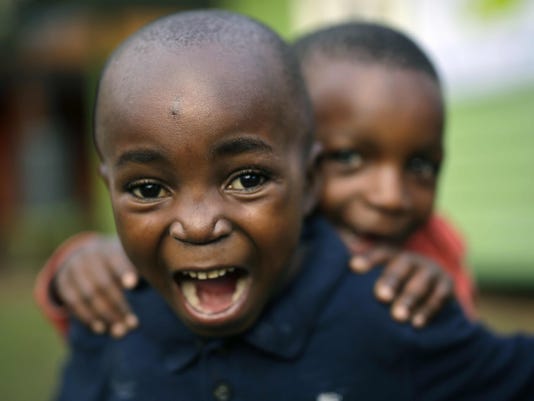 Six-year-old Alpha Meleki survived an attack on his village that left more than 20 dead, including his parents in January 2016. Rescuers found Meleki in a pile of bodies with a bullet wound to his belly.(Photo: Jerome Delay / The Associated Press)

Goma, Congo — More than 4 million children have lost at least one parent in Congo over the past two decades, the silent victims of continuous cycles of violence.

And more than 26 million orphans live in West and Central Africa, where Congo is located — the second highest number in the world behind South Asia, according to the United Nations.

These children have grown up amid conflict fueled by ethnic strife and the fight over Congo’s valuable minerals. The violence and displacement are eroding the tradition of families caring for their own.

The breakdown in family means some orphans are forced to look after themselves and their younger siblings. Some are vulnerable to recruitment by armed groups. And many also face sexual exploitation, in a country where rape has become commonplace on the streets.

“They are the orphans with a story of violence since 1994 — it’s a generation of victims that continues,” says Francisca Ichimpaye, a senior monitor at the En Avant Les Enfants INUKA center. And the children “lose their story in the violence.”

As Congo falls once again into violence in the face of a delayed election, here are profiles of some orphans in Goma.

Alpha Meleki was found in a pile of bodies after an attack by rebels on his village in Congo’s eastern Beni earlier this year. He had been shot and left for dead with his parents in the bush.

The bullet wounds and the vine-like surgery scar on the 6-year-old’s pudgy belly have only recently healed. He hobbles around, pulling his loose shorts up on his tiny body.

The emotional scars are still fresh. When held by someone new, Alpha sits limply. His large eyes glaze over, and sometimes glare with angry distrust. He saves his smiles for those he trusts, often seeking the hands of adults he knows.

He cannot stand to see others suffer. Whenever another child at the INUKA center needs medical attention, Alpha cries and screams.

In a quiet moment, he touches a short, wide scar on his head. He lets others touch it.

“They hit me with a machete,” he recalls.

The center says it could take years to find any family members, as attacks persist in the northeast.

At 17, Jeannette Umutsi has become the caregiver for her little brother, whom she hopes to protect from the horrors she has seen.

At first she recounts her story stoically and with distance. She was born only a few years after Rwanda’s 1994 genocide spilled into Congo. Armed fighters stormed her home, hit her in the leg with a shovel and nearly killed her sister.

She and her family fled her hometown of Kirolarwe in 2008 to escape the violence. In the next village, she hid in a toilet enclosure with wooden plank floors for three days to save herself from another attack. Alone, she would sneak out to grab tomatoes that grew nearby.

For days, she heard gunshots and saw dead bodies, including that of her uncle. As she continues to talk of violence, she breaks down into tears and gasps.

Her mother returned to save her. But she later died after giving birth to her brother Shukuru, now 5.

Her father used to be a fighter, she says. Once, he threatened to kill her with a machete. As she talks about him, she folds over herself, head in her skirt, and the fear is palpable in her eyes.

Finally she fled the family. She wrapped Shukuru up, put him on her back, and walked for days, struggling to breathe, on the way to Camp Mugunga in Goma. She is now an older sister to more than a dozen other children at the INUKA center, where she helps cook the fish and rice for lunch and rounds the kids up for naps.

Moise Munoka, 7, sits still, looks down and speaks in a near whisper when he recounts the loss of his mother.

She died in 2013 after health complications from rapes left her quite sick. Rape is a constant in Congo, where it has become a weapon of war. At the Children’s Voice Virunga Centre in Goma, where Moise and his sister Agata gather during the day, at least 30 children were born of rape.

Though Moise never knew his own father, he knows that he was probably a fighter who raped his mother. When asked if he wants to meet him one day, he scrunches his nose up and shakes his head in disgust, “No!”

He is happy to have left his war torn village of Massissi.

“It’s a bad place because there’s war, trouble, people don’t like each other, they like to kill,” he says. “There’s always dead people, and blood.”

He lights up as he explains that he and his sister are now being cared for by a widow, Arlette Kabuo Malimewa, 45. She has three children of her own and also cares for a third foster child.

Agata sleeps in the living room, which has several posters of Jesus Christ lining the walls. Moise has his own room, where his two book bags hang from nails on the wooden planks.

Malimewa sells bed covers in bright pinks and whites that hang over her black lava rock gate, and makes about $5 a week.

“I love them, but it is difficult,” she says. “I want to keep them until my death … because who would they go to?”

Anuarita Mahoro, 12, has been ostracized because she was born with a right hand problem that leaves her too weak to do hard labor.

She lived with her father until he was asked to chop wood for armed men who then killed him in 2014. Her mother lived with “the men of the forests,” as she refers to the fighters. They eventually killed her mother, too, and left.

Anuarita fled to her grandparents in Kiwanja. When her grandfather died, she was forced to leave her grandmother to find work to eat. Starving and sick, she was eventually taken in by a center for orphans.

Here, her right hand tucked between her legs and leaning on her left elbow, she apologizes.

“I have suffered so much so I might sound confused,” she says.

She hopes to return to her village and reclaim her grandmother’s land, showing those in the community her worth.

“After the death of my parents, the community discussed who would take this child. And no one was prepared to take me on as a parent. So since no one wanted me, when I grow up they better not come and ask me for any help,” she said, grinning widely, and then covering her face and laughing.

She would like one day to set up a center for orphans. And if she ever got the conversation she wants with the men who killed her parents, she solemnly reveals the one thought that won’t leave her mind.

“I would ask why they killed my father and my mother and didn’t kill me?”

Damien Matata Bizi looks down, his shoulders heavy, when he hesitantly recounts his past as an orphan who became a child soldier.

Many of the thousands of other former child soldiers in Congo over years made a similar choice, or had none at all. Rwanda’s 1994 genocide pushed fighters into Congo, and multiple rebel groups now fight over the mineral-rich region.

Matata Bizi became a rebel after his father, also an armed fighter, died. He was only 10 years old.

“I was angry when I learned of my father’s death. So I wanted to avenge my father, so I entered into the rebellion to fight,” he said. “My mother could never pay for school, and we could never find money to pay for food so I thought this was best.”

Matata Bizi says he was treated well, but others weren’t.

“The life that vulnerable children have is hard,” he says. “They don’t have education, they don’t have clothes, so it may be better to be in an armed group with the ability to find food and clothes than to be at a loss.”

When asked about having to kill people, his eyes narrow and he impatiently takes a deep breath, visibly angry.

“There’s a difference between the militants and child soldiers,” he says. “The adults have the occasion to reflect on what they’ve done. But for a child, we can only execute an order we are given. We don’t think of things, we do what we are ordered to do. “

Matata Bizi was found, rehabilitated by the United Nations and integrated into the army in 2009. He signed papers that say he is no longer a child soldier. He carries the dirtied, crumbling pages around in his shirt pocket. They brand him now.

He came to Goma in 2013. He was trained as a mechanic at the Don Bosco center in Goma but has no work. He says it’s easier to make more money and move up in rebel groups than in the army.

“War I know isn’t good, and neither is violence. It’s not good or normal,” he says. “But the armed groups exist because the country is badly organized. There’s no work. There’s no occupation for the young.”