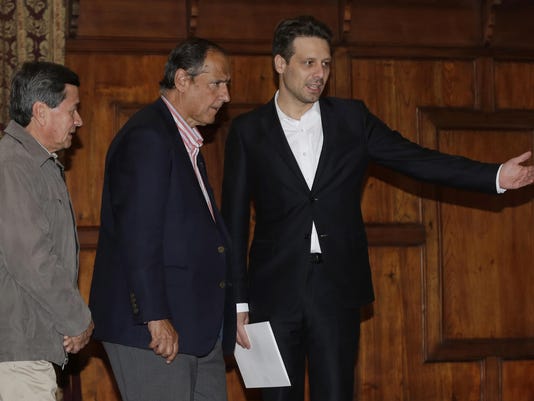 Santos said from the World Economic Forum in Davos, Switzerland, that details of the agreement hammered out during months of agonizing backchannel talks with the National Liberation Army would be announced at a news conference later Wednesday in Quito, Ecuador.

The two sides have been holding exploratory peace talks for more than three years. Almost a year ago they announced the start of formal negotiations, but those talks were frozen before even getting off the ground over Santos’ demand the group renounce kidnapping and free the politician it has been holding for 10 months.

“This is very, very good news for the country,” said Santos, who won last year’s Nobel Peace Prize for reaching a peace deal with the much-larger Revolutionary Armed Forces of Colombia. “We have been trying to start these official negotiations for over three years. It has been a very difficult process. But this second stage that starts next month is very important because it will allow us to have complete peace.”

The smaller group, known by its Spanish initials as the ELN, has an estimated 1,500 fighters and largely finances its insurgency through extortion and kidnappings. Like the bigger FARC, it is classified by the U.S. government as a foreign terrorist organization.

Unlike the peasant-based FARC, the ELN shares a tradition with other leftist insurgencies in Latin America that were formed by urban students and intellectuals in the wake of the Cuban Revolution.

Last year, many thought it had turned its back on criminal activity when it released a prominent politician who had been held for more than two years. Days later, though, a darker truth emerged: Instead of being freed, former Gov. Patrocinio Sanchez Montes de Oca had been exchanged for his older brother Odin Sanchez, a former congressman.

Ever since, Santos has held firm that he won’t allow talks to begin until Sanchez is free. While the rebels freed a group of rice farmers they also took captive, they’ve been holding onto Sanchez with the hopes of forcing the government to free several jailed rebels.

The ELN once before announced it would free Sanchez. But Santos said he was more confident it would follow through this time so that talks could start in Ecuador on Feb. 8.

“Simply put, if they don’t free him there will be no negotiations. That’s been a constant of my government,” Santos said. “But now we have an agreement, with specific dates.”

In a sign of the complications facing efforts to end the conflict, the FARC’s Southern Bloc on Wednesday said its forces had clashed on Jan 10 with a dissident rebel band opposed to the peace process. Representatives of the FARC, the army and the U.N. were investigating the incident.