At least 24 children killed when bus, truck collide in India

A truck loaded with sand collided with a school bus Thursday, killing at least 24 children and injuring two dozen others

At least 24 children killed when bus, truck collide in India 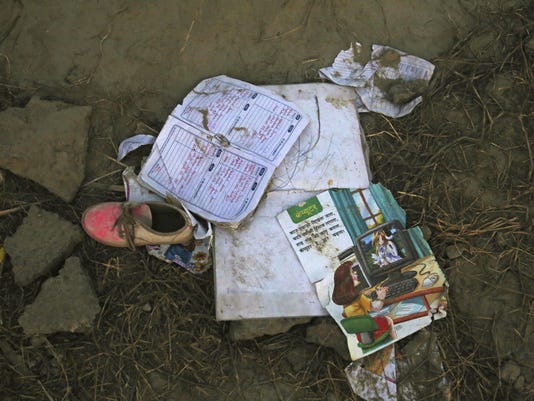 Schoolbooks lie scattered at the site of an accident in Aliganj, near Etah, India, Jan. 19, 2017. A truck loaded with sand collided with a school bus early Thursday, killing more than 20 young children in the northern Indian state of Uttar Pradesh, police said.(Photo: Altaf Qadri / AP)

At least two dozen other children were injured when the speeding truck collided head-on with the bus, said Javeed Ahmed, the state’s top police official.

The children, between the ages of 3 and 12, were studying at a school in the town of Etah.

Another police officer, Daljeet Chaudhry, said visibility was low due to dense fog.

Police officer Parasuram Singh said the truck driver suffered serious injuries to his legs, which were amputated at a hospital.

The area is about 170 miles southeast of New Delhi.

State education authorities had closed all schools in the district because of a severe cold wave, and Ahmed said authorities would check why the school had stayed open.

Prime Minister Narendra Modi tweeted his condolences, saying: “Anguished by tragic accident in UP’s Etah. I share the pain of the bereaved families & condole (the) passing away of young children.”

Accidents are common on Indian roads, with most blamed on reckless driving, poorly maintained roads and aging vehicles.