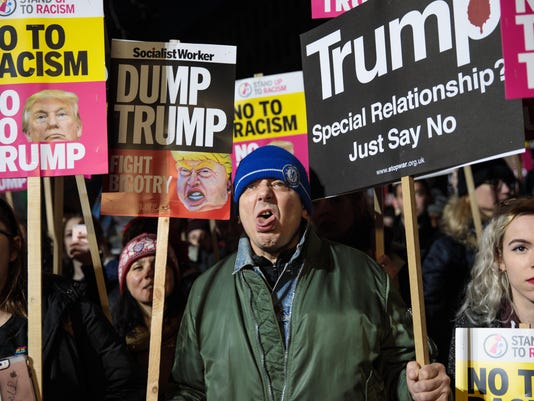 Donald Trump invoked the image of a U.S. plagued by weak borders, lopsided alliances and bad trade deals in an inauguration speech that hammered on his “America First” view of foreign policy and undermined hopes abroad that the new president would moderate his protectionist tone.

The speech reaffirmed campaign themes that had unnerved foreign leaders fearful the U.S. would back away from its role as the “indispensable nation” and put less stock in traditional alliances, globalism and free trade. On the revamped White House website, the Trump administration vowed to withdraw from the Trans-Pacific Partnership and renegotiate the North American Free Trade Agreement.

“It was Trump and his populist base against the world — including every other country and the Washington establishment, and that surprised me,” said Jacob Kirkegaard, a senior fellow with the Peterson Institute for International Economics in Washington. “What really struck me the most was the dark tenor of the speech. This was Midnight in America,’ ” he added, referring to President Ronald Reagan’s optimistic “Morning in America” theme.

A key message in the speech was the need to protect U.S. jobs and borders, and Trump also vowed the U.S. would “unite the civilized world against radical Islamic terrorism.”

Initial reaction to Trump’s inauguration speech in Mexico was swift. Trump has sparred with Mexico over the need to rework NAFTA, which endangers the approximately 80 percent of Mexican exports that are sent to the U.S.

“We will take the position of putting Mexico’s interests first,” said Marcela Guerra, a senator from President Enrique Pena Nieto’s Institutional Revolutionary Party who heads the chamber’s committee on North American relations. “We’ll establish negotiations of mutual respect and benefits, and at no point will we agree to anything that puts our sovereignty at risk.”

Pena Nieto struck a more diplomatic tone, saying on Twitter that he’ll work to establish a “respectful dialogue” with the U.S. guided by “sovereignty” and “national interests.” A delegation of senior Mexican officials will travel to Washington next week to meet with Trump’s advisers.

“Together, we benefit from robust trade and investment ties, and integrated economies, that support millions of Canadian and American jobs,” Trudeau said. “We both want to build economies where the middle class, and those working hard to join it, have a fair shot at success.”

In Lebanon, the secretary-general of the Arab League, Ahmed Aboul Gheit, expressed hope Trump would reverse course on his promise to move the U.S. embassy in Israel to Jerusalem from Tel Aviv, saying the negative consequences would otherwise “be profound.”

Turkish Foreign Minister Mevlut Cavusoglu, who was in Washington for the inauguration, said after the ceremony that he’d spoken with several Trump nominees, including prospective Secretary of State Rex Tillerson and Defense Secretary James Mattis, according to the official Turkish news agency Anadolu.

Cavusoglu said the officials he spoke with promised a stronger U.S.-Turkish relationship after a series of “crises of confidence” under the Obama administration. He said he hoped differences over U.S. support for Kurdish militants in Syria, and a dispute about extradition of the U.S.-based Islamic cleric Fethullah Gulen — blamed by Turkey for instigating a failed coup — can be overcome under Trump.

While Trump emphasized his plan to buy and hire American, he also said the U.S. will “seek friendship and goodwill with the nations of the world.” Yet it was his dark tone and focus on “America First” that left the biggest initial impression abroad.

“I had hoped it wasn’t going to be a reiteration of his campaign speeches, that it would be a really fresh and hopeful beginning to his presidency,” said Danielle Pletka, senior vice president of foreign and defense policy studies at the conservative American Enterprise Institute. “It wasn’t that, though it was very true to those who voted for him.”

Champagne corks popped Friday in Moscow as Russians celebrated the start of Trump’s presidency, confident of better relations ahead between the two countries.

“It’s weird, but it’s great, and for the first time ever Russians are applauding the victory of a U.S. presidential candidate. It’s a sign of the times,” political analyst Stanislav Byshok said.

Trump’s promises to fix ravaged relations with Moscow have elated Russia’s political elite following spiraling tensions with Washington over the Ukrainian crisis, the war in Syria and allegations of Russian meddling in the U.S. election.

“We are ready to do our share of the work in order to improve the relationship,” Prime Minister Dmitry Medvedev said on Facebook.

About 100 Trump sympathizers, nationalists and spin doctors gathered at a hipster party just a few hundred meters away from the Kremlin to celebrate Friday, with a triptych of Trump, Russian President Vladimir Putin and French nationalist politician Marine Le Pen in the center of the hall.

An hour before Trump took the stage in Washington, the sound of opening champagne bottles echoed in the vaulted hall. The party was co-sponsored by Tsargrad TV, which is led by ultra-right ideologue Alexander Dugin.

“Yes, it’s a holiday,” said a beaming Dmitry Rode, a communications executive with a glass of champagne in his hand. “We all hope that relations between our countries and more importantly between our peoples will help to develop our economies. We’re neighbors, we’re just 50 kilometers (30 miles) away from each other.”

Some party-goers wore Guy Fawkes masks, associated with hackers, in a sly reference to charges that Russia interfered in the U.S. election.

“I’m happy for all Russian hackers,” said 27-year old Filip Nikolsky, who wore a sweatshirt with the “You’ve Been Hacked” slogan.

He said he doesn’t know if the allegations are true but “if it’s true, why shouldn’t we be happy?”

Still, the mood at the party in downtown Moscow was subdued compared to outbursts of joy at the news of Trump’s victory in November.

Revelers on Friday watched Trump make his inauguration speech in silence, and no one stood up for the American anthem, although the host suggested that all Americans should do so.

Dmitri Trenin, director of the Carnegie Moscow Center, predicted that Moscow will face a pragmatic but very tough partner in Trump.

“Russia’s potential is incomparable to that of the United States,” he said, adding that Moscow will have to apply a lot of skills “to play from the position of weakness and not lose.”