The group was taking a wait-and-see approach to Donald Trump’s presidency, but that already it had “serious concerns” 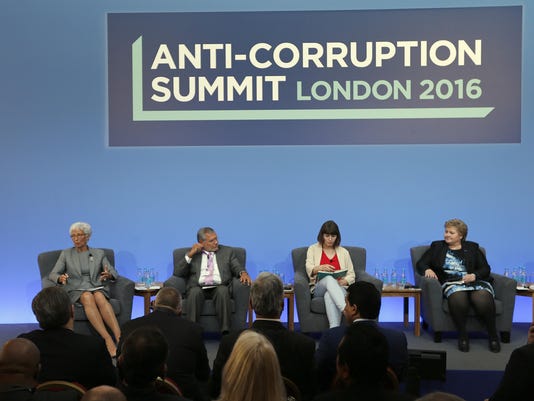 In this May 12, 2016 file photo, Christine Lagarde, Managing Director of the International Monetary Fund, from left, Jose Ugaz, Transparency International, Daria Kaleniuk and Norway's Prime Minister Erna Solberg take part in a panel discussion at the Anti-Corruption Summit in London. Watchdog group Transparency International on Jan. 25, 2017, is warning that people who turn to populist politicians who promise to change systems and end corruption may only be feeding the problem.(Photo: Frank Augstein / AP)

Berlin — People who turn to populist politicians promising to upset the status quo and end corruption may only be feeding the problem, an anti-corruption watchdog group warned Wednesday.

Transparency International said in its annual Corruption Perceptions Index for 2016 that in countries with populist or autocratic leaders, “instead of tackling crony capitalism, those leaders usually install even worse forms of corrupt systems.”

The group’s board chairman, Jose Ugaz, cited Hungary and Turkey as examples. Their scores have worsened in recent years under leaders with authoritarian leanings, while Argentina, which ousted a populist government, has improved in the rankings, he said.

Based on expert opinions of public sector corruption, the annual report rated Denmark and New Zealand as the least-corrupt countries, followed by Finland, Sweden, Switzerland, and Norway. Somalia was ranked most corrupt, followed by South Sudan, North Korea, and Syria.

Rounding out the Top 10 least corrupt were Singapore, the Netherlands, Canada, and the tie-placing trio of Germany, Luxembourg and the United Kingdom in the No. 10 spot. The United States placed 18th, down from 16th in 2015.

Transparency International research director Finn Heinrich told The Associated Press that the organization was taking a wait-and-see approach to Donald Trump’s presidency, but that already it had “serious concerns.”

“Donald Trump came on board as the people in Hungary and Turkey, on an anti-corruption ticket. He said, ‘We’re going to drain this swamp,’” Heinrich said. “But if you look at his action so far, there is nepotism…. The people in his Cabinet have many conflicts of interest. They are not people who stand for transparency.”

Hungarian government spokesman Zoltan Kovacs questioned the report. He said Transparency apparently had a higher opinion of Hungary before Prime Minister Viktor Orban’s return to power in 2010 when the previous Socialist-led government “stole away the funds from the European Union” — a reference to corruption in the construction of a Budapest subway line partially financed by the EU.

“It is at least strange to accuse Hungary now, under the Orban government, of a problem with corruption,” Kovacs said.

The index scores countries on a range of factors, such as whether government officials are held to account or go unpunished for corruption; the perceived prevalence of bribery; and whether public institutions respond to citizens’ needs.

Nearly 70 percent of the 176 countries scored below 50 on the 100-point scale, with a zero meaning a country is perceived to be highly corrupt and 100 indicating it’s perceived to be very clean.

“This year, more countries declined in the index than improved, showing the need for urgent action,” the report said.

The country that dropped most sharply in the rankings was Qatar, which has faced criticism over alleged human rights abuses involving migrant construction workers since it was chosen to host the 2022 World Cup of soccer. It dropped 10 points, falling to 31st on the list from 22nd last year.

Still, Heinrich said Qatar’s government has in the past shown itself “willing and keen” to fight corruption, and that Transparency would appeal to them for more fundamental reforms to ensure better freedom of speech and more media freedom, among other things.

“You can’t fight corruption without having accountability and transparency in the entire public process,” he said.

Afghanistan, a perennial fixture near the bottom of the list, improved the most in 2016. Its score on the Transparency International index rose four points, but still was ranked 169th, just ahead of Libya, Sudan and Yemen.

Pablo Gorondi contributed to this report from Budapest.