The 27-year-old was known to those who monitor extremist groups, said an official with a refugee advocacy group

Alexandre Bissonnette is escorted to a van after appearing in court for Sunday's deadly shooting at a mosque Monday in Quebec City. The French Canadian suspect known for his far-right, nationalist views was charged Monday with six counts of first-degree murder and five counts of attempted murder in the shooting rampage at the Quebec City mosque that Canada's prime minister called an act of terrorism again Muslims.(Photo: Jacques Boissinot / AP)

Quebec City — A French Canadian known for far-right, nationalist views was charged Monday with six counts of first-degree murder and five counts of attempted murder over the shooting rampage at a Quebec City mosque that Canada’s prime minister called an act of terrorism against Muslims.

Suspect Alexandre Bissonnette made a brief court appearance and did not enter a plea in the attack that left six people dead during evening prayers Sunday. Wearing a white prisoner jump suit, his hands and feet shackled, he stared down at the floor and fidgeted, but did not speak.

The 27-year-old suspect, who has espoused support for the French far-right party of Marine Le Pen and had liked U.S. President Donald Trump on his Facebook page, was known to those who monitor extremist groups in Quebec, said François Deschamps, an official with a refugee advocacy group. “It’s with pain and anger that we learn the identity of terrorist Alexandre Bissonnette, unfortunately known to many activists in Quebec for taking nationalist, pro-Le Pen and anti-feminist positions at Laval University and on social media,” Deschamps wrote on the Facebook page of the group, Bienvenues aux Refugiés, or Welcome to Refugees.

An anthropology and political science major at Laval University in Quebec City, Bissonnette had also expressed support on his Facebook profile for “Génération Nationale,” a group whose manifesto includes the rejection of “multiculturalism.” 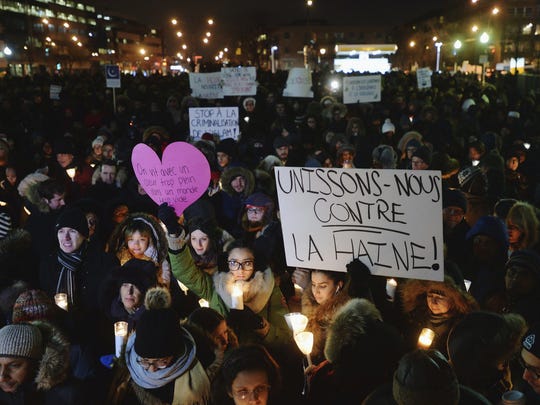 People attend a vigil in Montreal on Monday for victims of Sunday's shooting at a Quebec City mosque. (Photo: Ryan Remiorz / AP)

More than 50 people were at the Quebec Islamic Cultural Centre when the shooting erupted. In addition to the six dead, 19 people were wounded — all men. Of the five victims who remained hospitalized, two were in critical condition, authorities said. The dead ranged in age from 39 to 60.

Prime Minister Justin Trudeau and Quebec Premier Philippe Couillard both characterized the attack as a terrorist act, which came amid heightened tensions worldwide over Trump’s travel ban on seven Muslim countries. Le Pen, leader of the National Front in France, is known for her anti-Muslim, anti-immigrant positions and has won the endorsement and admiration of white supremacists.

Canada is generally welcoming toward immigrants and all religions, but the French-speaking province of Quebec has had a long-simmering debate about race and religious accommodation. The previous separatist government of the province called for a ban on ostentatious religious symbols, such as the hijab, in public institutions.

Trudeau said in Parliament the victims were targeted simply because of their religion and spoke directly to the more than 1 million Muslims who live in Canada, saying, “We are with you.”

“Thirty-six million hearts are breaking with yours,” Trudeau said. “Know that we value you.”

The prime minister later attended a vigil outside the mosque.

The suspect was arrested in his car on a bridge near d’Orleans, where he called 911 to say he wanted to cooperate with police. Authorities, who initially named two suspects, said the other man taken into custody was a witness to the attack and was released earlier Monday. They said they did not believe there were other suspects but were investigating.

Police did not give a motive for the attack.

Trump called Trudeau to express condolences to the Canadian people and to offer any assistance that might be needed.

The White House pointed to the attack as an example of why Trump’s policies were needed. “We condemn this attack in the strongest possible terms. It’s a terrible reminder of why we must remain vigilant and why the president is taking steps to be pro-active, rather than reactive when it comes to our nation’s safety and security,” White House spokesman Sean Spicer said.

The victims were businessmen, a university professor and others who had gathered for evening prayers, said Mohamed Labidi, the vice president of the mosque.

“’It’s a very, very big tragedy for us,” Labidi said tearfully. “We have a sadness we cannot express.”

He said the victims were shot in the back. “Security at our mosque was our major, major concern,” he said. “But we were caught off guard.”

The shooting took place just before 8 p.m. Sunday. Witnesses described chaos as worshippers scrambled to find friends and loved ones, as police responding to the scene called for backup.

Couillard said he would “not go there” when asked if he blamed recent rhetoric in in the U.S. for the attack.

“Quebec is a good, generally loving society, but we have these devils as other societies have. We have to recognize that and fight them,” Couillard said at a news conference in Quebec City at which he and Muslim leaders held hands in a display of solidarity.

“The Muslim community was the target of this murderous attack,” Couillard said, adding that solidarity rallies would be held across Quebec later Monday.

The mosque has been a target of hate crimes in the past, including last summer when pig’s head was left on its doorstep during Ramadan, when Muslims fast from dawn to sunset. Practicing Muslims do not eat pork.

Quebec City Mayor Regis Labeaume, appearing shaken, said: “No person should have to pay with their life, for their race, their color, their sexual orientation or their religious beliefs.”

Worshipper Ali Hamadi said he left the mosque a few minutes before the shooting and a friend, Abdelkrim Hassen, was killed. He said Hassen, who worked in information technology for the government, had three daughters and a wife, whom he had to notify of the death.

Majdi Dridi of the Muslim Association of Canada said he knew two of the victims. One was a work colleague who was a father of three little girls, he said.

“I don’t know what to say, I just hope that his family and his children can have the patience to accept what happened,” Dridi said

Trudeau had earlier reacted to Trump’s visa ban for people from some Muslim-majority countries by tweeting Saturday: “To those fleeing persecution, terror & war, Canadians will welcome you, regardless of your faith. Diversity is our strength #WelcomeToCanada.”

Trudeau also posted a picture of himself greeting a Syrian child at Toronto’s airport in late 2015. Trudeau oversaw the arrival of more than 39,000 Syrian refugees soon after he was elected.

The mayor of Gatineau, Quebec, near Canada’s capital of Ottawa, said there would be an increased police presence at mosques around his city following the attack. The New York Police Department also said it was stepping up patrols at mosques and other houses of worship.