Masood had been arrested previously for assault, possession of offensive weapons and public order offenses 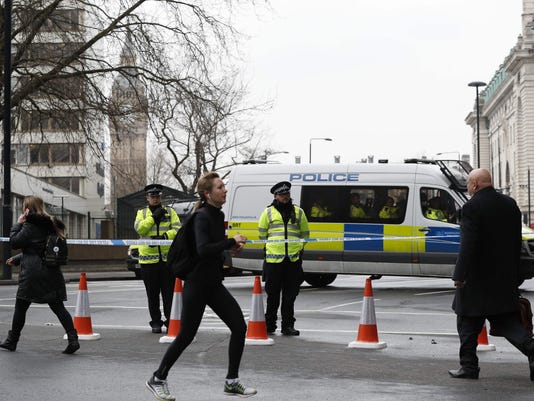 London — British police have identified the person responsible for the terror attack near Parliament as 52-year-old Khalid Masood.

The police say in a statement Thursday that Masood was born in southeastern England and was most recently living in the West Midlands, in central England.

Police say Masood, who had a number of aliases, wasn’t the subject of any current investigation and that “there was no prior intelligence about his intent to mount a terrorist attack.”

He had been arrested previously for assault, possession of offensive weapons and public order offenses.

His first conviction was in November 1983 for criminal damage and his last was in December 2003 for possession of a knife.

The Islamic State group claimed responsibility for the attack by Masood, who plowed an SUV into pedestrians on London’s Westminster Bridge before stabbing a police officer to death on the grounds of Parliament, and the investigation shifted Thursday to a city in central England long known as an incubator for radicalism.

The attacker was born in Britain and had been investigated for links to religious extremism, British Prime Minister Theresa May said in a sweeping speech to lawmakers in which she also encouraged people in London to go about their lives. At least eight people were arrested in raids, some in the central city of Birmingham.

The Islamic State group said through its Aamaq News Agency that the attacker was a soldier of the Islamic State who “carried out the operation in response to calls for targeting citizens of the coalition” of countries fighting IS in Syria and Iraq. In addition to the police officer and the attacker, who was shot by police, two people died on Westminster Bridge and at least 30 others were injured, seven critically.

May described it as “a perversion of a great faith.”

The IS group has been responsible for numerous bloody attacks around the globe and has specifically called for Western followers to carry out this kind of attack in their own countries, though the group has also claimed events later found to have no clear links to it. The London attack echoed vehicle rampages in Nice, France, and Berlin last year that the group claimed under its banner.

May set an unyielding tone Thursday, saluting the heroism of police as well as the ordinary actions of everyone who went about their lives in the aftermath.

“As I speak millions will be boarding trains and airplanes to travel to London, and to see for themselves the greatest city on Earth,” she told lawmakers. “It is in these actions — millions of acts of normality — that we find the best response to terrorism — a response that denies our enemies their victory, that refuses to let them win, that shows we will never give in.”

Parliament began its moment of silence at 9:33 a.m., honoring the shoulder number of the slain officer, Keith Palmer, a 15-year veteran of the Metropolitan Police and a former soldier. Then Parliament, which was locked down after the attack, returned to business — a counter to those who had attacked British democracy.

Police believe the attacker acted alone and there is no reason to believe “imminent further attacks” are planned, May said. He had been investigated before but police believed he was a peripheral figure.

The raids took place in a major thoroughfare of Birmingham that is rundown, mostly Muslim and relatively poor.

Many suspects in British terror attacks and plots have roots in the city described in a recent terror analysis as a hotbed of Islamist extremism. Several local mosques have also been linked to extremist clerics.

British security forces have foiled 13 plots in the past four years. There are currently thousands of extremists in the U.K. who are known to officials but only a fraction of whom are under surveillance, according to a security official who spoke on condition of anonymity because he was not authorized to speak about ongoing security operations. It takes dozens of officers to watch just one terror suspect.

Attention will be focused on how much the country’s security and intelligence community knew about the attacker, who witnesses said went straight after the police officer after ramming the pedestrians.

“This man got out of the car with two knives in his hands and while he was running he was stabbing people. He arrived in front of the entrance to the parliament and he started to stab a policeman. You can imagine if someone was playing a drum on your back with 2 knives - he gave him around 10 stabs in the back, then he left the policeman and he came toward us,” said Vincenzo Mangiacarpe, an Italian boxer who was visiting Parliament.

Britain’s domestic security agency, MI5, was criticized recently for losing track of a former Guantanamo detainee who won a payout from the British government for his detention and treatment in the prison camp and later blew himself up and injured several others.

Mayor Sadiq Khan called for Londoners to attend a candlelit vigil at Trafalgar Square on Thursday evening in solidarity with the victims and their families and to show that London remains united.

Metropolitan Police counterterrorism chief Mark Rowley revised the death toll from five to four, including the attacker, the police officer and two civilians. He said that 29 people required hospitalization and seven of them were in critical condition. He also said that authorities were still working out the number of “walking wounded.” Police had previously given the total number of injured as around 40.

May said people from 11 countries were among the victims. They included: 12 Britons, three French, two Romanians, four South Koreans, one German, one Pole, two Irish, one Chinese, one Italian, one American and two Greeks required hospital treatment. Police earlier said that seven of the 29 who are hospitalized are in critical condition.

The threat level for international terrorism in the U.K. was already listed at severe, meaning an attack was “highly likely.”

London has been a target for terrorism many times over past decades. Just this weekend, hundreds of armed police took part in an exercise simulating a “marauding” terrorist attack on the River Thames.

May underscored that the attack targeted “free people everywhere,” and she said she had a response: “You will not defeat us.”