Japan says this is a time to raise pressure on N. Korea

Japan says this is a time to raise pressure on N. Korea 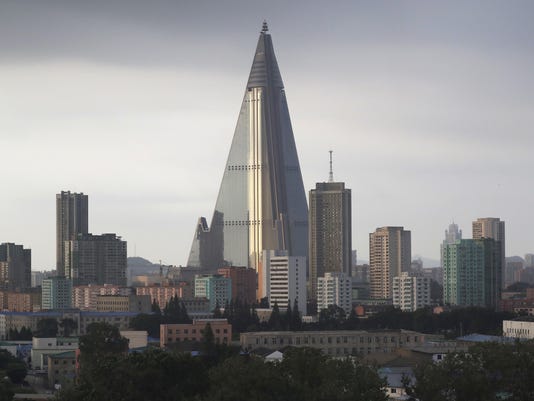 The sky is overcast at the end of a work day on Monday, July 17, 2017, in Pyongyang, North Korea, where the 105-story pyramid-shaped Ryugyong Hotel is seen in this photograph towering over residential apartments. The hotel has been under construction since 1987 and was intended to be a landmark and a symbol of progress and prosperity, but the economic difficulties that the country went through forced the project into repeated delays and nearly 30-years later, it has become a major Pyongyang landmark but has never been used as a hotel, as it was intended.(Photo: Wong Maye-E / AP)

United Nations — Japan’s government spokesman says this is a moment to raise pressure on North Korea — not a time for dialogue.

Norio Maruyama said North Korea has reached “a new level” with its latest launch of an intercontinental ballistic missile “and this is a time to raise pressure in order to be able to conduct a serious dialogue.”

He told a briefing Monday for a group of U.N. correspondents that “dialogue for the sake of dialogue is meaningless.”

Maruyama said Japan is considering possible new sanctions, including on oil imports. In his words, “we need to see what sanctions are most successful.”

He urged all countries to implement U.N. sanctions and called on China and Russia to use their influence to play “an even more constructive role” with North Korea.