Residents of the capital, Caracas, stockpile food and cash before what many expected would be a chaotic weekend 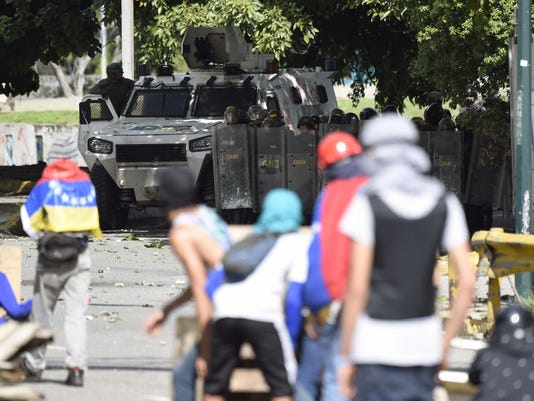 Opposition activists confront riot police during a protest against President Nicolas Maduro's government and in defiance of a new ban on rallies ahead of next July 30 controversial vote, in Caracas on July 28, 2017.(Photo: JUAN BARRETO / AFP/Getty Images)

Caracas, Venezuela — The death toll from nearly four months of anti-government protests climbed to at least 113 on Friday as Venezuela’s opposition called on backers to defy a protest ban ahead of a vote to launch a rewrite of the constitution.

Residents of the capital, Caracas, lined up for hours at grocery stores and banks to stockpile food and cash before what many expected would be a chaotic weekend.

Protesters say the election of a constitutional assembly on Sunday will allow President Nicolas Maduro to eliminate checks and balances and replace Venezuela’s democratic system with an authoritarian, single-party regime.

Maduro has deployed the military and police to clear blockades and protect a vote he says is meant to end a power struggle with the opposition-controlled National Assembly, which he blames for the spiraling political, economic and social crisis.

The opposition is boycotting the vote and asking backers to block streets starting Friday afternoon despite the official protest ban, potentially setting the stage for more deadly clashes.

Venezuela has seen near-daily protests since April against government attempts to undermine the opposition amid widespread shortages of food, medicines and other essentials.

Late Thursday the prosecutor’s office released a list of 109 dead from violence related to demonstrations and street blockades across the country since the protests began.

It later reported at least five more deaths via Twitter. They included a police officer slain in the town of Ejido in the western state of Merida, which has been the scene of violent clashes in recent days.

But the prosecutor’s office said one death occurred in an “irregular situation,” leaving unclear whether it was related to the protests.

About 13,000 travelers were trapped in Caracas after Colombian airline Avianca canceled service to and from Venezuela. Avianca officials said they were chartering planes to fly stranded passengers out of Venezuela.

Meanwhile the Colombian government said Friday that it will grant temporary legal status to more than 150,000 Venezuelans who entered the country legally and overstayed their visas.

In recent years Colombia has received hundreds of thousands of Venezuelan migrants, many of them with Colombian origins, fleeing the shortages, triple-digit inflation and a homicide rate that is among the world’s highest.

Delta, one of the last airlines still serving Venezuela, said on Twitter that it could not guarantee service after September. The airline declined further comment.

On Thursday the U.S. State Department said it was ordering relatives of American diplomats to leave Caracas, allowing U.S. government workers to depart the embassy there and limiting the movement of those who stay.

An updated travel warning urged U.S. citizens not to travel to Venezuela due to social unrest and violence.