Divers find remains of all missing from USS McCain collision

Divers find remains of all missing from USS McCain collision 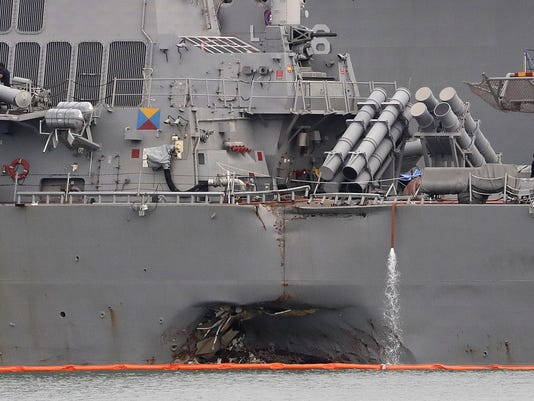 In this Aug. 22, 2017 file photo, the damaged port aft hull of the USS John S. McCain is visible while docked at Singapore's Changi naval base in Singapore. Divers have recovered the remains of all 10 sailors who went missing after the USS John S. McCain and an oil tanker collided near Singapore last week, the U.S. Navy said Aug. 28, 2017.(Photo: Wong Maye-E / AP)

Singapore — Divers have recovered the remains of all 10 sailors who went missing after the USS John S. McCain and an oil tanker collided near Singapore last week, the U.S. Navy said Monday.

Navy and Marine Corps divers had been searching in flooded compartments of the destroyer for days after the damaged ship docked in Singapore. The cause of the Aug. 21 collision is under investigation.

The crash ripped a gash in the McCain’s hull, flooding crew berths and machinery and communications rooms.

The commander of the Navy’s Japan-based 7th Fleet was fired last week after a series of accidents this year raised questions about its operations. The firing of Vice Adm. Joseph Aucoin, a three-star admiral, was a rare dismissal of a high-ranking officer for operational reasons.

The Navy also ordered an operational pause for its fleets worldwide to make sure all steps are being taken to ensure safe and effective operations. The Pacific Fleet will also carry out a ship-by-ship review of its vessels, looking at navigation, mechanical systems, bridge resource management and training.

The victims ranged in age from 20 to 39 years old and came from eight U.S. states: