US boosts aid to Jordan despite Trump threats of cuts

The administration has decided to give Jordan $1.275 billion annually until 2022

US boosts aid to Jordan despite Trump threats of cuts 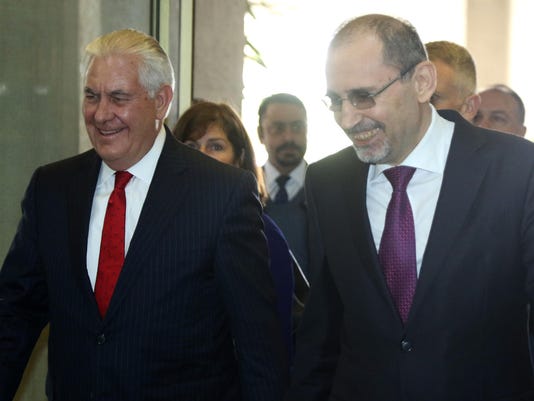 Amman, Jordan – President Donald Trump’s rhetoric on punishing countries that don’t agree with U.S. policy in the Middle East collided with reality on Wednesday as his administration announced it would boost aid to Jordan by more than $1 billion over the next five years.

Despite Trump’s repeated threats to cut assistance to such nations, Secretary of State Rex Tillerson and Jordan’s Foreign Minister Ayman al-Safadi signed the increased aid package, which represents a 27-percent increase over current levels and is two years longer than the existing one negotiated by the Obama administration.

Tillerson called the package “a signal to the rest of the world that the U.S-Jordan partnership has never been stronger.”

Jordan is a critical American partner in the volatile Middle East but has opposed the administration’s approach to the Israeli-Palestinian conflict. Jordan voted in December to condemn the U.S. for recognizing Jerusalem as Israel’s capital and criticized the U.S. last month for withholding tens of millions of dollars in funding for Palestinian refugees, many of whom live in the country.

Nonetheless, Wednesday’s memorandum of understanding will provide Jordan with $1.275 billion in U.S. aid annually until 2022. That’s $275 million more per year than the current level. The annual amount includes $750 million in economic aid that will support Jordanian reform efforts and $350 million in military assistance.

Both Tillerson and al-Safadi acknowledged the disagreements but said the end goal of both countries remains the same.

“We have different views on Jerusalem but we share a commitment to peace,” al-Safadi said.

“We have differences as any countries may have from time to time, over tactics I think more than final objectives,” Tillerson said. “I think our final objectives are quite clear and are shared and those are unchanged. We may take different approaches but we consult and we know that what we’re trying to achieve at the end is still the same.”

Jordan, a longtime partner of the U.S and one of only two Arab nations to have full diplomatic relations with Israel, plays an instrumental role in the region and in Israeli-Palestinian peace efforts. Jordanian officials were disturbed by Trump’s Jerusalem announcement and said it could hurt efforts to forge a two-state solution to the conflict.

Al-Safadi said Jordan sees no alternative to a two-state solution and that his country looks forward to a peace proposal that the Trump administration has been preparing for release in the coming months.

Tillerson said the proposal is “fairly well advanced” but would not comment on when the administration might put it forward.

Wednesday’s aid announcement represents something of a victory for Tillerson and Defense Secretary Jim Mattis, both of whom argued against the Jerusalem decision and had lobbied to continue assistance to Jordan on national security grounds. Trump and the U.S. Ambassador to the United Nations, Nikki Haley, have both spoken in favor of cutting aid to nations that don’t back the administration’s positions.

Greeting Tillerson at his palace in Amman, Jordan’s King Abdullah II acknowledged the secretary’s stance in the administration’s decision. “Thank you, for I know that you played a very vital role,” he said.

“Let them vote against us,” Trump said at the time. “We’ll save a lot. We don’t care. But this isn’t like it used to be where they could vote against you and then you pay them hundreds of millions of dollars. We’re not going to be taken advantage of any longer.”

In January, the administration withheld more than half of a $125-milllion pledge to the U.N. Relief and Works Agency, which provides services to millions of Palestinians living in the West Bank, Gaza, Jordan and Lebanon.

Jordan hosts almost half of the roughly five million Palestinian refugees and their descendants in the region. As such, it will be hit hard by the cuts because it depends on UNRWA welfare, education and health services for these people and is coping with an economic downturn and rising unemployment.

Tillerson said continued U.S. funding for UNRWA would depend in part on whether other donors step up their contributions.