Thousands of well-armed rebel fighters are in Syria

The Syrian government’s battle to recapture the rebel-held suburbs of Damascus is likely to be a long, bloody fight

Thousands of well-armed rebel fighters are in Syria 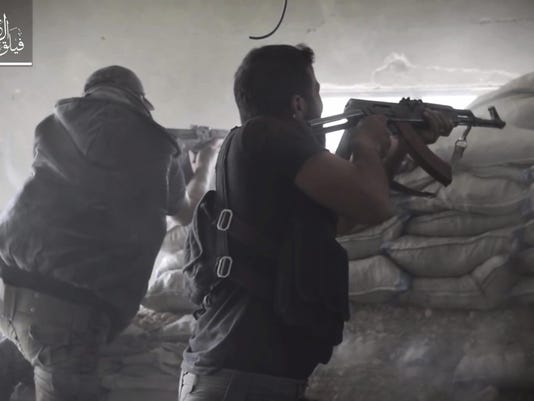 This frame grab from video provided Nov. 24, 2017, by the Syrian insurgent group Failaq al-Rahman, shows rebel fighters with Failaq al-Rahman, firing their weapons during clashes with government forces in the suburbs of the Syrian capital Damascus. Many of the fighters entrenched in the Damascus suburb of eastern Ghouta are originally from the area and move around using an elaborate network of underground tunnels, giving them an advantage against President Bashar Assad's forces and their allies.(Photo: AP)

Beirut – The Syrian government’s battle to recapture the rebel-held eastern suburbs of Damascus is likely to be a long and bloody fight because of the presence of thousands of battle-hardened fighters who have had years to prepare.

Many of the fighters entrenched in eastern Ghouta are originally from the area and move around using an elaborate network of underground tunnels, giving them an advantage against President Bashar Assad’s forces and their Russian- and Iranian-backed allies.

The territory of some 400,000 residents is the last major opposition-controlled area near Assad’s seat of power, and the rebels have been targeting the capital with volleys of mortar shells, disrupting life in a reminder that they can deprive the city of peace as the government, backed by Russia, rains down bombs and carnage on the besieged area. If government forces retake eastern Ghouta, only one small pocket south of the capital held by the Islamic State group will remain out of government control.

In a letter on Monday to U.N. Secretary General Antonio Guterres, the three main rebel factions in eastern Ghouta said they were committed to making al-Qaida-linked fighters and their families leave within 15 days. An official with one of the most powerful groups, the Army of Islam, said that if the al-Qaida-linked fighters don’t leave or abandon the fight, “all options” are open against them, including the use of force.

Here is a look at the rebel groups involved in the battle for eastern Ghouta.

One of the most powerful rebel factions in Syria, the Army of Islam is backed by Saudi Arabia and adheres to the ultraconservative Salafi ideology of Islam. It was founded by Zahran Alloush, who was in prison for anti-government activities and adopting a hard-line Islamic ideology when the uprising against Assad began in March 2011. He was released months later.

Since the rise of the Islamic State group in 2014, the Army of Islam has repeatedly clashed with the extremists, as well as with al-Qaida-linked fighters. The group is headquartered in the town of Douma, the most populated area in eastern Ghouta.

The group started with a small number of fighters soon after protests in Syria turned into an armed insurgency, and grew under Alloush to an estimated 10,000 fighters armed with tanks, armored personnel carriers, artillery and mortars.

The Army of Islam has been blamed for major human rights violations, including the 2013 kidnapping of a prominent opposition activist, Razan Zeitouneh, and her colleagues, who remain missing. The Army of Islam denies it was behind the kidnapping.

In 2015, when eastern Ghouta was under intense government bombardment, Alloush ordered members of Assad’s Alawite minority confined to cages in public areas and markets, using them as human shields to try to prevent further airstrikes, and drove the captives around Ghouta in cages placed on trucks. Alloush was killed in an airstrike in eastern Ghouta on Christmas Day 2015 that was blamed on Russia.

Abu Ammar Dalwan, the Army of Islam’s political chief, vowed in an interview with The Associated Press to fight until the end. “We will not negotiate to leave Ghouta,” he said.

The Army of Islam is taking part in U.N.-sponsored peace talks in Geneva, as well as negotiations in the Kazakh capital of Astana sponsored by Russia, Iran and Turkey.

Failaq al-Rahman, or Al-Rahman Corps, is the second-largest rebel group in eastern Ghouta after Army of Islam. Backed by Turkey and Qatar, it controls most of the central parts of the region, including the towns of Arbeen, Kfar Batna, Saqba and Hammouriyeh, which have been among the hardest hit in recent fighting. The group also controls parts of the Damascus neighborhood of Jobar.

The group has about 8,000 fighters, the vast majority of them from eastern Ghouta. Like the Army of Islam, it is well-armed, and a video released recently showed it has primitive factories that produce mortar shells and rocket-propelled-grenades.

The group’s military commander, Abdul-Nasser Shmeir, is a former captain of the Syrian army. The group is also taking part in the peace talks in Geneva and Astana.

Ahrar al-Sham has been involved in deadly battles against fighters of the al-Qaida-linked Levant Liberation Committee in the northern province of Idlib and Aleppo.

Although at the start of their rise the group adopted an extreme ideology, now it markets itself as a moderate rebel group. In eastern Ghouta, it has a strong presence in the Damascus suburb of Harasta and nearby areas.

Months after the uprising against Assad’s government began in March 2011, Ahrar al-Sham was founded by several Islamists, including Mohammed Baheya, who had links to al-Qaida leader Ayman al-Zawahri. Baheya reportedly fought against U.S. troops in Afghanistan and Iraq.

Baheya was killed in a suicide bombing in 2014 while trying to mediate between the Islamic State group and the al-Qaida-linked Nusra Front. Ahrar al-Sham survived its most serious blow in September 2014, when an explosion in Idlib province killed some of its top figures, including its leader, Hassane Abboud.

The Levant Liberation Committee rejects any peace talks with the government and because of its ties to al-Qaida is considered a terror organization by the United Nations.

It has about 600 fighters in eastern Ghouta, a small number compared to the estimated 20,000 rebel fighters in the area.

Since the end of 2017, there have been on-and-off negotiations to try to evacuate the al-Qaida-linked fighters and their families from eastern Ghouta, but the rebels say Assad’s government has frustrated all such attempts as a pretext to keep attacking the area.