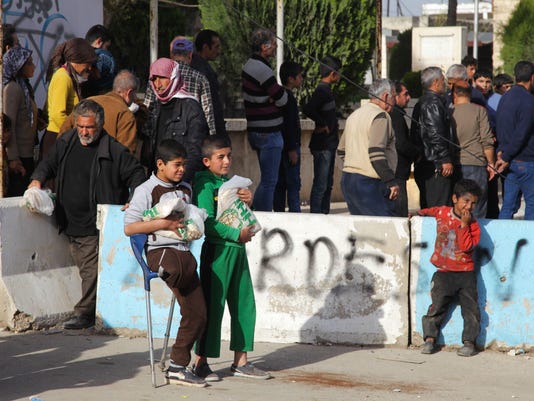 Beirut – Hundreds of armed rebels and civilians will begin evacuating a besieged town in eastern Ghouta, a rebel spokesman and Syrian government media reported Wednesday, in the first instance of fighters leaving the opposition stronghold east of the capital following a deal reached with the government.

Monther Fares, a spokesman for the powerful Ahrar al-Sham group, said the deal involves the departure starting Thursday morning of opposition fighters from his group to northern Syria. He said the deal negotiated with the government gives security guarantees for those who decide to stay in the town after the government takes over.

The Syria-controlled Military Media Center said 1,500 armed rebels and 6,000 civilians will evacuate Harasta on Thursday to the northern province of Idlib as part of a negotiated deal. The Ahrar al-Sham group, headquartered in Harasta, is the smallest of the rebel groups that control eastern Ghouta.

It is the first such deal involving the evacuation of opposition fighters from eastern Ghouta, which has been under a ferocious government air and ground assault for a month.

Fares said rebels have agreed to leave because of “civilian pressure” resulting from intensive airstrikes and “warplanes that do not leave the sky,” adding that residents of Harasta have spent the last three months inside shelters. He said Russia, a military backer of President Bashar Assad, was the guarantor of the deal.

In other parts of Syria, government forces have also pressed the rebels to enter into local cease-fire agreements under which the militants and their families would relocate to other parts of the country. The Syrian opposition has criticized such agreements, saying they reward the government’s siege tactics and legitimize the forced displacement of civilians from their homes.

Syrian government forces have chipped away at the sprawling rebel enclave of eastern Ghouta, seizing more than 70 percent of the territory since Feb. 18. The assault has displaced 45,000 people. Before the latest offensive, it was estimated that 400,000 people were trapped in the besieged region.