A quest in Yemen to fight famine

Some 400,000 children are fighting for their lives in the direst state of hunger in Yemen.

A quest in Yemen to fight famine 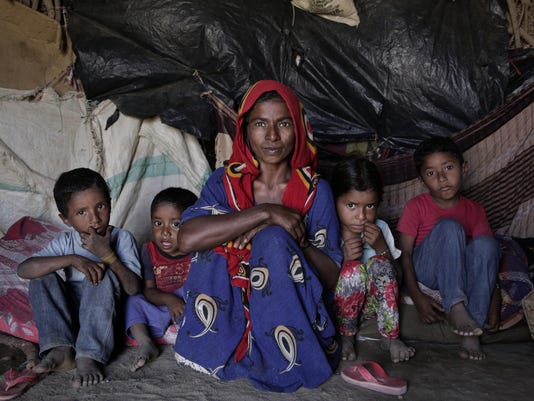 In this Feb. 10, 2018 photo, Fatma Halabi, the mother of Fadl an 8-month-old who recently died from severe malnutrition, sits with her children in their hut, in Wadi al-Kabeer, Mocha, Yemen. Fadl was born in the wilderness. His mother, Halabi, was eight months pregnant when she and thousands of others fled the area around her tiny village of Mowza as government forces descended on the Houthis.(Photo: Nariman El-Mofty / AP)

Mocha, Yemen – The young mother stepped onto the scale for the doctor. Even with all her black robes on, she weighed only 84 pounds – 38 kilograms. Umm Mizrah is pregnant, but starving herself to feed her children.

And her sacrifice may not be enough to save them.

The doctor’s office is covered with dozens of pictures of emaciated babies who have come through Al-Sadaqa Hospital in Aden, casualties of a three-year war in Yemen that has left millions of people on the edge of famine.

Mothers like Umm Mizrah are often the only defense against the hunger that has killed thousands. They skip meals, they sleep to escape the gnawing in their stomachs. They hide bony faces and emaciated bodies in voluminous black abaya robes and veils.

Three years into a civil war, Yemen is starving and could soon start to see widespread death from famine. Houthi rebels hold the country’s north, and a Saudi-led coalition, armed and backed by the United States, has sought to bomb the rebels into submission with a relentless air campaign in support of the Yemeni government.

Some 400,000 children are fighting for their lives in the direst state of hunger, severe acute malnutrition – the stage of swollen bellies and twig-like arms that are signs the body is eating away at itself for lack of nutrients and protein. In Yemen, around 2.9 million women and children are acutely malnourished, a stage of starvation just short of severe.

Halabi recalled the life before the war in the western district of Mowza, near Yemen’s Red Sea coast. In those days, the family had fish and vegetables often. Her husband, a woodcutter, could make the equivalent of $4 a day.

Mowza was in the hands of Houthi rebels for most of the war. Last year, government forces descended on the area to drive the rebels out. The fighting and airstrikes sent people fleeing, some of them scattering across the Great Valley.

Separated from her husband, Halabi led her four children and two goats across the Great Valley, the arid plain spilling down from the mountains toward the city of Mocha on the Red Sea.

These desolate stretches are historically a site of death. More than 400 years ago, a Muslim ruler forcibly sent almost the entire Jewish population of Yemen here for refusing to convert. Chroniclers say two thirds of them died in the heat and deprivation.

Halabi and the children hid in thorn bushes to avoid artillery and airstrikes along the shifting front line. One day in April last year, she went into labor and, alone, gave birth to Fadl under a tree.

Eventually, she and her husband reunited and settled in an abandoned hut in the valley.

Speaking from inside her makeshift home in February, Halabi sat with a rope cinched around her emaciated waist, even as her blue robe kept sliding off her bony shoulder.

She spoke in short, exhausted sentences. When asked what she had eaten that day, she said, “Bor,” the local Arabic word for flour. “We stay patient,” she said. “We have to feed the children.” When she gets hungry, she lies down and tries to sleep.

Often she and her husband eat one meal in the morning, and nothing again until the next day.

Unable to breastfeed Fadl, she gave him goat or camel milk, which lack the nutrients of breast milk or formula. The newborn kept getting fever and diarrhea, so she repeatedly borrowed money to take him to the hospital in Mocha.

The hospital has seen 600 malnutrition cases within 10 months, but is so short on supplies it doesn’t even have pain relievers for headaches, said one doctor, Abdel-Rehim Ahmed. It has no therapeutic feeding center. None of its doctors have been trained in treating malnutrition.

Fadl’s last visit to the hospital was Nov. 29. At eight months old, he weighed 2.9 kilograms (6 pounds), a third of the normal weight. The circumference of his upper arm, a common measure for malnutrition, was 7 centimeters, less than 3 inches.

Unable to pay for a hospital stay, Fadl’s parents took him home.

He gave his last breath not long after in the arms of his grandmother. His exhausted parents were asleep on the floor. The grandmother woke them and told them their boy was dead.