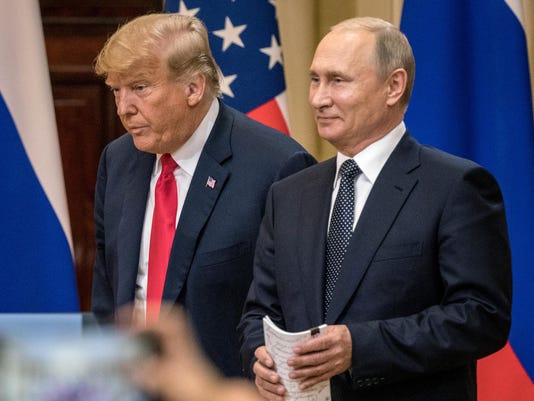 Washington – Rarely has an RSVP been so complicated.

President Donald Trump is open to visiting Moscow – if he gets a formal invitation from Vladimir Putin, the White House said Friday. Russian President Putin said he’s game for a trip to Washington – but his answer came only after Trump retracted his invitation for a fall sit-down.

The awkward back and forth is the latest round of summit drama flowing from the two leaders’ controversial first meeting in Helsinki this month. It underscores Trump’s eagerness to forge a warmer relationship with Putin, though the Russian does not appear to share the urgency and Trump’s allies in Washington are watching with frustration.

Trump’s tentative yes to a Moscow trip comes even as lawmakers are still pushing for details about what he and Putin discussed in Helsinki. The president has been widely criticized for failing to publicly denounce Russia’s interference in the 2016 U.S. election and appearing to accept Putin’s denials of such activity.

Trump’s response to the criticism – an abruptly announced invitation for a second meeting in Washington in the fall – got an ice-cold reception from Republicans in Congress facing tough elections in November. Moscow was lukewarm and did not immediately accept.

Then National Security Adviser John Bolton said Wednesday that plans for a fall visit would be delayed until 2019. He cited special counsel Robert Mueller’s investigation into Russian election meddling as the reason, using Trump’s favorite term for the probe: “witch hunt.”

But the possibility of a Trump trip to Moscow emerged Friday after Putin said he was ready to invite Trump – or to visit Washington if conditions are right.

“I understand very well what President Trump said: He has the wish to conduct further meetings,” Putin said while traveling in Johannesburg. “I am ready for this. We are ready to invite President Trump to Moscow. By the way, he has such an invitation, I told him of this. I am prepared to go to Washington, but, I repeat, if the appropriate conditions for work are created.”

White House press secretary Sarah Huckabee Sanders responded that Trump “looks forward to having President Putin to Washington after the first of the year, and he is open to visiting Moscow upon receiving a reciprocal formal invitation.”

But it’s just talk at this point.

It’s part of “a power game between Putin and Trump,” said Dr. Alina Polyakova of the Brookings Institution. She said the Kremlin basically drove the entire process in Helsinki, and “we’re seeing that again now.”

Trump is hardly in a strong position because “the Helsinki summit was such a fiasco,” said James Goldgeier of the Council on Foreign Relations.

A Putin visit to Washington between now and January “could have a lot of poor optics,” he said, and “it’s really hard to see the upside” of a Trump trip to Moscow.

The spectacle of Trump in the Russian capital – the site of unproven salacious allegations in an anti-Trump dossier compiled by a former British spy – was likely to raise eyebrows and alarm on Capitol Hill.

Just two days earlier, lawmakers from both political parties unsuccessfully demanded details of the Helsinki meeting from Secretary of State Mike Pompeo, who stonewalled nearly all those inquiries at a contentious hearing by maintaining that the president has a right to private conversations.

Since Helsinki, Trump has tried to walk back at least some of his comments. And Pompeo told the Senate Foreign Relations Committee that despite Trump’s public statements that allegations of Russian interference are “a hoax” he accepts that Russia did meddle in the 2016 election.

Trump was meeting Friday with his national security team to discuss threats to the 2018 congressional midterm elections, the first such session he has convened amid warnings from intelligence officials that Russia is again intent on interfering in the U.S. democratic process.

Republican lawmakers have made it clear they are not eager to see Putin, who intelligence officials say was aware of the 2016 interference, just weeks before Election Day 2018.

Putin “will not be welcome” at the Capitol, Senate Majority Leader Mitch McConnell told reporters.

The Republican leaders appear to be increasingly relying on public signals, rather than private phone calls or Oval Office chats, to catch the White House’s attention and communicate with Trump – especially when they are at odds with the president’s approach or policies.

Ryan has said he did not speak to the president in the days after the Helsinki summit.

Moscow has portrayed its tensions with Washington as a result of Trump being hobbled by domestic political disputes and a widespread “Russophobia” perpetrated by holdovers from the Obama years - echoing Trump’s penchant to blame his predecessor for many problems.

By saying that he’s willing to go to Washington if conditions are “appropriate,” Putin underlines that stance and effectively puts pressure on Trump to try to stamp out opposition. His invitation for Trump to come to Moscow - whether the invitation has been formally tendered or is only in spirit - also appears to pressure Trump to show whether he is bold and disruptive enough to buck intense criticism at home.