Windsor lights up in celebration of legal marijuana

Windsor lights up in celebration of legal marijuana 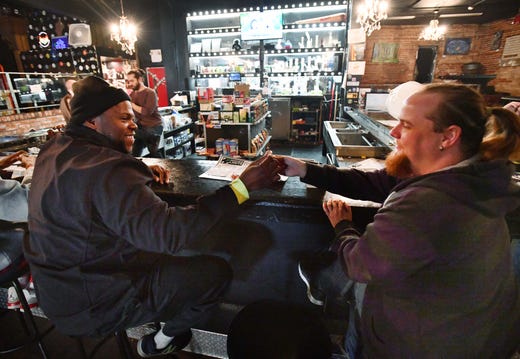 Detroiter Jamal Williams, left, and Windsor resident Kel Meisner share a marijuana cigarette during a visit to Higher Limits Cannabis Lounge, where customers can bring in cannabis and smoke, but is not a dispensary, in Windsor, Ontario, on Wednesday, Oct. 17, 2018. Canada became the largest country with a legal national marijuana marketplace as sales began early Wednesday. Daniel Mears, The Detroit News
Fullscreen 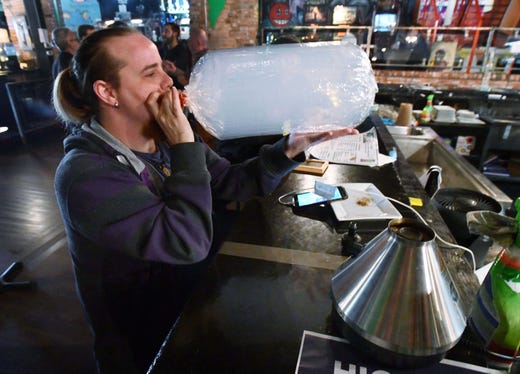 Windsor resident Kel Meisner, who says he smokes to ease the pain of fibromyalgia, inhales using a volcano, which heats marijuana instead of burning it, at Higher Limits Cannabis Lounge Wednesday in Windsor. Daniel Mears, The Detroit News
Fullscreen 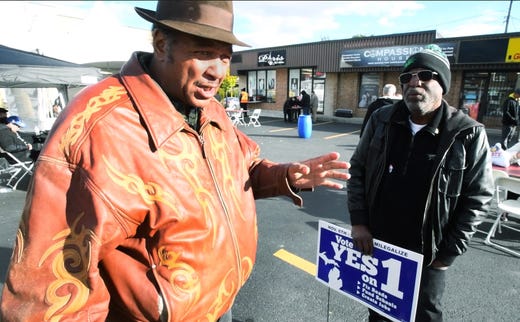 Detroit residents George Cushingberry Jr. and Richard Clement, who both support Michigan's Proposal 1 in the upcoming election, attend an event celebrating the legalization of marijuana in Canada in front of Compassion House in Windsor on Thursday. Cushingberry Jr., a former Detroit City Council member, comments, "Justin Trudeau really proved something today because he kept his word and he went totally legalized and the first action that he took was to eliminate all those regs which is what we need to do in Michigan after we pass the law." Richard Clement adds, "Yes on one to get the job done. Daniel Mears, The Detroit News
Fullscreen 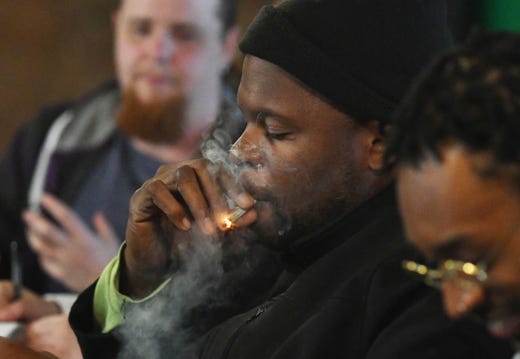 Detroiter Jamal Williams smokes a marijuana cigarette during a visit to Higher Limits Cannabis Lounge, where customers can bring in cannabis and smoke it, but is not a dispensary, Wednesday in Windsor. Daniel Mears, The Detroit News
Fullscreen 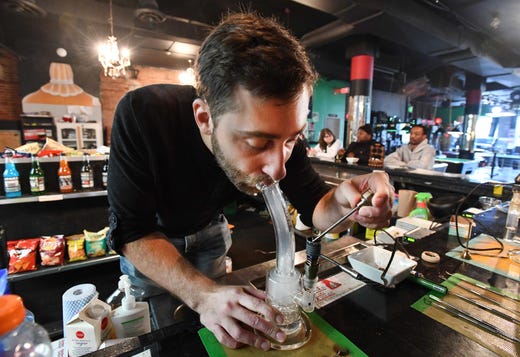 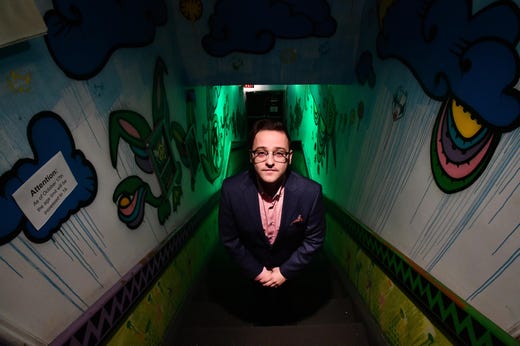 Jon Lietke founded Higher Limits Cannabis Lounge, where customers can bring cannabis in and smoke it, but is not a dispensary, in Windsor. Daniel Mears, The Detroit News
Fullscreen 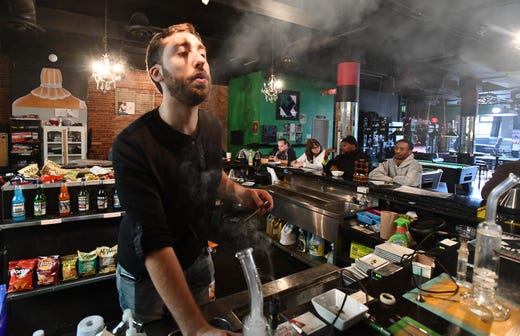 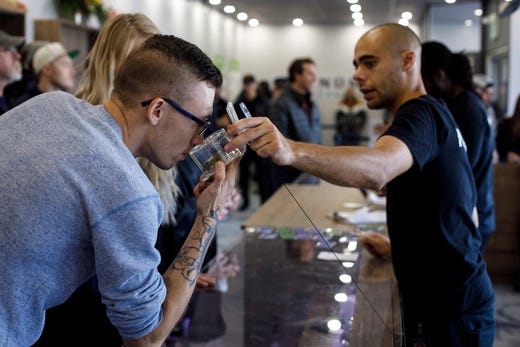 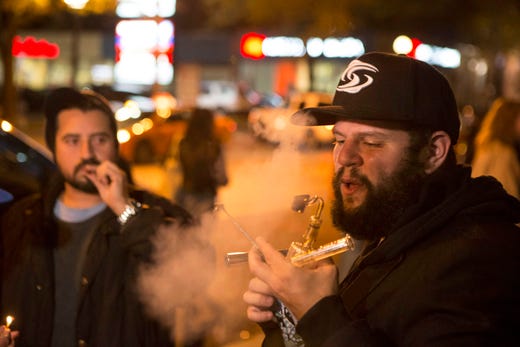 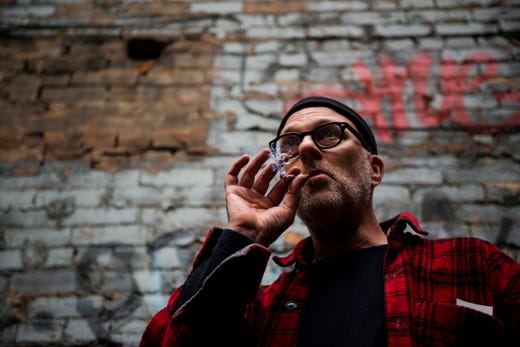 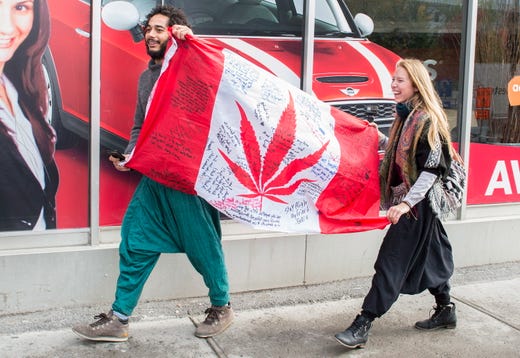 People hold up a Canadian flag with a marijuana logo on it outside a government cannabis store in Montreal, Wednesday, Oct. 17, 2018. Canada became the largest country with a legal national marijuana marketplace as sales began early Wednesday. Graham Hughes, AP
Fullscreen 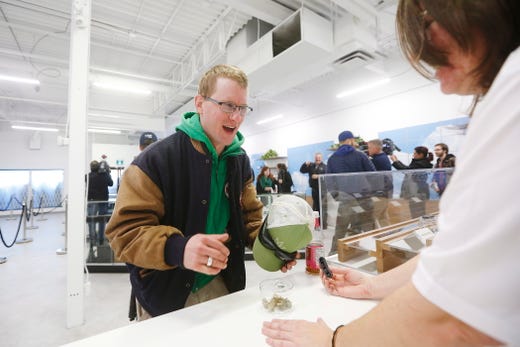 Steven Stairs, a cannabis activist and who camped overnight, reacts after sniffing some cannabis at the sample counter as he prepares buy his marijuana in Winnipeg, Manitoba, Wednesday, Oct. 17, 2018. Canada became the largest country with a legal national marijuana marketplace as sales began early Wednesday. John Woods, AP
Fullscreen 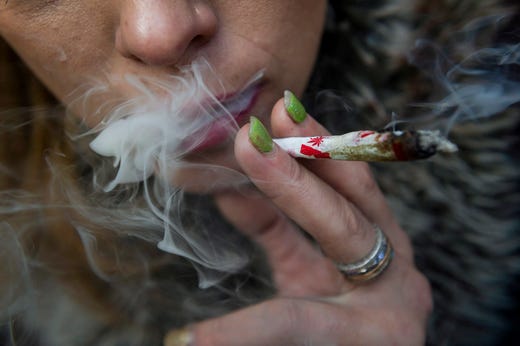 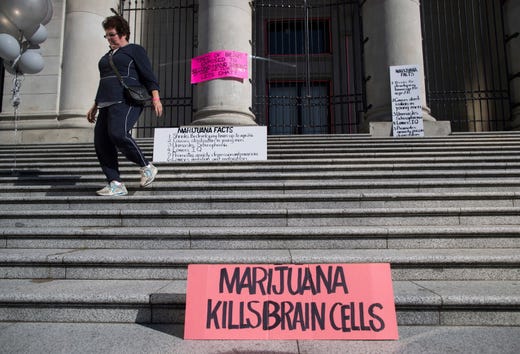 A woman who was part of a protest about the dangers of marijuana walks away after moving a sign in Vancouver, on Wednesday, Oct. 17, 2018. Canada became the largest country with a legal national marijuana marketplace as sales began early Wednesday. Darryl Dyck, AP
Fullscreen 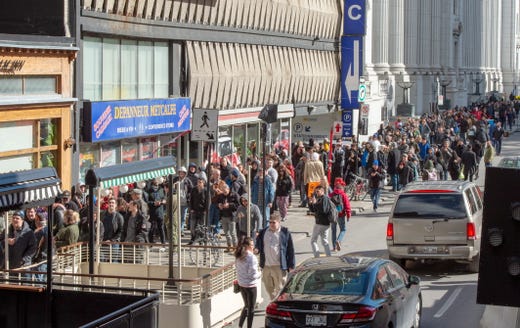 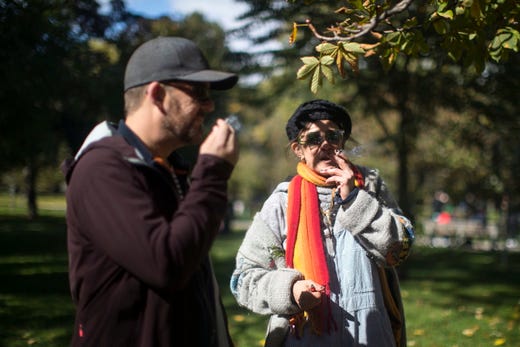 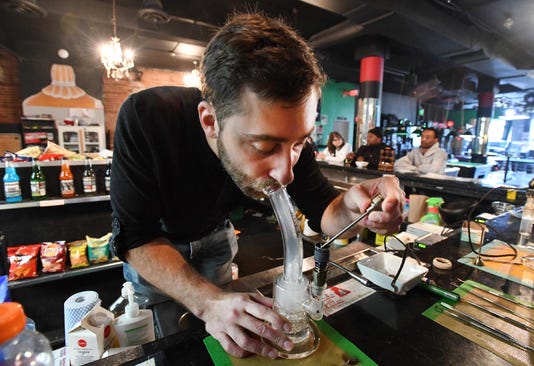 Windsor — Spirits were high Wednesday as hundreds passed through the doors of medical marijuana lounges near the city's downtown. Celebratory music blared from outside one parking lot as some hawked T-shirts to mark the moment.

Canada on Wednesday replaced the maple with the marijuana leaf as it became the first industrialized nation to legalize recreational pot.

“We’re celebrating,” said Jon Liedtke of Higher Limits Cannabis Lounge, as a guest smoked at the bar stocked with Arizona teas and such munchies as Twinkies, Pop-Tarts and Rice Krispies. “The more people that can use cannabis, the better."

A law passed by the country’s government in June went into effect Wednesday, and it comes just ahead of a November ballot proposal in Michigan that would also legalize the drug for recreational use.

The law in Ontario allows people 19 years or older to use cannabis and purchase up to 30 grams of it. Consumers are expected to purchase marijuana from retailers regulated by provinces or territories or from federally licensed producers. Ontario has delayed allowing most pot shops to open until April 1, though people can purchase it online in the interim. 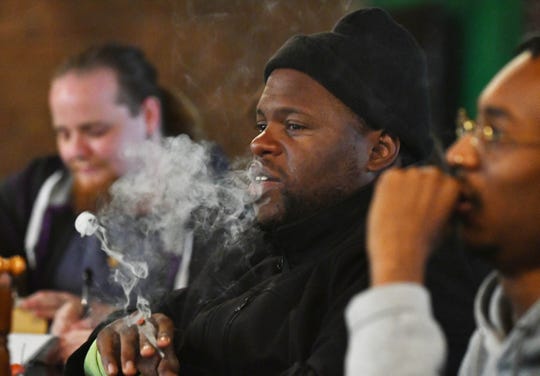 Detroit resident Jamal Williams smokes a marijuana cigarette during a visit to the Higher Limits Cannabis Lounge in Windsor, Ontario, Wednesday. Customers can bring in marijuana and smoke it, but the lounge is not a dispensary. (Photo: Daniel Mears, The Detroit News)

More than 500 people passed through the door of Compassion House. Wednesday was its opening. The pot shop was selling marijuana at $10 per gram, including a 23 percent tax, to those with medical licenses.

"(Prime Minister) Justin Trudeau really proved something today because he kept his word and he totally legalized,” Cushingberry said. “And the first action that he took was to eliminate all those regs, which is what we need to do in Michigan after we pass the law."

Compassion House owner Leo Lucier said he plans to make his business a dispensary for recreational users in April, too. For now, though, he sees it playing a role in educating his fellow citizens.

“The Canadian government legalized marijuana before they educated the people,” Lucier said. “They’re struggling, and the laws are a big mess. No one knows what they are. It’s up to us to educate.”

It is not just Canadians who need educating, though. Lucier said he also expects tourists from the United States to come north to get their fix.

U.S. Customs and Border Protection officials on Wednesday reiterated that marijuana remains illegal under U.S. federal law and that those who are caught at the border with pot are subject to arrest and prosecution.

"Nothing changes. It is illegal to possess, sell and distribute marijuana in the United States. Federal law will not change," said Christopher Perry, director of field operations for the U.S. Customs and Border Protection in Michigan. "Federal law supersedes state law."

For Joe Merheje, a 29-year-old tequila bar owner, recreational marijuana means money in his pocket and for the community.

“It’s cool for the downtown area,” he said. “I think it’ll bring over the Americans. It’ll increase the traffic and bring in more money. I think we’ll see more businesses open up.”

Some already have. Higher Limits Cannabis Lounge opened two and a half years ago, serving as a hangout place for more than 125,000 medical pot users from Canada as well as Michigan, Ohio and other Midwest states. Charging a $5 cover fee, the 6,000-square-foot lounge offers a place for people to sit, talk and play arcade and board games while they smoke.

Liedtke, its founder, said the lounge increased the age for guests from 18 to 19 on Wednesday to keep admission simple. Liedtke says he and his business partners are evaluating becoming a dispensary, but for now, he hopes to reap the benefits of what Deloitte estimates will be a $4 billion industry in Canada.

“This is a place for people to come, hang out and smoke a bong if they would like," he said. "We want to destigmatize cannabis usage. So many have felt the benefits of it.”

Kell Meisner, 32, of Windsor said as a farm hand, marijuana has helped him over the past six years with the pain that comes from lifting and lugging. Meisner said he is excited about the legalization because it will make it easier to buy cannabis. In the past, he has purchased online and on the street.

“I’m glad that I can be confident and know what I’m getting because it’s been quality tested,” Meisner said. “I know what I can take before going to work and what I should take afterward because it will knock me on my butt.”

Although supporters of cannabis legalization in Canada touted the positives for the economy and crime rates, others expressed concern over safety on the roads, in the workplace and for children.

Chris Waters of Windsor said he sees legalization as an extension of the “vice economy” that has been a part of the Detroit-Windsor border speckled with casinos and bars.

“It brings marijuana use into the light, which I think is a good thing,” said the 49-year-old lawyer. “I think we’ll see a reduction in organized crime. I’m not sure I see it as any worse than alcohol.”

Although Americans might cross the border to use the drug legally, Alexandra Carmen, a 21-year-old university student in Windsor, said it also may cause problems for those looking to travel the other way. It is illegal to take marijuana out of the country, even for those traveling to places where it is legal.

“Canadians will be more at risk,” she said. “They’ll have more at stake. It’ll affect their ability to cross our border safely.”

It also could put jobs at risk, too. That is what worries Lyn Caine, a 49-year-old job development program lead. She attended a discussion on Wednesday with her company’s human resources department and managers about the implications of the law change.

“The Big Three have a large presence here,” Caine said. “I’m worried mostly for what legalization will mean for those in the skilled trades, those who are using equipment and machines.”

Many other Windsor residents, however, had another machine on their minds: cars. Several people expressed concerns over people driving under the influence. In Ontario, those who use marijuana while driving can have their license suspended or car impounded, be fined or even receive jail time.

“Legalization makes it easier to access it,” said Scherles He, a 26-year-old graduate student in Windsor. “People will drive after using it. That’s very dangerous.”

In Gene Locknick’s view, though, “sin always pays.” He referenced the 1920s prohibition era when many people continued to drink, despite it being outlawed.