Causing an uproar: Lion-car combo the latest in selfie bling

Causing an uproar: Lion-car combo the latest in selfie bling 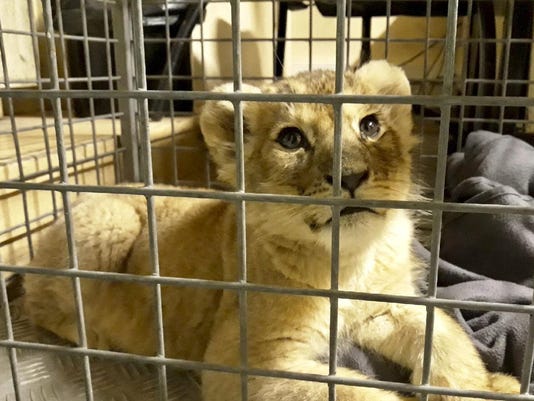 Paris – When Paris police officers found a lion cub in a Lamborghini during a traffic stop this week, they exposed the tip of what animal campaigners say is a bizarre and disturbing new trend: People buying or renting cubs to take bling-bling selfie photos of themselves with a baby big cat.

The male cub , named Putin but known as Dadou, is less than two months old and likely would have died of poor care had police not stopped the luxury sports car Monday on the Champs-Elysees and rescued the cat, according to 30 Million Friends, the French animal protection NGO now caring for it.

“There are hundreds of babies going around like this illegally,” the group’s president, Reha Hutin, said in an Associated Press interview Wednesday. “You can buy a cub for less than a dog. It costs 300 euros (340 dollars) and so they buy them off circuses.”

“It’s really a disaster,” she said. “They get these babies and they take selfies with them on social media.”

Hutin believes the fad spread to France from Gulf countries.

Wealthy people in the Gulf pose with baby cubs and “take photographs of themselves in the car,” she said. “Once they grow up they’re just thrown out.”

The NGO works with a sanctuary in Jordan that already houses 30-40 abandoned wild cats.

“What’s terrible (is) it’s coming to France. We’ve literally saved four babies in the last six months because they are copying those guys,” Hutin said. “Like, ‘Look at me, look how special I am.’ That’s become a real fashion.”

Not just in France. Another lion cub is adjusting to life in a Dutch big cat center after a jogger ran into it last month in a cage dumped in a field in the central Netherlands.

The NGO is suing the driver of the sports car, who was taken into custody after police found the cub. Paris police confirmed the find and the arrest. Sports cars are often offered for hire on the Champs-Elysees, for tourists to take short, high-adrenaline rides on the famous avenue and surrounding streets.

In a separate case brought by 30 Million Friends, a French court handed a 6-month jail term to another person found with a lion cub, Hutin said.

“We were very happy to get that. Maybe it will dissuade the others,” she said.

The Lamborghini cub is the third recovered by 30 Million Friends in a month and the sixth wild cat in under a year. One, a small lioness, was found by the customs brigade in a cage in a garage in the southern French port city of Marseille .

The NGO is calling for beefed-up government measures against the trafficking of wild animals and their use in French circuses.

“It’s the circuses that are breeding them, to have all these new cubs,” Hutin said. “That’s how these babies, these cubs, are found on (the) Internet … It’s really become a huge problem.”

The Lamborghini cub is basically fine, although a health check by a vet found that it was in a weakened state, has a problem with one of its back paws and a broken tail, 30 Million Friends said.

The cub is now in quarantine in a big cat wildlife park east of Paris and will later join the two cubs recovered by 30 Million Friends in October. The three will probably then be sent to a large park in South Africa, joining three other lions rescued previously in France.

“We have this plan to regroup them and really have a family,” Hutin said. “We’ll sort of have this little group of six babies, Parisian babies.”