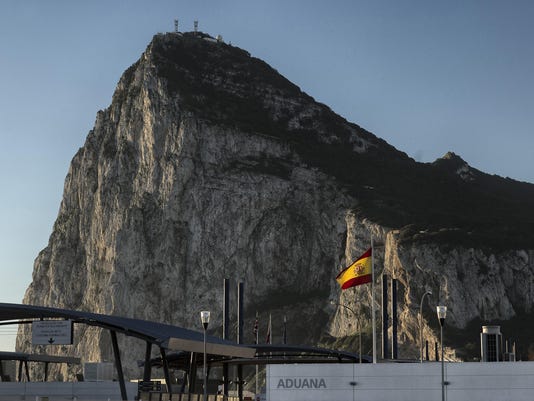 In this file photo, a Spanish flag flies on top of the customs house on the Spanish side of the border between Spain and the British overseas territory of Gibraltar with the Rock as a background, in La Linea de la Concepcion, Southern Spain. Spanish Prime Minister Pedro Sanchez said in a press conference on Nov. 21, 2018, that his government is "annoyed" that the divorce agreement being prepared for Britain's exit from the European Union doesn't specify that Gibraltar's future must be decided directly by officials in Madrid and London.(Photo: Daniel Ochoa de Olza / AP)

London – European Union diplomats were meeting Friday to finalize the draft divorce agreement between Britain and the bloc, amid a warning from Spain that it will oppose the deal if it isn’t guaranteed a say over the future of Gibraltar.

Leaders of EU nations are due to meet Sunday to sign off on the deal, which lays out the terms of Britain’s departure in March and sets up a framework for future relations. But Spain remains unsatisfied.

Spanish Prime Minister Pedro Sanchez tweeted that Britain and Spain “remain far away” on the issue and “if there are no changes, we will veto Brexit.”

Spain wants the future of the tiny territory at the tip of the Iberian Peninsula – ceded to Britain in 1713 but still claimed by Spain – to be a bilateral issue between Madrid and London. Spanish officials are concerned that a key clause in the agreement referring to U.K.-EU negotiations on their future relationship makes no mention of Gibraltar.

Spain doesn’t have a veto on the withdrawal agreement, which does not have to be approved unanimously. But it could hold up a future free-trade deal between Britain and the EU, which would require approval of all 27 EU nations.

A Spanish government official said the dispute over Gibraltar could be resolved by modifying a single clause in the divorce agreement – though both Britain and the EU have said the agreement won’t be amended.

Spain’s junior minister for the EU, Luis Marco Aguiriano, said Friday that officials could tweak article 184 to make it clear that future relations between the EU and Gibraltar “will be negotiated with the U.K. with Spain’s prior consent.”

He said in an interview with Spain’s Onda Cero radio station that officials in Brussels were working on options to accommodate Spain’s concerns about Gibraltar, and estimated there was a 60 percent chance of success.

Chief Minister of Gibraltar Fabian Picardo criticized Spain’s insistence on a written guarantee, saying “Gibraltar has demonstrated that we actually want a direct engagement with Spain on issues.”

“Spain is the physical and geographical gateway to Europe for Gibraltar,” Picardo told the BBC. “We recognize that and there is absolutely no need for us to be vetoed into being brought to the table.”

Chancellor Angela Merkel’s spokesman said Germany believed outstanding questions would be cleared up in time for Sunday’s summit to go ahead.

“We assume that open questions can be cleared up by Sunday,” spokesman Steffen Seibert said. “That is being worked on intensively, so the chancellor is preparing for the trip to Brussels.”

If EU leaders rubber-stamp the deal, it needs to be approved by the European and British Parliaments – a tough task for British Prime Minister Theresa May, whose Conservatives lack a majority in the House of Commons.

May was answering calls on a radio phone-in Friday in a bid to win public support for the divorce deal, which has been slammed by pro-Brexit and pro-EU politicians alike.

Brexiteers think the agreement will leave the U.K. tied too closely to EU rules, while pro-Europeans say it will erect new barriers between Britain and the bloc – its neighbor and biggest trading partner.

Geir Moulson in Berlin contributed to this story.