Aid efforts ramp up in wake of deadly tsunami

At least 280 people were killed, more than 1,000 were injured in second such disaster to hit Asian nation this year

Aid efforts ramp up in wake of deadly tsunami 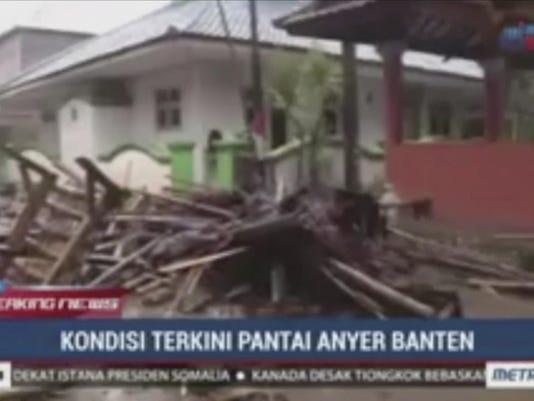 In this image made from video, debris are seen on street after a tsunami hit the coast in Serang city, in Banten Province, Indonesia, Sunday, Dec. 23, 2018. A tsunami apparently caused by undersea landslides from a volcanic island hit the coast around Indonesia's Sunda Strait, the government reported.(Photo: METRO TV)

Tanjung Lesung, Indonesia — Doctors worked to help survivors and hundreds of people searched on debris-strewn beaches for more victims Monday from a deadly tsunami that smashed into houses, hotels and other buildings without warning in the darkness along an Indonesian strait.

The waves that swept terrified people into the sea Saturday night along the Sunda Strait followed an eruption and possible landslide on Anak Krakatau, one of the world’s most infamous volcanic islands.

At least 280 people were killed, more than 1,000 were injured, and dozens have been reported missing from the disaster areas along the coastlines of western Java and southern Sumatra islands. The death toll could increase once authorities hear from all stricken areas.

The Indonesian Medical Association says it is sending more doctors and medical equipment and that many of the injured are in need of orthopedic and neurosurgery expertise. It says most patients are domestic tourists who were visiting the beach during the long holiday weekend.

It was the second deadly tsunami to hit Indonesia this year, but the one that struck the island of Sulawesi on Sept. 28 was accompanied by a powerful earthquake that gave residents a brief warning before the waves struck.

On Saturday night, the ground did not shake beforehand to alert people to the oncoming wave that ripped buildings from their foundations in seconds and swept terrified concertgoers on a resort beach into the sea.

Disaster agency spokesman Sutopo Purwo Nugroho said late Sunday that 222 deaths had been confirmed and at least 843 people were injured.

The worst-affected area was the Pandeglang region of Java’s Banten province, which encompasses Ujung Kulon National Park and popular beaches, the agency said.

In the city of Bandar Lampung on Sumatra, hundreds of residents took refuge at the governor’s office, while at the popular resort area of Anyer beach on Java, some survivors wandered in the debris.