Iraq says it could deploy military into Syria

With the U.S. pulling out of Syria, it leaves its allies to fight the IS group alone

Iraq says it could deploy military into Syria 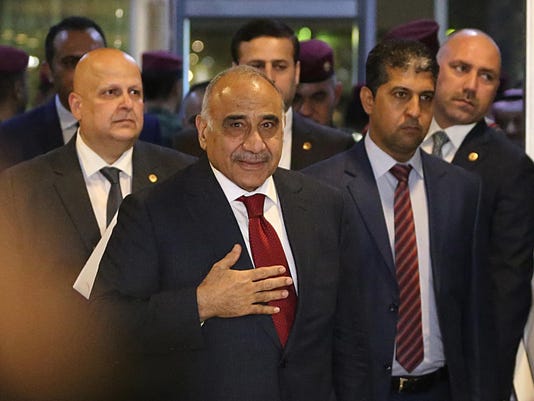 In this Oct. 24, 2018 file photo, then Prime Minister-designate Adel Abdul-Mahdi, center, arrives to the parliament building, in the heavily guarded Green Zone, in Baghdad, Iraq. Abdul-Mahdi told reporters at a press conference on Dec. 24, 2018, that his government could deploy troops inside Syria, in the latest fallout from the U.S. decision to withdraw from the war-torn country.(Photo: Hadi Mizban / AP)

Baghdad – Iraqi troops could deploy into neighboring Syria, Iraq’s prime minister said Monday, in the latest fallout from the U.S. decision to withdraw from the war-torn country.

Adel Abdul-Mahdi said his government was “considering all the options” to protect Iraq from threats across its borders, days after President Donald Trump announced the U.S. would leave Syria.

Iraq is keeping reinforcements along its frontier to guard against infiltration by Islamic State militants, who hold a pocket of territory along the Euphrates River.

With the U.S. pulling out of Syria, it leaves its allies, the Kurdish-led Syrian Democratic Forces, to fight the IS group alone.

It also leaves the SDF exposed to military action by Turkey, which says the group is linked to a Kurdish separatist organization operating within Turkish borders.

SDF officials warned they would divert resources away from the battle against IS to defend against Turkey, which is amassing forces along its frontier.

And the Syrian government could also step into the fray, analysts warned, if it sees the opportunity to bring the SDF-controlled northeast back under its rule.

Abdul-Mahdi, in a press conference Monday, said Iraq was concerned that IS could expand its footprint in the warzone. He also expressed concerns that a wave of Syrian refugees is being displaced to Iraq.

The prime minister spoke with U.S. Secretary of State Mike Pompeo about the U.S. withdrawal on Saturday. Abdul-Mahdi said his government did not receive a U.S. request to deploy inside Syria. But he said the possibility was “circulating.”

“Iraq will take its decisions in consultation with its friends and neighbors,” he said.

Iraq does not have any army forces inside Syria. But various Iranian-funded and trained militias, part of the Popular Mobilization Forces, are fighting inside Syria on behalf of the government. The PMF are part of Iraq’s national security apparatus, but have some autonomy in their operations.