A new caravan of migrants hope to reach the United States 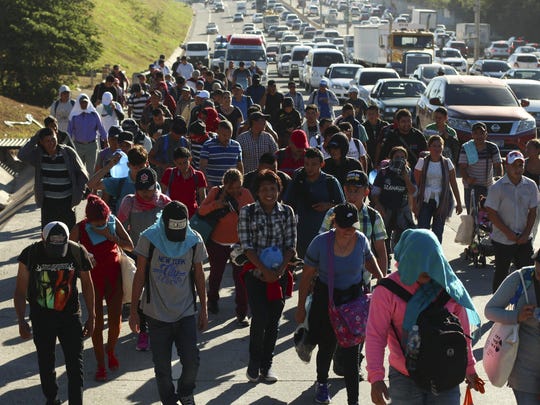 Agua Caliente, Guatemala – More than 1,000 Hondurans were walking and hitchhiking through Guatemala on Wednesday, heading toward the Mexico border as part of a new caravan of migrants hoping to reach the United States.

Guatemala’s migration authority said just over 1,300 people were able to register at the border and pass through frontier controls under the watchful eyes of about 200 police and soldiers at the Agua Caliente crossing. Some migrants told the Associated Press that they crossed informally elsewhere.

Miria Zelaya, who left the Honduran city of Colon and was traveling with 12 relatives, said she did not know what sort of work she hopes to find in the United States but was not dismayed by tougher immigration policies under President Donald Trump.

“That does not discourage me,” Zelaya said. “The need is greater.”

Many in the group registered for 90-day visas in Guatemala, saying they felt it would offer peace of mind on the 300-mile trek to Mexico’s southern border.

Hector Alvarado, a 25-year-old announcer, said he had been shut out of job opportunities for belonging to the political opposition and felt forced to leave to find work. He learned about the caravan on Facebook, said goodbye to relatives and hit the road.

“My loved ones have already cried over of my leaving,” Alvarado said. “Now I have to press on.”

The latest trek north comes as President Donald Trump has been working to convince the American public that there is a crisis at the southern border to justify construction of his long-promised border wall. Trump’s demand for billions of dollars to that end has resulted in a standoff with Congress that has forced a partial government shutdown.

The fate that awaits the migrants at the Mexico-U.S. border is uncertain. Previous caravans that were seized upon last year by Trump in the run-up to the 2018 midterm election have quietly dwindled, with many having gone home to Central America or put down roots in Mexico. Many others – nearly half, according to U.S. Border Patrol arrest records – have sought to enter the U.S. illegally.

About 6,000 Central Americans reached Tijuana in November amid conflict on both sides of the border over their presence in the Mexican city across from San Diego. As of earlier this week, fewer than 700 remained at a former outdoor concert venue in Tijuana that the Mexican government set up as a shelter to house them.

Mexico has issued humanitarian visas to about 2,900 migrants from last fall’s caravan, many of whom are now working legally there with visas.

Also Wednesday about 100 migrants set out as a group from the capital of El Salvador, hoping to join the larger group from Honduras. Their numbers represent less than a third of the estimated 350 migrants who leave El Salvador each day.

“I can’t stay. I’m leaving because the gangs have threatened me – either I join them, or they’ll kill me,” said Adonay Hernandez, 22, who was carrying just $20 in his pocket but was confident he will make it to relatives in North Carolina. “God is my shield.”

Others hoped to find a better life in Mexico, where they have options for applying for refuge and work permits.

“I know that in Mexico they are helping us,” said Franklin Martinez, a 34-year-old traveling with his partner and their 2½-year-old daughter. “We are going to ask for refuge and we are going to stay and work. After we have saved enough, perhaps we will go to the United States, but our goal is to make it to Mexico.”

Liduvina Margarin, vice minister for Salvadorans abroad, met with the migrants before they left a downtown plaza to warn them about the dangers of the northward route. She told them that more than half the Salvadorans who left in caravans have returned to the country.

“Our duty is to say to you that you are never going to be better off than in your homeland, in your communities of origin,” Margarin said.

He said the best option is for Central American governments to persuade their citizens to stay. Those who don’t will be allowed to enter Mexico in an orderly fashion and presented with options, and their human rights will be respected, Lopez Obrador added.