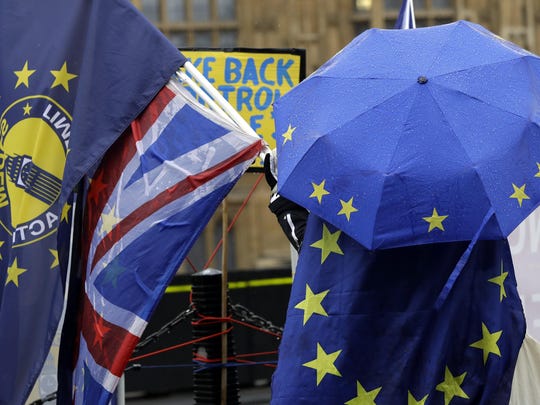 An anti-Brexit demonstrator shelters under an umbrella in the pattern of the European Union flag outside parliament in London, Jan. 24, 2019. (Photo: Kirsty Wigglesworth / AP)

London – Queen Elizabeth II has urged people to seek “common ground,” in remarks widely interpreted as a veiled criticism of the toxic debate surrounding Britain’s departure from the European Union.

While the monarch didn’t mention Brexit and is barred from commenting on political issues, the Times of London described the comments as a “rebuke to warring politicians.” Lawmakers on all sides of the increasingly tense Brexit debate have traded barbs in recent weeks as Prime Minister Theresa May tries to push ahead with the divorce deal she negotiated with EU leaders even though it has been overwhelmingly rejected by Parliament.

“Every generation faces fresh challenges and opportunities,” the monarch said Thursday in a speech marking the 100th anniversary of the Women’s Institute in Sandringham, home to one of the royal family’s country estates. “As we look for new answers in the modern age, I for one prefer the tried and tested recipes, like speaking well of each other and respecting different points of view; coming together to seek out the common ground; and never losing sight of the bigger picture.”

Even though she remains publicly neutral on political issues, the queen’s words are carefully watched as a moral bellwether.

While her remarks to the Women’s Institute were similar to those in the queen’s annual Christmas address, they come as May faces increasing pressure to rule out the possibility of leaving the EU without an agreement on future relations.

Work and Pensions Secretary Amber Rudd, a prominent supporter of the prime minister, said Thursday she was “committed to making sure we avoid no-deal,” which would have devastating effects on the British economy. A string of union bosses have been holding talks with May and are also urging her to take no-deal off the table.