The confirmed death toll rose to 58, with up to 300 people still missing, authorities said 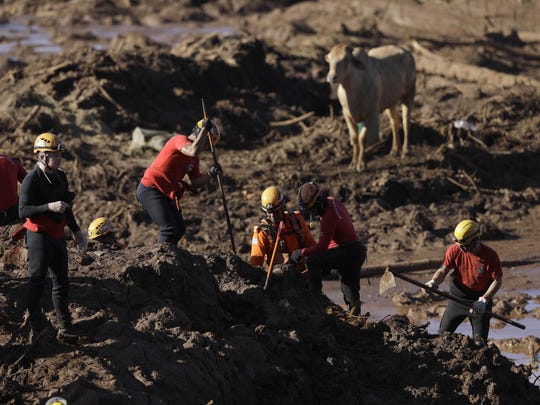 The confirmed death toll rose to 60, with 292 people still missing, according to the fire department in the southeastern state of Minas Gerais, where the dam is located.

In an ominous sign, no one was recovered alive Sunday, a stark difference from the first two days of the disaster, when helicopters whisked people out of the mud.

The death toll was expected to grow “exponentially” on Monday, the Minas Gerais fire department said.

Search efforts were extremely slow because of the treacherous sea of reddish-brown mud that surged out when the mine dam breached Friday afternoon. The mud was up 24 feet (8 meters) deep in some places, forcing searchers to carefully walk around the edges of the muck or slowly crawl onto so they would not sink and drown.

Rescue teams Monday morning focused their searches on areas where a but was immersed and the cafeteria of mining company Vale, where many workers were eating lunch when the dam ruptured. Vale SA’s is the world’s largest producer of iron ore, the raw ingredient for making steel. The Brazilian company’s American depository shares plunged 15.8 percent Monday on the New York Stock exchange.

At the scene of the disaster, helicopters looking for bodies took off and landed nonstop. On the ground, dozens of rescuers with tracking dogs were searching for bodies through the mountains of mud. The Associated Press witnessed a helicopter rescue of three bodies that arrived at the search center.

Rescue efforts were suspended for about 10 hours Sunday because of fears that a second mine dam in Brumadinho was at risk of failing. About 24,000 people were told to get to higher ground, but by afternoon civil engineers said the second dam no longer posed a risk.

Areas of water-soaked mud appeared to be drying out, which could help firefighters get to areas previously unreachable. Still, it was slow going for the search teams, residents were on edge and some started searching on their own for relatives.

Wagner Rogerio, 43, said he was looking for childhood friends but had no equipment or instructions how to do so.

“My family tells me I’m not a superhero and that I should go home. But the very least my friends deserve is a dignified burial,” he said with tears in his eyes.

Throughout the weekend, there was mounting anger at the giant Vale, which operated the mine, and questions rose about an apparent lack of a warning siren ahead of Friday’s collapse.

In an email, Vale told The Associated Press that the area has eight sirens, but “the speed in which the event happened made sounding an alarm impossible” when the dam burst.

Clamor for culpability was growing. Sen. Renan Calheiros called for Vale’s board of directors to step down and Attorney General Raquel Dodge told reporters that Vale executives could be held responsible.

Over the weekend, courts froze about $3 billion from Vale assets for state emergency services and told the company to report on how it would help victims.

According to Vale’s website, the waste is composed mostly of sand and is non-toxic. But a U.N. report found that the waste from a similar Brazil disaster in 2015 “contained high levels of toxic heavy metals.”

That dam by Vale and Australian mining company BHP Billiton collapsed in the city of Mariana in Minas Gerais, killing 19 people and forcing hundreds from their homes.

About 250,000 people were left without drinking water thousands of fish died. An estimated 60 million cubic meters of waste flooded nearby rivers and eventually flowed into the Atlantic Ocean.