More than 1,000 students from rival Christchurch schools and different religions came together to honor the 50 lives lost in a massacre

Students hold candles during a moment of silence as they gather for a vigil to commemorate victims of Friday's shooting, outside the Al Noor mosque in Christchurch. (Photo: Vincent Thian, AP)

Christchurch, New Zealand – They came together as one, more than 1,000 students from rival Christchurch schools and different religions, joining voices to honor the 50 lives lost in a massacre that has deeply wounded the cozy New Zealand city.

In a park across from the Al Noor mosque, where dozens were killed by a white supremacist gunman, the students sat on the grass in Monday’s fading daylight, lifting flickering candles to the sky as they sang a traditional Maori song.

Hundreds then stood to perform a passionate, defiant haka, the famed ceremonial dance of the indigenous Maori people.

For many, joining the vigil for the victims of the mass shooting was a much-needed opportunity to soothe their minds after a wrenching few days. 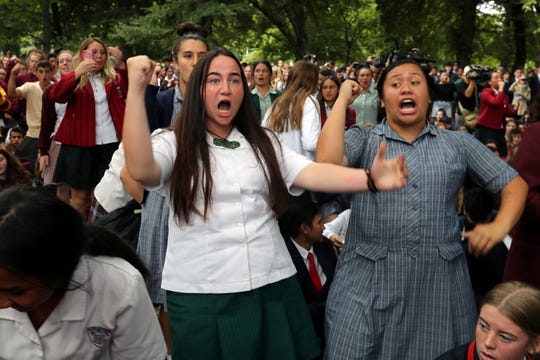 Most of the students spent hours locked down in their schools on Friday as police tried to determine if any other shooters were involved in the attacks.

Those at the vigil told harrowing tales of being forced to hide under classroom tables or on a school stage behind a curtain, of being instructed not to speak, and to urinate in a bucket rather than risk leaving the classroom for a bathroom.

Sarah Liddell, 17, said many of her peers felt intense anxiety since the attack. There was a sense of safety in coming together on Monday, she said.

“I feel like it’s just really important to show everyone that one act of violence doesn’t define a whole city,” she said. “This is one of the best ways to show everyone coming together. Some schools have little funny rivalries, but in times like this we all just come together and that’s all forgotten.” 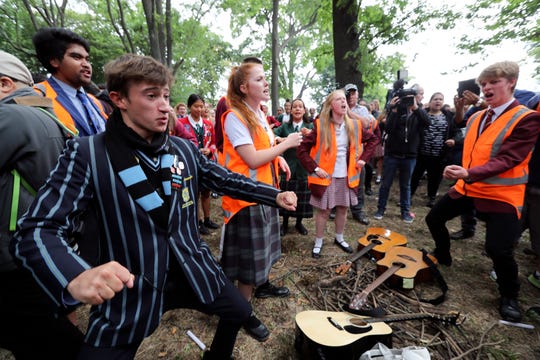 Students perform the Haka during a vigil to commemorate victims of Friday's shooting, outside the Al Noor mosque in Christchurch on Monday, March 18, 2019. (Photo: Vincent Thian, AP)

The students draped a fence along the park with chains of colorful paper notes, each emblazoned with messages of love and hope and sorrow: “You are not alone.” “This is your home. You are part of us.” “We all bleed the same colour.”

For 17-year-old Portia Raharaha, who attended the vigil with other students from her Catholic high school, watching the haka was particularly moving.

“All the races combining, all students, all ages, both genders, we’re all just coming together,” Raharaha said. “It definitely makes you feel like New Zealand really does come together in a time of darkness and we can really just be who we are,” she said. “Nothing has really changed. Maybe it’s shaken us, but it really hasn’t changed us.”

After the ceremony officially ended, many lingered, standing in circles, arms draped around each other’s shoulders, singing Leonard Cohen’s “Hallelujah” and Maori songs. People wandered around with “free hugs” signs, embracing those in need. There were tears, but also smiles.

The students’ vigil was a striking and healing counterpoint to Monday’s developments in the mass shooting.

A Christchurch gun shop acknowledged selling guns online to the 28-year-old white supremacist accused of killing 50 people in shootings at two mosques that have upturned New Zealand’s reputation as one of the world’s most tolerant and safe nations. 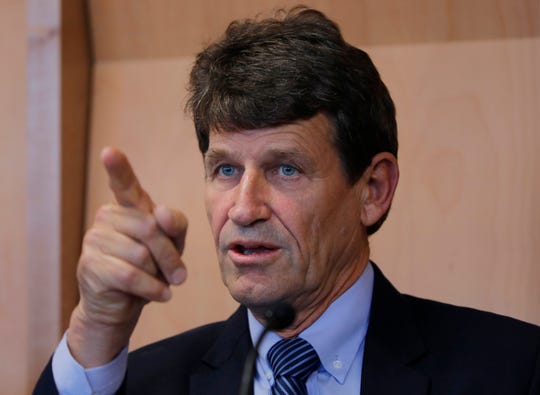 At a news conference, Gun City owner David Tipple said the store sold four guns and ammunition to Brenton Harrison Tarrant through a “police-verified online mail order process.” The store “detected nothing extraordinary” about the buyer, he said.

Separately, Prime Minister Jacinda Ardern said gun law reforms would be announced within 10 days and an inquiry conducted into intelligence and security services that failed to detect the risk from the attacker or his plans. There have been concerns intelligence agencies were overly focused on the Muslim community in detecting and preventing security risks.

Police Commissioner Mike Bush said police are certain that Tarrant was the only gunman but aren’t ruling out that he had support.

“I would like to state that we believe absolutely there was only one attacker responsible for this,” he said at a news conference. “That doesn’t mean there weren’t possibly other people in support and that continues to form a very, very important part of our investigation.”

None of the guns sold to Tarrant were military-style, semi-automatic weapons, according to Tipple. It was not clear if any of the firearms Tarrant purchased from Gun City were used in the shootings.

In vowing to tighten gun laws, Ardern has said the attacker used five guns, two of them semi-automatic, which were purchased with an ordinary gun license and modified.

Tipple said he was disgusted by the killings but felt no responsibility for the tragedy and refused to say whether he believed gun ownership laws should change in New Zealand, insisting that a debate over guns should be held at another time.

His store has been criticized, in the wake of the shootings, for leaving out a roadside advertising billboard that shows a parent helping children with rifle target practice.

Tarrant, an Australian citizen who lived in New Zealand, appeared Saturday in court, where the judge read one murder charge and said more would likely follow.

Tarrant had posted a muddled, 74-page anti-immigrant manifesto online before the attacks and apparently used a helmet-mounted camera to stream live video of the slaughter.

Relatives of the dead are now anxiously awaiting word on when they can bury their loved ones. Islamic tradition calls for bodies to be cleansed and buried as soon as possible after death, usually within 24 hours. 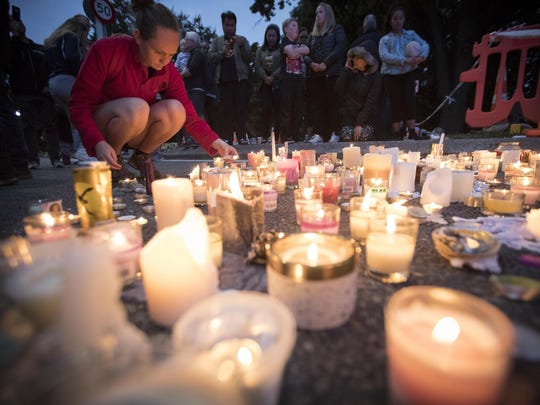 Members of the Muslim community and police were at a cemetery that has been fenced off and obscured with white netting. Backhoes had stopped digging and police officers said they were setting up a media area inside the cemetery.

Kawthar Abulaban, 54, who survived the shooting at the Al Noor mosque, came to the cemetery to see the preparations. She did not mind the row of photographers and reporters lined up outside.

“It’s good for the world to see what’s happened because people around the world, they thought we were terrorists because some stupid people, they said they are Muslims, they go and kill innocent people,” said Abulaban, who migrated to New Zealand from Jordan 17 years ago.

“I will not change my opinion about New Zealand. It’s my country,” she said. “You know I have lots of support, lots of love, lots of kindness from all of the New Zealand people.”