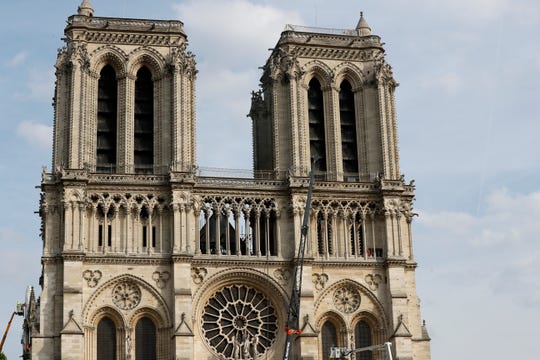 Paris – Paris police investigators think an electrical short-circuit most likely caused the fire at Notre Dame Cathedral, a police official said Thursday, as France paid a daylong tribute to the firefighters who saved the world-renowned landmark.

A judicial police official told The Associated Press that investigators made an initial assessment of the cathedral Wednesday but don’t have a green light to search Notre Dame’s charred interior because of ongoing safety hazards.

The cathedral’s fragile walls were being shored up with wooden planks, said the official, who spoke on condition of anonymity because he wasn’t authorized to speak by name about an ongoing investigation. 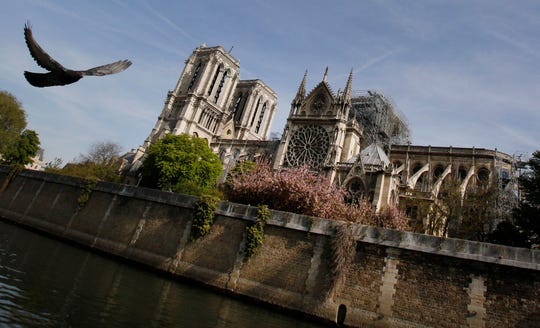 Investigators so far believe the fire was accidental, and are questioning both cathedral staff and workers who were carrying out renovations. Some 40 people had been questioned by Thursday, according to the Paris prosecutor’s office.

The police official would not comment on an unsourced report in Le Parisian newspaper that investigators are looking at whether the fire could have been linked to a computer glitch or the temporary elevators used in the renovation work, among other things. The prosecutor’s office said only that “all leads must be explored.”

Since the cathedral will be closed to the public for years, the rector of the Catholic parish that worships there has proposed building a temporary structure on the plaza in front of the gothic-era landmark, and City Hall gave its approval Thursday “subject to technical restraints.”

“The rector has no cathedral for the moment. …. But I’m going to try to invent something,” Bishop Patrick Chauvet said.

A crypt containing vestiges dating from antiquity is located under the vast esplanade.

President Emmanuel Macron has said he wants Notre Dame to be restored in five years, a timeline that restoration specialists have questioned as overly ambitious, with some saying it could take three times that long to rebuild the 850-year-old architectural treasure. Macron hopes to reopen the cathedral in time for the 2024 Summer Olympics, which Paris is hosting. 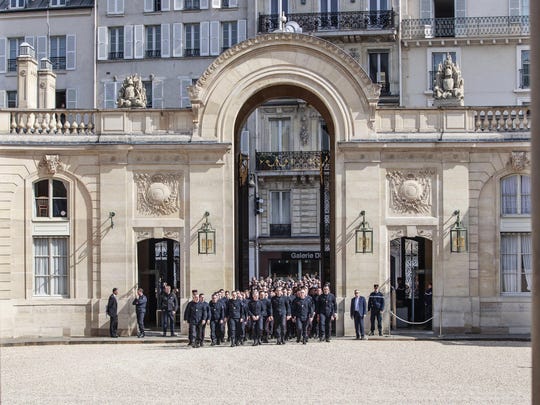 Firefighters and security forces who took part to the fire extinguishing operations at Notre Dame of Paris Cathedral, arrive for a ceremony at the Elysee Palace in Paris, Thursday, April 18, 2019. (Photo: Christophe Petit Tesson / AP)

Earlier Thursday, Macron held a ceremony at the Elysee Palace to thank the hundreds of firefighters who battled the fast-moving fire at Notre Dame for nine hours starting Monday evening, preventing the structure’s destruction and rescuing many of the important relics held inside.

“We’ve seen before our eyes the right things perfectly organized in a few moments, with responsibility, courage, solidarity and a meticulous organization”, Macron said. “The worst has been avoided.”

Macron said the firefighters will receive an Honor Medal for their courage and devotion.

Remarkably, no one was killed in the blaze that broke out as the cathedral was in the initial stages of a lengthy restoration.

A large swath of the island in the Seine River where Notre Dame is located was officially closed Thursday by police, who cited “important risks” of collapse and falling objects. The area had been unofficially blocked off since the fire. 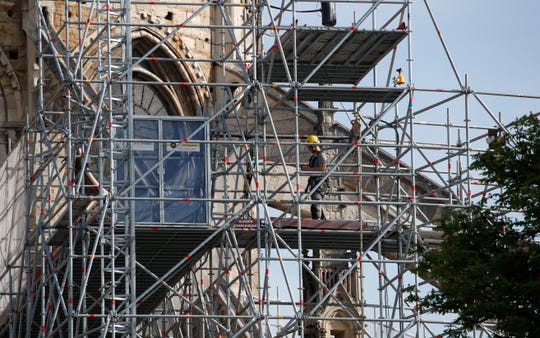 A man works on the scaffolding on the facade of the Notre Dame Cathedral in Paris, Thursday, April 18, 2019. (Photo: Christophe Ena, AP)

Meanwhile, workers using a crane removed some statues to lessen the weight on the cathedral’s fragile gables, or support walls, to keep them from collapsing since they were no longer supported by the roof and its network of centuries-old timbers that were consumed by the inferno.

They also secured the support structure above one of Notre Dame’s rose windows with wooden planks.

Among the firefighters honored Thursday was Paris fire brigade chaplain Jean-Marc Fournier, who told the Le Parisian daily he was able to save the cathedral’s consecrated hosts. The paper said he climbed on altars to remove large paintings, but that he was especially proud “to have removed Jesus” from the Cathedral – a reference to the Catholic belief that consecrated hosts are the body of Christ.

An earlier report credited Fournier with helping salvage the crown of thorns believed to have been worn by Jesus at his crucifixion, but Fournier told France Info Thursday he arrived after rescuers had already broken the relic’s protective covering and an official who had the secret code needed to unlock it finished the job. He praised the action that preserved “this extraordinary relic, this patrimony of humanity.” 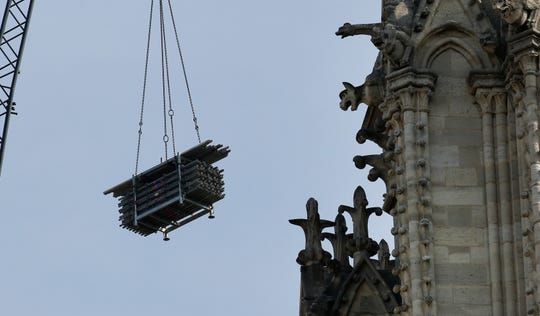 Among others honored was Myriam Chudzinski, one of the first firefighters to reach the roof as the blaze raged. Loaded with gear, they climbed hundreds of steps up the cathedral’s narrow spiral staircase to the top of one of the two towers.

“We knew that the roof was burning, but we didn’t really know the intensity,” she told reporters. “It was from upstairs that you understood that it was really dramatic. It was very hot and we had to retreat, retreat. It was spreading quickly.”

Benedicte Contamin, who came to view the damaged cathedral from afar Thursday, said she’s sad but grateful it’s still there.

“It’s a chance for France to bounce back, a chance to realize what unites us, because we have been too much divided over the past years,” she said.