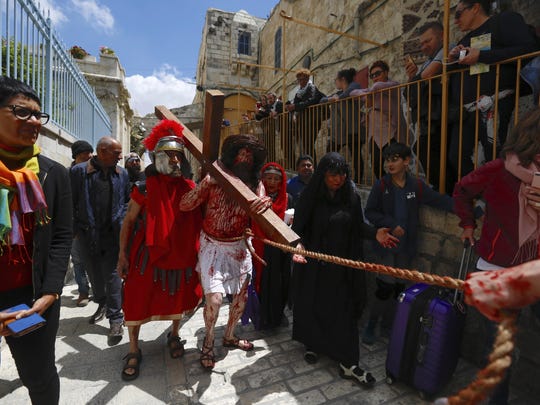 An actor dressed as Jesus Christ carries a cross as he reenacts the crucifixion walk along the Via Dolorosa towards the Church of the Holy Sepulchre, traditionally believed by many to be the site of the crucifixion of Jesus Christ, during the Good Friday procession in Jerusalem, Friday, April 19, 2019. (AP Photo/Ariel Schalit) (Photo: Ariel Schalit / AP)

The faithful carried wooden crosses high on their shoulders and sang hymns to mark one of Christianity’s most solemn and sacred days.

The confluence of Good Friday and the Jewish holiday of Passover this year led to flocks of tourists and a festive atmosphere in the holy city.

Worshippers from all over the world marched slowly along the Via Dolorosa, the cobblestone path that cuts through the limestone-walled Old City, where tradition says Jesus bore the cross to his crucifixion. The pilgrims stopped at several points on the way, re-enacting symbolic moments from Jesus’ story.

The procession culminates at the Church of the Holy Sepulchre, where Catholic and Orthodox Christians believe Jesus was buried before his resurrection on what is celebrated as Easter Sunday.

Meanwhile Friday, Jewish residents were rushing to complete their preparations for the ritual Seder dinner as the first night of Passover approached. In Jerusalem’s Mahane Yehuda outdoor market, a tumult of shoppers swarmed the stalls, filling their bags with ingredients for the holiday feast. Many observant Jews cleaned their homes of “chametz,” or leavened wheat, traditionally forbidden during the eight days of Passover to commemorate the Jewish people’s flight from slavery in Egypt, which didn’t allow time for dough to rise into bread.

The Chabad-Lubavitch movement, one of the world’s largest Jewish religious organizations, has arranged Passover seders in over 100 countries for Jews who seek them, even in some far-flung corners of the globe, such as Congo and rural Australia. At sundown, Jews gather around dinner tables to tell the Passover story that celebrates their deliverance from slavery in Old Testament times.