Oil prices have struck 2019 highs in the the wake of the U.S. move to impose sanctions on countries that buy Iranian oil 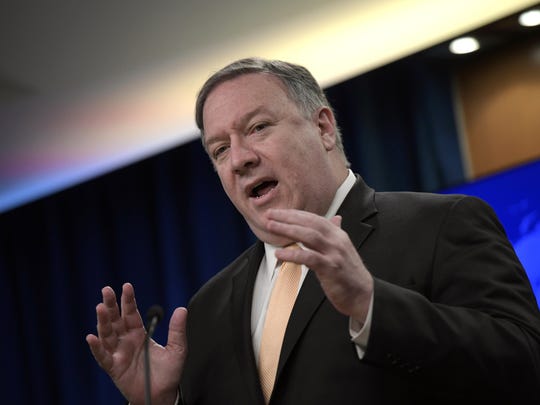 Secretary of State Mike Pompeo speaks during a news conference on Monday, April 22, 2019, at the Department of State in Washington. The Trump administration on Monday told five nations — Japan, South Korea, Turkey, China and India — that they will no longer be exempt from U.S. sanctions if they continue to import oil from Iran. (Photo: Sait Serkan Gurbuz / AP)

Frankfurt, Germany – Oil prices have struck 2019 highs in the the wake of the U.S. move to impose sanctions on countries that buy Iranian oil, and analysts said Tuesday that oil could get still more expensive.

The U.S. announced the sanctions in November but some countries got temporary waivers that allowed them to import Iranian oil. The U.S. now says those waivers expire May 2. Prices haven’t been this high since late October, before the waivers were announced.

Among those affected are China, India, Japan, South Korea and Turkey. U.S. Secretary of State Mike Pompeo said Monday the U.S. is counting on ally Saudi Arabia and other producers to ensure sufficient supply, along with increased U.S. production.

President Donald Trump made the decision as part of the administration’s “maximum pressure” campaign on Iran that aims to eliminate all of its revenue from oil exports that the U.S. says funds destabilizing activity throughout the Middle East and beyond.

Energy analysts at Raymond James & Associates are warning that the U.S. imposition of tougher Iranian oil sanctions is “unambiguously bullish” for the price of oil. The analysts said in a report Saudi Arabia will take its time to ramp up oil production to make up for the lost Iranian oil exports.

Trump announced sanctions last year, but then gave countries waivers to keep importing from Iran. The waiver announcement wrong-footed key oil producing countries in the OPEC cartel after they had increased supply in expectation of lower Iranian exports.

The analysts wrote that the Saudis, along with Kuwait and the United Arab Emirates, “will likely be much more wary about increasing production in advance of clear evidence that Iranian supply is falling.”

They said the Saudis would likely start ramping up production in the third quarter of this year, once a decline in Iranian supply is confirmed.

The European Union criticized the U.S. decision and warned that the move could damage an international effort to stop Iran developing nuclear weapons.

Trump pulled out of that pact last year, saying it does nothing to stop Tehran developing missiles or destabilizing the Middle East. Since then, the EU has put measures in place to side-step U.S. sanctions on Iran, including a way to keep financial supply lines to Tehran open and protect European businesses operating there.

Lorne Cook in Brussels contributed to this report.